SINGAPORE/TOKYO/PHNOM PENH -- The race to woo China's gamblers is fueling an investment arms race in Asia's casino industry, with planned spending on new and expansion projects projected to top $65 billion over the coming years.

But while casino operators in Singapore, Macao and elsewhere set their sights on bigger and more lavish resorts, questions are mounting over whether there will be enough demand to go around -- particularly as China's economy slows and Japan prepares to enter the casino market.

In Singapore alone, casino operators have earmarked more than $6 billion for expansion projects.

"We are adding different amenities and attractions to continue to draw people to Singapore and keep our side ahead of the competition," George Tanasijevich, the chief executive officer of Marina Bay Sands, told the Nikkei Asian Review in May.

Parent company Las Vegas Sands announced in April it will invest $3.3 billion to expand its iconic resort in Singapore, marking the first major expansion since it opened in 2010 at a cost of $5.5 billion. By 2027, the U.S.-based operator plans to build an arena and exhibition halls, as well as a luxury hotel tower with 1,000 all-suite rooms, each more than 90 sq. meters in area. The resort already has more than 2,600 hotel rooms, with an occupancy rate of over 95%, according to the company.

Marina Bay Sands' $3.3 billion expansion is "huge," Tanasijevich acknowledged, but its property EBITDA in fiscal 2018 was $1.69 billion. Although this was down 3.7% from the previous year, the property is considered one of the most successful casino resorts in Asia. Marina Bay Sands is planning to build its fourth tower in Singapore.

In exchange for a higher tax rate, the government authorized Marina Bay Sands to expand its casino facility by 13%, and allowed it to maintain its casino duopoly until 2030 with Resort World Sentosa -- which also announced a $3.3 billion expansion plan in April.

Though seemingly massive, the amount of money being poured into these two resorts reflects a wider trend toward sprawling resort developments with large non-gaming offerings, according to Global Market Advisors senior partner Andrew Klebanow.

Operators in Macao, Asia's gambling hub, are among those expanding their facilities in a big way, in part to convince the government to renew their licenses -- all of which are set to expire in 2022.

SJM Holdings is building the Grand Lisboa Palace, which is expected to open later this year, at a cost of HK$36 billion ($4.5 billion), while Galaxy Entertainment plans to expand its iconic Galaxy Macau in two phases in the early 2020s, with total spending expected to reach HK$45 billion. U.S.-based Wynn Resorts and MGM Resorts International, as well as Hong Kong’s Melco Resorts & Entertainment have also revealed expansion plans. 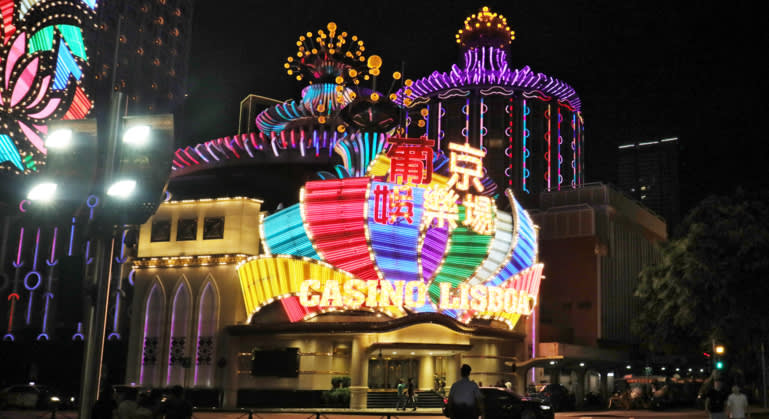 Cambodia and Vietnam, meanwhile, are keen to lure Chinese players away from Macao.

Hong Kong-listed NagaCorp plans to spend $3.5 billion to open a third resort in Phnom Penh, where it already enjoys a monopoly. Chairman Timothy Patrick McNally is confident that the "payback will be within a very reasonable period of time" thanks to the country's political stability and growing demand in tourism and business, as he told Nikkei in May.

Next door in Vietnam, plans for several integrated resorts were announced following government moves in 2017 to liberalize the gaming sector. The Corona Resort and Casino on Phu Quoc island opened in January, while a $2 billion development in Van Don, in the northern province of Quang Ninh, is due to open in 2022. The two resorts are part of a pilot program to allow locals to gamble at casinos.

The Hoiana, a $4 billion project on Vietnam's Central Coast, is set to open this year. Macao junket operator SunCity, VinaCapital and Hong Kong's VMS Investment Group each hold a one-third stake in the project. The Hoiana, which is not part of the local gambling pilot, will include a 140-table casino, two golf courses, a man-made lagoon, a water park and four beach resorts built over two stages.

And then there is Japan, which will likely see billions poured into its first three integrated resorts, set to open in the latter half of the 2020s. Three of the principle bidders for Japan's first licenses -- Las Vegas Sands, MGM and Melco -- have each expressed their willingness to invest over $10 billion to build resorts in major cities. 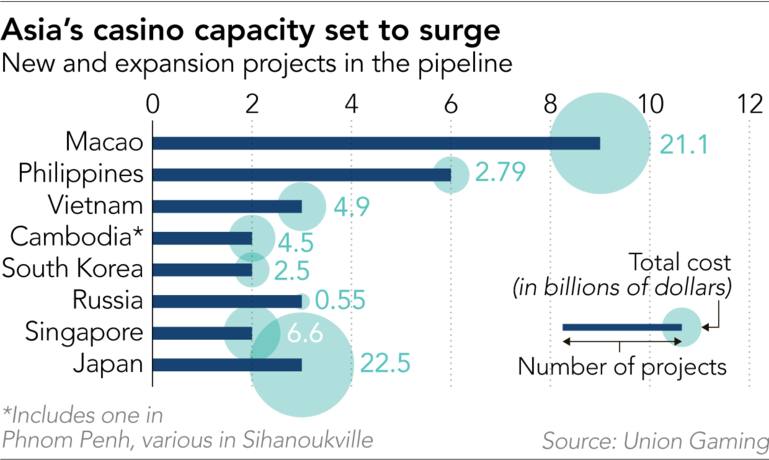 The total amount of investment in the pipeline for Asia's gaming industry currently exceeds $65 billion, according to a report issued in May by equity research company Union Gaming, which says the surplus in supply could see some of these planned projects fail.

"Given the scale of the pipeline relative to the EBITDA required to justify it, we think -- for the first time in Asia -- the amount of new supply is simply too much over too short a period of time," analysts Grant Govertsen and John DeCree wrote in the report. According to them, the amount of investment should be spread out over 15 years instead of the next five or six years.

"The reality is that the current pipeline in just the existing markets requires EBITDA in Asia to literally double," they said.

It is easy to see why casino operators and governments in Asia are confident in aggressive expansion, given that region has long been a major engine of the global gaming industry. Macau's gambling revenue in 2018 reached $37 billion, according to the city's gaming regulator, up 14% from the previous year and six times that of the Las Vegas Strip.

But Asia's gambling industry relies heavily on wealthy Chinese high rollers, which could prove a risk, according to analysts.

"The investments and potential oversaturation of the premium market is a longer-term credit risk that operators with mass-market and geographic diversification may be better positioned than others to withstand," Fitch Rating said in its report published in April. The report downgraded the forecast for Macao's gaming revenue in 2019 to between flat and low single-digit percentage growth, on expectations it will be "negatively impacted by the current economic slowdown on mainland China." Melco Resorts & Entertainment is planning to expand its facilities next to Studio City in Macao. (Photo by Ken Kobayashi)

"There is plenty of demand out there to support these projects provided they are marketed properly," Gallaway told Nikkei. "The bigger risk is not a Chinese downturn but a potential change in political climate that results in [Beijing] turning off the spigot for tourism to a given country or region."

Precedents for this include past restrictions on Chinese visitors to Macau and punitive measures by China against South Korea over its hosting of a U.S. anti-ballistic missile system.

Marina Bay Sand's Tanasijevich said there is a wide range of quality in investments in Asia. "There is always a competition, and we don't take it lightly," Tanasijevich said. "But an 'integrated resort' can mean very different in other operators from what Las Vegas Sands offer. Having a casino with hotel rooms, and a couple of restaurants and three meeting rooms … It is a whole different product from ours,” he says.

"You have to right-size it [for the market], just like any other investment."