AirAsia has built a network of budget airlines across much of Asia but has only been able to find reliable profits in Malaysia. (Photo by Keiichiro Asahara)
YOHEI MURAMATSU and AKIRA HAYAKAWA, Nikkei staff writersMay 28, 2019 13:07 JST | Malaysia
CopyCopied

Budget airlines have become especially popular among the region's enthusiastic middle-class travelers, but their proliferation has resulted in a profit margin of less than $5 per passenger, according to the Association of Asia Pacific Airlines.

An analysis by the Kuala Lumpur-based trade group of the earnings performance at 25 carriers in the region shows total net profit halved to $4.7 billion in 2018, accounting for the low per-passenger profit.

"Asian airlines ... were not able to pass on the full cost impact of significantly higher fuel prices we saw in 2018," said Andrew Herdman, the AAPA's director general. "Asia-Pacific airlines continue to face significant headwinds in the form of persistent cost pressures, stiff competition as well as further volatility in oil and currency markets."

The intense competition is raising questions about the expansion of capacity being pursued by Asian airlines, and the orders they have placed for new jets. It is also sapping the reserves of even the most competitive players. AirAsia Group, Asia's no-frills pioneer, saw its operating profit almost halve in 2018. And some of Asia's full-service legacy carriers find themselves fighting for survival.

Tony Fernandes, AirAsia's chief executive, recently said Malaysia will be the principal source of profits for his airline. The group's operating profit in 2018 plunged 44% from the previous year to 1.2 billion ringgit ($286 million).

While the company remains profitable in Malaysia, where it is based, its operations in Indonesia, Thailand and elsewhere are either losing money or becoming less profitable. Fernandes believes this situation will continue for the time being.

Although AirAsia has become the leading player in the region's fast-growing aviation market, it has not been able to elude the industry's profit crunch due to all the dog-eat-dog competitors Fernandez has inspired.

The Center for Asia-Pacific Aviation, an Australia-based think tank, says the number of seats provided by low-cost carriers has quadrupled in the past 10 years and that Asia's aircraft supply is growing faster than demand. CAPA calls the result irrational competition. More jetliners are on the way. Japan Aircraft Development Corporation, which researches commercial aviation, estimates 37,258 new airplanes will be delivered globally between 2018 and 2037, costing $5.55 trillion. The Asia-Pacific region, by far aviation's biggest market, is expected to buy 15,530 jetliners worth $2.3 trillion during the period, more than Europe or North America.

In 2017, the number of passengers in the Asia-Pacific region surged 11% to 1.5 billion, accounting for a third of the global total. The figure is projected to grow to 3.9 billion in the next two decades. However, ruthless competition in Asia's airline industry has cast a cloud over airlines' growth potential.

The airline industry's average profit margin before tax and interest payments is 6.7% in Asia-Pacific, compared with 11% in North America, according to the International Air Transport Association, or IATA.

Demand for all those new airplanes could dissipate.

In Myanmar, once regarded as a promising frontier market, as many as 11 budget airlines popped up after the country's long-ruling junta made way for a new civilian government in 2011. Five of these carriers have since ceased operations.

In Vietnam, VietJetAir, launched in 2011, has grown at a breakneck pace. It has even overtaken AirAsia in market value, attracting the attention of investors. But competition from new rivals is muddying its business outlook.

In January, Bamboo Airways, owned by the FLC Group, a big real estate conglomerate, began flying. It is luring passengers by offering low fares for large seats in state-of-the-art aircraft. Chairman and CEO Trinh Van Quyet is confident about the company's ability to beat rivals. 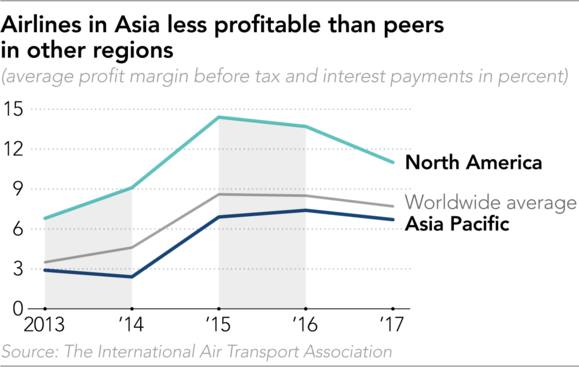 Many of Asia's full-service carriers are having a particularly difficult time staying afloat as budget airlines pick off more of their customers with the bait of low fares.

At Mumbai's international airport, what used to be Jet Airways counters are now used by budget airlines. The company that revolutionized Indian aviation after the government ended state-owned carriers' monopoly, is on the brink of bankruptcy.

It suspended all flights on April 18 after it ran out of money. Its aircraft have been perching still for more than a month, and Indian authorities have reportedly reallocated Jet Airway's international flying rights on some routes to other carriers, including IndiGo, the country's largest airline, operated by InterGlobe Aviation.

Jet's hardship arose despite the number of domestic passengers having doubled in the past five years.

Thai Airways International, a financial headache for successive Thai governments over the decades, on May 16 posted an operating loss of 828 million baht ($26 million) for the quarter ended March, down from an operating profit of 3.8 billion baht for the year-earlier period.

In March, Malaysian Prime Minister Mahathir Mohamad said he was considering two choices in regard to Malaysia Airlines: whether to shut down or sell the country's financially troubled national carrier. "I love MAS," he said. "I want MAS to be a national airline, but it looks like we cannot afford it."

The airline has suffered tremendously since 2014, when one of its jetliners disappeared and another was shot down over Ukraine. Malaysia Airlines announced on May 27 a business tie-up with Japan Airlines, but it is unclear whether the cooperative alliance will help the carrier extricate itself from its predicament. In Europe's liberalized airline industry, some flag carriers have sought to stay alive through cross-border mergers, the most notable example being the marriage between KLM and Air France. But the merger route is not viable in Asia, where many legacy carriers are government-owned and have foreign-ownership restrictions, according to an airline industry expert.

Thai Airways plans to team up with Airbus to offer maintenance, repair and overhaul services that will mainly target budget airlines.

Competition is also squeezing the industry in China, a vast state-controlled market insulated from the kind of cutthroat battles that have hobbled carriers in Southeast Asia and India.

Last May, a senior Chinese civil aviation official said the country's international air transportation sector had entered a new stage and that competition would gradually increase.

The country's Civil Aviation Administration had long protected domestic airlines by limiting competition through measures like allowing only one Chinese airline to operate certain long-haul routes, including those to U.S. and European destinations.

Five months after the aviation official's announcement, the restriction was partially removed. In the fall, Air China will start operating flights between Shanghai and London, a lucrative route that has long been monopolized by China Eastern Airlines.

China's move to introduce more competition to its airline industry is aimed at boosting consumer benefits, an aviation analyst said.

The analyst says airfares are bound to decline. If they do, Chinese airlines would find themselves under a huge amount of pressure.

Mayuko Tani in Singapore and Yusuke Hinata in Guangzhou contributed to the article.