Environmental concerns no longer an issue only in Western markets TOKYO -- Signs that a consumer backlash against palm oil is spreading to Asia has prompted companies in the region to take action, from pledging to adopt sustainable sourcing to joining international certification standards.

One of Japan's largest supermarket chains Aeon has pledged to source only sustainable palm oil for its private brand by 2020, while Chinese membership in one of the world's most stringent certification regimes has soared in the last five years.

These moves come amid an ongoing spat between Malaysia and the European Union over imports of palm oil for use in bio fuels. The environmental impact of palm oil -- which is used in consumers goods ranging from toothpaste to snacks to cosmetics -- has long been a hot-button issue in the West, where it has sparked calls for boycott and other action against the industry.

A similar backlash in Asia could hit palm oil growers and consumer goods companies even harder given the scale of the market. While the EU consumes around 10% of the world's palm oil, the top four Asian markets -- India, Indonesia, China and Malaysia -- accounted for nearly 43% of consumption by volume in 2017.

Malaysia and Indonesia maybe have the most to lose if Asia sours on the commodity -- the two together account for 85% of global output.

Corporate users in Japan have been particularly eager to improve palm oil's image.

The Roundtable on Sustainable Palm Oil, established in 2004 by palm oil industry players and environmental groups, provides certification for growers and producers, and members are obligated to purchase only RSPO-approved oil. The organization says it has seen an influx of Japanese and other Asian members recently.

"Nearly 40 Japanese companies joined RSPO in 2018, while less than 10 companies annually joined it in previous years," said Sayuri Ito, a spokesperson at WWF Japan, which supports RSPO's activities in the country. "I've never seen Japanese companies being passionate about considering the purchase of sustainable palm oil."

A major incentive for Japanese companies to act is Tokyo's hosting of the 2020 Summer Olympics. Procurement guidelines for the event require companies involved to source sustainable palm oil that is not linked to deforestation or child labor.

International attention from next year's event "could lead environmental groups to put pressure on Japanese snack makers, like what happened to Nestle," according to Tatsuaki Hirosawa, executive officer at Fuji Oil Holdings, Japan's biggest palm oil processor. In 2010, Greenpeace launched a boycott of the Swiss company in which it alleged that production of KitKat chocolate bars was linked to deforestation and orangutan deaths.

"Such movements would directly impact consumer sentiment," the executive added.

Fuji Oil is among those looking to get ahead of such risks. Japan's biggest palm oil processor joined RSPO the year the organization was founded and recently set up a joint project with Malaysia's United Plantation, the world's first RSPO-certified plantation owner. United Plantations sees its green credentials as a major selling point. "We wanted to capitalize on our unique position as the most sustainable palm oil producer," Vice Chairman Carl Bek-Nielsen told the Nikkei Asian Review.

Fuji Oil seems to agree, with Hirosawa describing the plantation owner as an "indispensable partner."

Other Japanese companies are following suit. Major trading house Marubeni announced in November it will begin building up its inventory of RSPO-certified palm oil-based fatty acids so that customers -- particularly small and midsize manufacturers -- can buy it in small amounts.

And Aeon, one of the largest supermarket chains in Japan, said it will start procuring RSPO-certified palm oil for its private label from March 2019 and will source 100% certified oil by fiscal 2020.

Changes are also afoot in China, with 48 companies joining RSPO since 2017, up from almost none five years ago. This brings the total number of Chinese members to around 90.

China is the third-biggest importer of palm oil in the world after India and the EU, and it is involved in the industry across the region. "There's increased collaboration across markets," said Stefano Savi, head of global engagement at RSPO. "A number of our China-based members have tie-ups with Malaysian producers now."

RSPO tightened its standards during its annual revision in November. Recommendations that companies "should not" practice deforestation, use peat or exploit workers have been made mandatory. 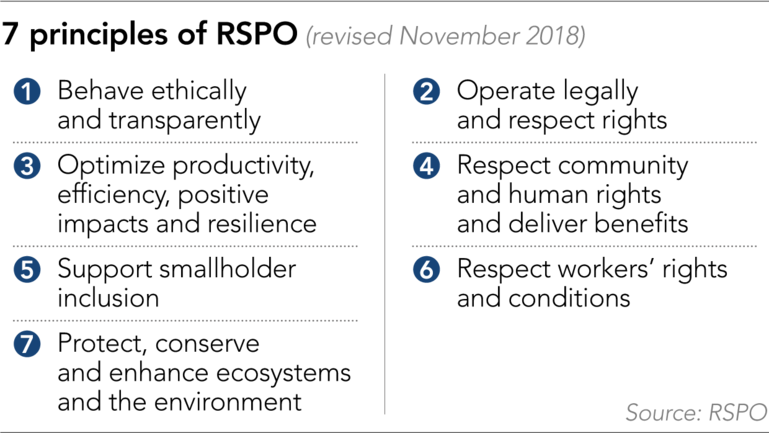 The group's 4,000 members are meant to abide by seven environmental and social principles, as well as a set of concrete criteria aimed largely at increasing the transparency and sustainability of sourcing.

The strict requirements and high costs of meeting international guidelines, however, led the Indonesia and Malaysian governments to introduce their own certification regimes: ISPO in 2011 and MSPO in 2013. These are aimed at providing smallholders -- who manage 40% of Indonesia's plantations -- with certification that is less rigorous but also cheaper and easier to obtain.

Meanwhile the bigger plantation owners and traders in the region are talking up their sustainability efforts, but are quieter on the potential impact of a local consumer backlash.

Sime Darby Plantation of Malaysia, the world's biggest palm plantation owner by planted area, is a founding member of the RSPO and has long boasted of its sustainability efforts. When asked to comment over the recent palm oil controversy, however, a Sime Darby spokesperson said only that it is a "government to government issue."

Singapore-based Olam International highlighted its efforts on that front at a recent earnings announcement. Sunny Verghese, co-founder and group CEO of Olam International, speaking at a recent earnings announcement, said the Singapore-based agricultural conglomerate has a policy of "zero exploitation" when it comes to palm oil.

But the overall picture is still less than bright. Of the more than 60 million tons of palm oil produced each year, only 19% is RSPO-certified.

A major problem is that in some of the biggest markets, using certified oil is still too expensive.

RSPO-certified palm oil sells for $40-50 more per ton than noncertified oil, which translates to "a tremendous amount when we purchase in bulk," said a spokesperson at a Japanese food company.

The higher price comes from the added costs of meeting RSPO standards. Traceability requirements, for example, mean that every step in the production process must be recorded.

In India, the biggest consumer of palm oil, it is widely used in chapati bread and other shelf-stable goods. Most food companies there, as in China, prioritize price over sustainability.

The profusion of certification standards coupled with the continuing demand for cheap palm oil does not bode well for the future greening of the industry, according to Junji Nagata, a professor of human geography at the University of Tokyo who researches palm plantation in Malaysia and Indonesia.

"We can think of two scenarios for the future: These alternative certifications [ISPO and MSPO] may spread further, giving more options to both producers and consumers, or only certifications stricter than RSPO survive, meaning only noncertificated palm oil ends up being used in markets like China, India or Africa."