Unlike shipping by sea, air delivery is used primarily for small and high-value goods such as electronics and fresh food, when speed is more important than volume. Cargo accounts for about 10% to 30% of total revenues of Asia's major airlines, supplementing their main passenger businesses.

Singapore Airlines saw its cargo revenue decline 8.4% in the April-June quarter from a year ago, due to "weaker demand amid trade uncertainties," according to the company. The city-state produces semiconductors and other high-end electronics that are shipped to major trade partners like China and the U.S.

In July, airfreight at the country's Changi Airport declined 7.2% from a year ago while passenger loads increased 3.3%.

Thailand's flagship carrier Thai Airways International saw a bigger impact in the second quarter of 2019, with cargo revenue down 18.8%. This was the result of the slowing global economy and the trade war, according to a company report.

Meanwhile, Japan's ANA Holdings in late August revised its flight schedule for the second half of the current fiscal year ending March 2020. The carrier will reduce its weekly Shanghai-Tokyo (Pudong-Narita) cargo flights from seven to six round trips starting from late December.

"Demand in some international cargo markets has slowed," the company said in a news release. To make up for weak cargo demand, ANA said it will try to increase profitability by "balancing and effectively utilizing the airline chartered cargo space," among other measures.

ANA's cargo revenue dropped 17% in the April-June quarter. Due in large part to weak demand from China, the company has had to lower shipping rates. 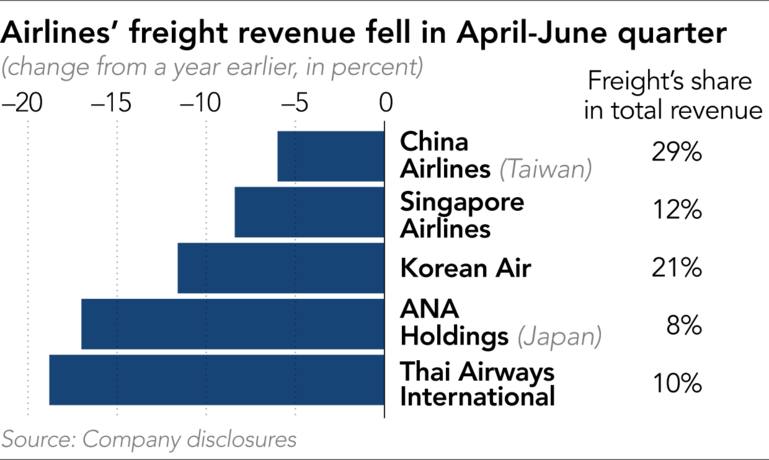 Global air cargo demand has remained anemic, but Asia has been hit especially hard. According to the International Air Transport Association, air freight demand in the Asia-Pacific region contracted for the ninth consecutive month in July by 4.9% from a year ago -- larger than the 3.2% contraction worldwide.

Analyst K Ajith at Singapore brokerage UOB Kay Hian, agreed, telling the Nikkei Asian Review, "Air cargo is a barometer of global trade and the global economy." He said that "Asia-Pacific air cargo is likely to be hit even more" in the coming months as U.S-China trade tensions linger, and this in turn would weigh on the airlines' earnings.

He estimated Asia's cargo woes will likely continue until early 2020.

Some airlines are exploring new markets to increase demand. Korean Air Lines, which is also facing declining cargo revenues this year, has expanded cargo shipments to emerging markets over the past months. It has launched new flights or increased frequency for Southeast Asian routes such as Hanoi and Manila, mirroring supply-chain shifts as manufacturers move from China to countries like Vietnam and the Philippines.

The South Korean carrier also plans to suspend some of its domestic cargo routes.

With no end in sight to the trade war, major airlines now have to cope with the added pressure of slumping cargo operations. 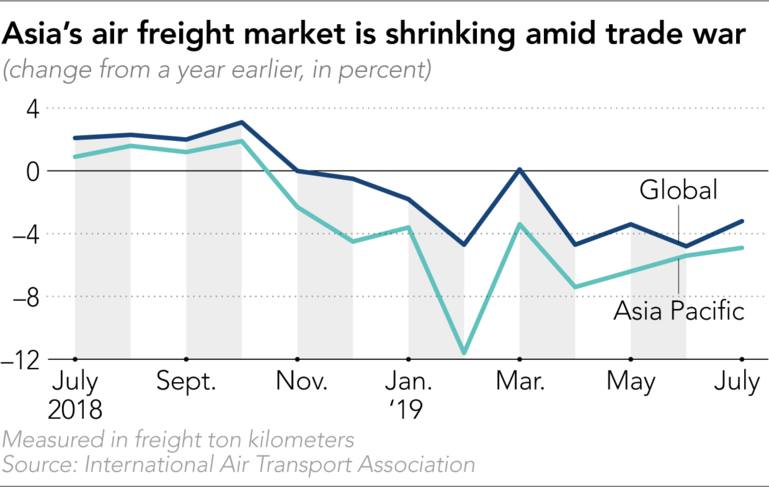