US companies still in lead, but Japan falls behind TOKYO -- Asian companies outside Japan have more than quadrupled their research and development budgets in the last decade with investments in artificial intelligence and information technologies, spearheading a move into a new industrial era.

South Korea's Samsung Electronics ranked third in the world for R&D spending, quadrupling its budget since 2007. China's Alibaba said in October that it will invest $15 billion over the next three years to build research hubs in China, the U.S., Russia, Singapore and Israel. The spending, which for a single year would be double what it spent in 2017, is aimed at accelerating research in AI and the "internet of things."

U.S. companies increased R&D spending by 86% and are still leaders in AI and IT investment. But the ranks of the biggest U.S. spenders on innovation has changed as technology brands displace automakers like General Motors and drugmakers like Pfizer.

Amazon.com had the world's largest R&D budget at $22.6 billion, a 28-fold jump from 10 years earlier. It expanded its AI development team to 5,000 people last year from 1,000 in 2016 as it conducts experimental research on smart speakers and unmanned convenience stores.

Apple ranked seventh in the world at $11.5 billion, a 15-fold increase over the same stretch. It opened a research facility in Japan last year. 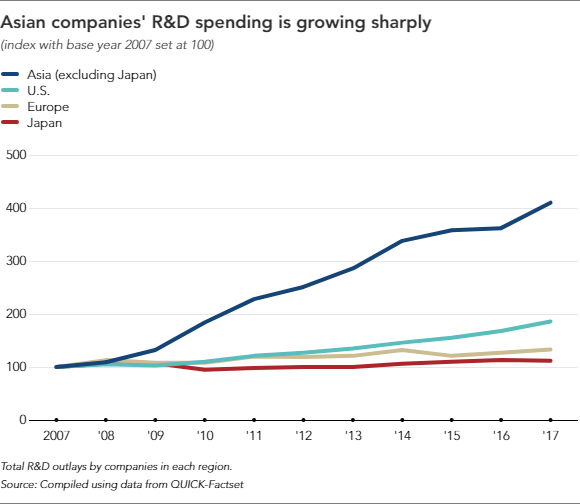 Corporate Japan's R&D spending, meanwhile, rose just 12%. Only 17 companies represented the nation in the top 100 budgets last year, down from 24 in 2007. Toyota slid to tenth from third after increasing investment only 26%.

Japanese electronics makers have actually curbed investment, with Panasonic falling to 36 from 15 in the rankings and Sony to 35 from 18. Electronics makers have retreated from fields that require significant R&D costs like mobile phones and semiconductors while concentrating on the internet of things instead to narrow their budgets.