At your service: Japanese robots move out of the factory 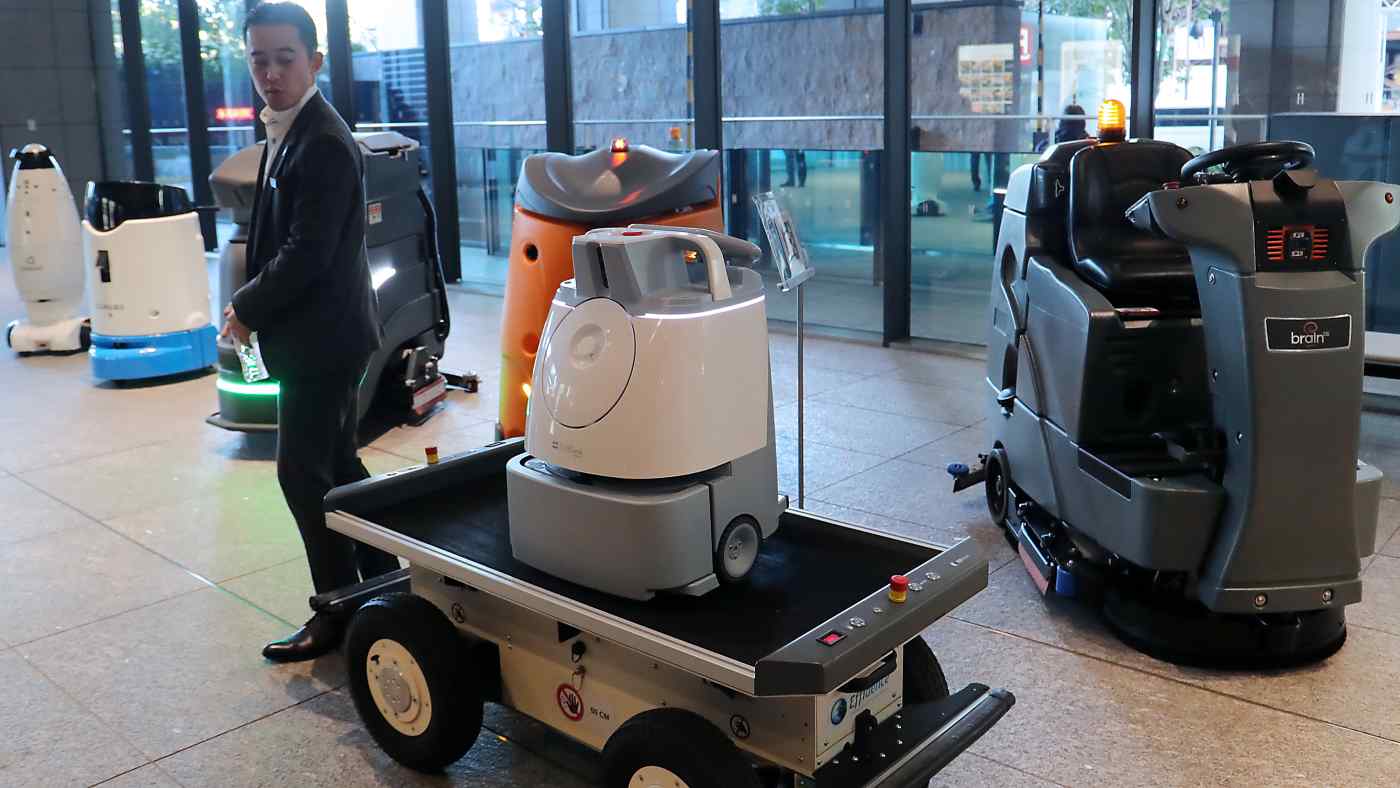 Whiz, a new cleaning machine developed by SoftBank Robotics, starts vacuuming the halls of the real estate company's Tokyo offices. Once a human guide manually puts it on a desirable course, the floor cleaner can repeat the path on its own using sensors and cameras. It also comes equipped with a SIM card that sends data to Brain, a U.S. artificial intelligence startup that updates the software so that it can better avoid humans and obstacles.

Mitsubishi Estate, Japan's largest real estate developer, is one of a rapidly growing number of companies adopting service robots. While robots have long been used in Japanese factories to cut costs, they are coming off the shop floor and into offices, hotels and restaurants.

In recent months, autonomous cleaning robots have been deployed in shopping malls across the western prefectures of Hiroshima and Hyogo, as well as in Osaka station. Izumi Techno, which has five robots working in Hiroshima and other areas, says it can deploy 200 in the next five to 10 years.

The market for robots in Japan's service sector is expected to increase tenfold between 2015 and 2035 to 4.9 trillion yen ($44.6 billion), according to estimates by the New Energy and Industrial Technology Development Organization, a government-backed think tank. At that rate it will easily outpace the market for manufacturing robots, which is expected to hit 2.7 trillion yen by 2035.

"Over the past year we have really seen the first generation of robots that are not fun to play with but can actually substitute for human work," said Ichitaro Shibuya, senior manager at Mitsubishi Estate's office building management department. "For cleaning hallways, robots can already replace 80% of the workload."

Mitsubishi plans to deploy Whiz robots in office buildings, airports and other commercial facilities. The company is also testing a surveillance robot developed by Seqsense, a Tokyo startup, that can move around facilities on its own, take photos of people and send them to a team of monitors.

In Japan, a severe labor shortage and aging population are driving businesses to adopt robots for physically challenging jobs like cleaning. Janitorial companies and security guard dispatchers are working with particularly shallow labor pools. In November there were more than two job openings for every applicant in the cleaning industry. In security, the ratio is 8 to 1. The industry average is 1.6, according to the Ministry of Health, Labor and Welfare. Cleaning robots have been around for years, but many are underutilized because they require dedicated engineers to handle tasks like route mapping and software updates, a SoftBank Robotics manager said. The latest generation of robots, however, focuses on simple functions that also reduce computing power and save battery life. Seqsense's SQ2 robot lasts six hours, long enough to work through a night shift.

Cost is also a factor. Whiz robots lease for 25,000 yen ($230) a month. Each can clean 500 sq. meters an hour. So their "labor cost" is less than that of a human. Seqsense has not yet announced a final price for SQ2 but says renting one will cost less than hiring a security guard, which can cost up to 600,000 yen per month if insurance as well as hiring and training costs are taken into account.

Companies are stepping up their global search for robotic services, and some hope to influence how their own industries develop. Takenaka, one of Japan's biggest construction companies, recently held its first construction robot conference in Silicon Valley in an effort to attract cutting-edge startups there.

Japan is the world's largest producer of industrial robots. But in 2018 it was behind the U.S., Germany, France and China in number of service robot manufacturers, according to the International Federation of Robotics. "The three key factors in industrial robots are precision, speed and durability," said Morten Paulsen, a Tokyo-based analyst at CLSA, an institutional brokerage and investment group. "For service robots, they are safety, cost and easiness to use. The value proposition is very different." Service robots will look very different from the humanoid machines beloved by Japanese. SoftBank's Pepper, the childlike robot launched in 2015 to great fanfare and designed to interact with humans, has yet to prove its practical utility.

"Many robot engineers in Japan grew up dreaming about 'Astro Boy' and 'Mobile Suit Gundam' but think nothing about how they will be useful to society," said Yoji Kuroda, co-founder of Seqsense. "Robots are useless unless they can actually do work, and some [engineers] are beginning to realize that."

Japan's robot industry is also hamstrung by a shortage of venture capital. It took years before Seqsense could secure funding. Finally last year Mitsubishi Estate came through with 500 million yen ($4.5 million). In comparison, Chinese startup UBTech Robotics in May raised $820 million from Tencent Holdings and other investors.

Among the top five service robot markets, Japan has the smallest portion of startups, a signal of a funding shortage.

Despite the rapid development in artificial intelligence, autonomous robots remain in their infancy. At a recent media event, Whiz failed multiple times as the crowd's movements caused the robot to stop. At Henn-na Hotel, guests are greeted by robot receptionists. But the hotel operator, travel agency H.I.S., has been reducing the number of these mechanical front desk workers because they have proved to be not quite up to the job.

Analysts say service robots will be a gauge of countries' competitiveness in fields like delivery drones and self-driving cars. The competition will involve myriad hurdles. The deployment of autonomous cleaning robots on sidewalks, for example, will fuel discussions on the regulatory framework for ensuring human safety.

Whiz only replaces the most mundane of tasks for now, but it may signal the beginning of a sweeping transformation.