The country's summery womenswear is even catching on in China SYDNEY -- On global catwalks, Australian fashion is hot. At least when it comes to womenswear.

For this bit of good fortune, the country can thank its sunny climate, long stretches of sandy beaches and affinity for outdoor activities. These characteristics have inspired Australian designers to create ... let's call it "resortwear."

The genre includes body-con outfits. Australian women are proudly wearing closefitting one-piece dresses and high heels, showing off figures honed at the gym, by running or pursuing other outdoor activities.

"We have a big following in China," said creative director Katie Pratt, who started the brand in 2011. "And [we] have been searching for the right platform to sell on in this market."

Pratt said Vip.com has more than 300 million members, of whom 80% are women. A model walks down a runway during a fashion show held by Elliatt in Melbourne in early March.

China is now Elliatt's fastest-growing market. "And we are still only scratching the surface," Pratt said. "The opportunity is huge."

In early March, Vip.com showed off Elliatt designs during a real-time fashion show on its site.

Zimmermann, founded by sisters in Sydney in 1991, is another rising Aussie star.

The label forayed into the U.S. and Europe in 2011. In February, it reopened a New York store that it had been renovating. Directly managed stores in San Francisco and Los Angeles are set to open in July.

According to Edwina McCann, editor-in-chief of Vogue Australia, Zimmermann "would probably be [Australia's] most successful designer on a global scale ... I think a lot of people not only want to invest in their beautiful designs but also in the Australia lifestyle that Zimmermann has managed to capture and represent so well."

The brand's relaxed vibe matches Australians' love of spending the day outdoors. Zimmermann dresses let women expose their shoulders and show their legs; they accentuate the feminine silhouette and are known for elaborate lace, embroidery and floral prints. A model shows off a dress from Dion Lee's autumn and winter 2018 collection. (Courtesy of David Jones)

Romance Was Born dresses and blouses use colors that seem to be sharpened by Australia's intense sunlight. The label is also catching on overseas.

McCann said Louis Vuitton and other luxury brands are also starting to cater to outdoor types.

From the consumer side of things, Australian-inspired fashions are winning over Brazilian and Southeast Asian women, who enjoy year-round summerlike weather.

Aussie designers have more than momentum at their back; they are also getting export help from government bodies.

Coinciding with a fashion show in early March, the state government of Victoria invited 150 buyers from 14 countries, including those who work for Chinese shopping sites, to a gathering so they could interact with Australian designers.

In October, the government of the southeastern state dispatched 50 designers to Hong Kong to help them develop relationships outside the country.

As for the federal government, the Department of Foreign Affairs and Trade is engaging in "fashion diplomacy," helping to push the country's A$12 billion apparel industry into more overseas markets. Foreign minister Julie Bishop's fashion choices have become a hot topic. She is known to favor Dion Lee outfits and has women yearning for earrings made with large South Sea pearls. Her ministry has showcased Australian designers' work in Paris and other global cities.

"If American fashion stands for sportswear," Vogue's McCann said, "and we know Paris is [about] creativity, then Australia could be considered the home of resortwear." 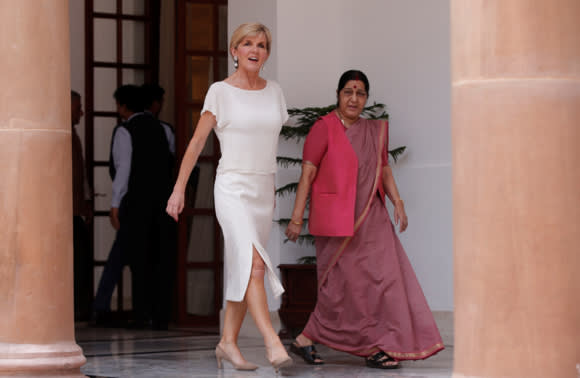 Australian Foreign Minister Julie Bishop, who has become something of a fashion ambassador, talks with her Indian counterpart Sushma Swaraj in New Delhi on July 18, 2017.   © Reuters