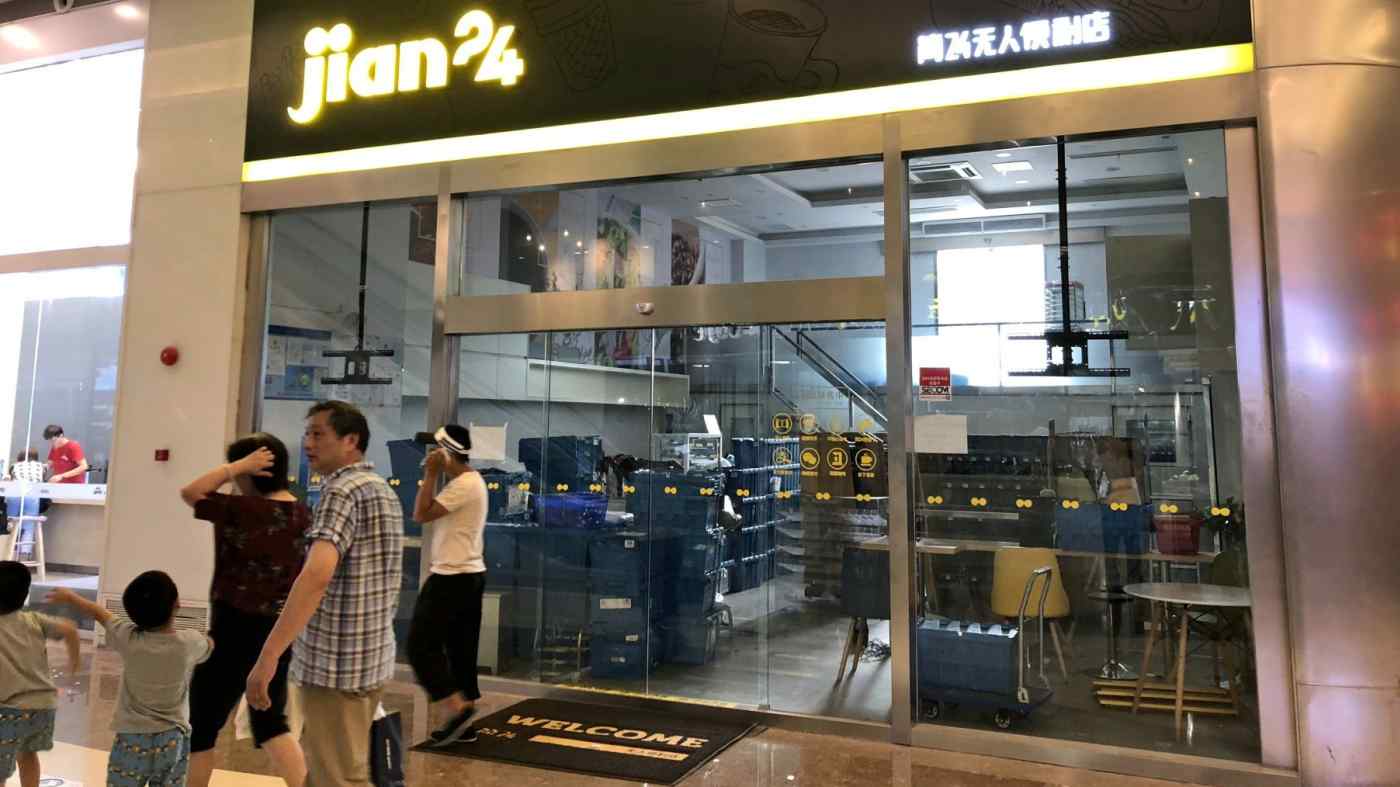 SHANGHAI -- Chinese convenience stores are rushing to adopt automation, often with limited success, and the chains are looking to their experienced counterparts in Japan for other inspiration to stand out in a packed market boasting over 70 operators.

A new player in the industry showed off an unstaffed store featuring the latest technology, including artificial intelligence and facial recognition, at a May meeting of the China Chain Store & Franchise Association. "From now on, stores will have to be built with AI," a representative of the company said at the meeting.

Such buzzwords have helped upstart chains attract an influx of investment capital, fueling the proliferation of unmanned stores.

Jian24 opened its first staffless shop in Shanghai last October. Customers must first register their facial data and a payment method such as Alipay on the company's smartphone app. When they visit, their faces and smartphones are scanned at the entrance. In-store cameras note which items they pick up, and payment is handled with another smartphone scan at the exit.

But these stores have yet to work out all the kinks. A Jian24 location in Shanghai closed recently, with a sign on the door saying repairs were underway. The phone number on the sign connected to a company representative, who acknowledged that no timetable existed for reopening the store.

Elsewhere, malfunctioning entrance and exit gates have forced normally automated shops to have staffers ring up purchases like at any other convenience store.

JD.com, China's second-largest e-commerce company, looks to open 500 unmanned stores this year, but it has struggled to implement the concept on a larger scale. Only about 20 locations are operating so far.

If the systems at staffless shops fail to function properly, customers could shoplift or introduce tampered products into a store's stock. Though the "move fast and fix problems later" mindset is common in China, the technology still needs much work.

Many chains also focus too much on automation technology while neglecting product selection, resulting in lineups consisting mostly of national brands that can be found anywhere. Novelty alone soon will be insufficient to attract increasingly sophisticated Chinese consumers.

The booming market gives operators incentives to find other ways to compete. The number of convenience stores in mainland China rose by 12,000 last year to 106,000, while the market expanded 23% to 190.5 billion yuan ($27.8 billion), data from the chain store association shows.

Yet the industry appears to have plenty of room for further growth. Shanghai, where competition is especially fierce, hosts one store for roughly every 3,200 customers. In Japan, which has a half-century of convenience store experience, the saturation point is said to be around 2,000 customers per location.

Japanese chains themselves are opening Chinese stores in record numbers. Lawson plans 800 new locations there this year, while FamilyMart Uny Holdings targets more than 300 and Seven & i Holdings aims to set up around 200 7-Eleven outposts.

These stores set themselves apart from local competitors with different products and displays, such as cases with prepared food next to registers and extensive selections of boxed meals and sweets. The Japanese tourism boom also has provided a boost to brands from the country.

Japanese convenience stores once struggled to turn a profit in China, but improving conditions have inspired chains to go on the offensive. "If we don't hold on to market share, we won't survive as winners," Lawson President Sadanobu Takemasu said.

Many local stores are learning from the strengths of Japanese rivals. Industry newcomer Bianlifeng's shops feature glass-fronted cabinets with fresh and packaged foods that customers can access with an app. Chinese companies also are starting to compete on private-label goods, something their Japanese counterparts have done since 2000 or so.

Though unmanned stores remain a work in progress, Chinese operators are showing more creativity than those in Japan. Some are competing on the volume front as well. Meiyijia, China's largest convenience store chain, opened 2,300 new locations last year alone. Quantity, quality and technology all will be key in the battle for this massive market.