Bangladesh fights for future of its garment industry DHAKA -- A two-hour drive south from the crowded streets of Dhaka, a modern apparel factory stands along dusty streets lined with ramshackle stalls and busy with rickshaws. The state-of-the-art factory can produce 240,000 men's suits per month for western apparel brands such as Sweden's H&M and Britain's Marks & Spencer.

"We used to cut by hand. Now we use machines. You needed 15 people before. Now you need only two," said Chethiya Jayakody, chief executive of Universal Menswear, the plant operator. Most of the 4,800 workers -- 85% of them women -- did not have any experience of making suits, but that is no problem for Jayakody. "You have a fully automatic sewing machine. The machine does everything if the operators are not skillful," said the Sri Lankan manager, who previously worked for an American company.

The six-year-old factory cost $35 million to build, but it has made the production of clothing faster, more accurate and less expensive. "We spend a lot of money in automation ... because Bangladesh is not going to be a low-cost country any more," said Jayakody.

Bangladesh is battling to keep its position as the world's second-largest exporter of clothing after China, as it faces intensifying competition from Cambodia, Vietnam, Myanmar and now African countries like Ethiopia as global brands search for cheap labor.

H&M, for instance, imports from an Ethiopian clothing factory it set up with Bangladeshi garment maker DBL. Japan's Fast Retailing, operator of the Uniqlo casual clothing chain, is also eyeing a production base in the African country. Fast Retailing declined to comment for this story.

The competitive pressure has sparked consolidation of what was once a mom-and-pop industry, reducing the number of factories 22% in the last five years to 4,560, according to the Bangladesh Garment Manufacturers & Exporters Association. Those who have survived gain market share, expand overseas and aim to go public.

The industry is an engine behind the country's more than 6% annual growth over the past decade. In the year ending in June, garment exports totaled $30.6 billion, up 8.8% and accounting for 83.5% of the country's total exports, according to BGMEA. 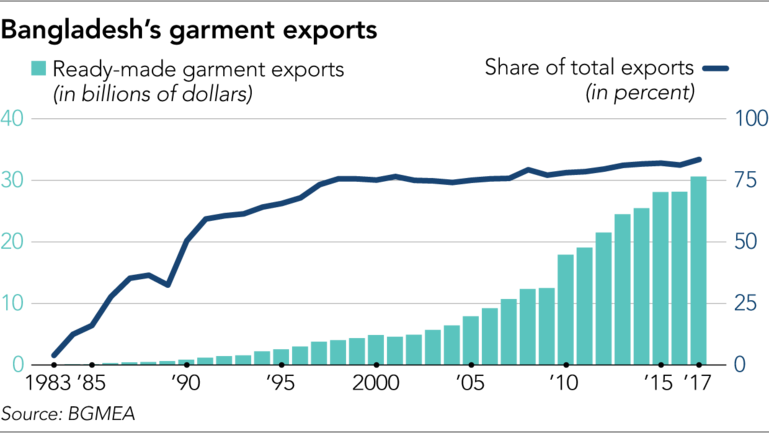 The country also increased its share of global clothes exports to 6.3% in 2016 from 4.0% in 2010, according to World Trade Organization data. But compared with China, which has a share of 34.5%, it is still a distant second along with countries like Vietnam, Italy and India.

Labor in Bangladesh is still cheap. The average monthly wage is just $101, compared with $135 for Myanmar, $170 for Cambodia, $234 for Vietnam and $518 for China, according to surveys on select cities conducted by the Japan External Trade Organization between December 2017 and March 2018.

But there are countries with even lower wages, such as Ethiopia with a monthly average wage of $50.

Labor costs are rising across Asia, and Bangladesh is no exception. With general elections looming in December, the ruling Awami League has approved a 51% wage hike for garment workers, a decision that is weighing on the country's garment industry. Companies operating in special economic zones, such as Universal Menswear, typically offer a 10% wage increase every year. But in election years, which come every five years, the government tends to promise more generous pay hikes.

This has put the industry in a bind, as their Western customers, faced with online competition from Amazon and others, are demanding that prices be kept under control.

Price pressure is intense, says Sharif Zahir, the head of Ananta, a leading apparel maker and the joint venture owner of Universal Menswear. "It's a very tough business," the 41-year-old managing director said. "If you don't work efficiently, you cannot make money." Cost increases are not limited to labor.

Garment makers in Bangladesh have been forced to make major investments in building safety, following a factory fire that killed 117 in November 2012 and the collapse of another known as Rana Plaza in April 2013, which left more than 1,100 dead. Since then, Western brands will not buy from Bangladeshi suppliers unless they are certified to be in compliance with stringent fire and building safety regulations.

Factories in Bangladesh have grown in a haphazard fashion, some even operating on the upper floors of office or residential buildings. Western apparel makers feel more secure buying from countries like China and Vietnam, where manufacturing is better planned and organized.

"After the Rana Plaza tragedy, people would think that Bangladesh is simply a Rana Plaza. Everything is Rana Plaza," said Md. Siddiqur Rahman, president of BGMEA. "Global brands come under pressure to improve or leave Bangladesh."

Today, most of the first-tier export-producing factories have been assessed for risk and have been improved or are in the process of being brought to a comfortable standard, said Tuomo Putiainen, country director for the International Labor Organization. A survey by McKinsey & Co. in 2013 found Bangladesh the No. 1 alternative to China as a manufacturing location. ILO's Putiainen also says that Bangladesh could benefit as production leaves China due to cost and the U.S. trade dispute.

But he added that global apparel brands will remain vigilant about the factory conditions in Bangladesh. 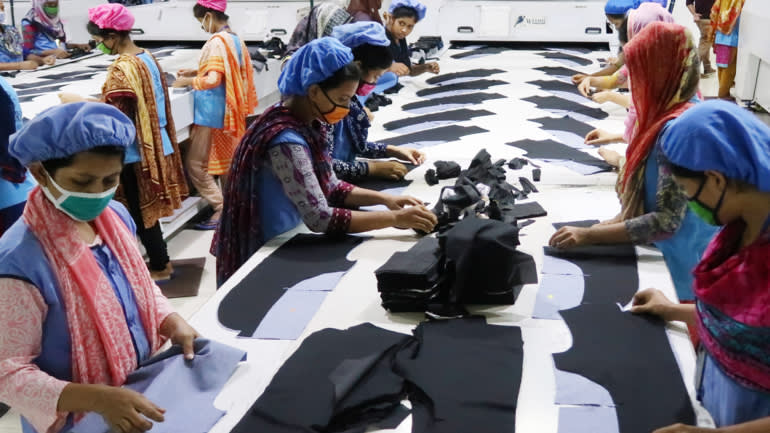 Women make up the bulk of the workforce in the Bangladesh garment industry. (Photo by Mitsuru Obe)

Following the Rana Plaza accident, Ananta faced more price pressure from its customers, who demanded discounts in exchange for continuing to do business.

That is one reason why Ananta, originally a jeans maker, is so keen to diversify into higher value-added items, such as men's suits and lingerie.

The strategy seems to be working. Annual sales have grown 20% to 30%. Sales in the current business year are projected at $300 million, up from $250 million in the previous year. Ananta aims for $1 billion dollars in sales within the next seven years.

DBL, another Bangladeshi garment maker with an annual turnover of $450 million, is also branching out into sports wear and lingerie, according to company head M.A. Jabbar. DBL currently handles only cotton fabric, but "in the coming days, we are looking at man-made fiber," Jabbar said. DBL is also adding upstream processes, such as spinning, dying, printing, fabric washing and embroidery production.

Most garment makers in Bangladesh specialize in knitting operations, with fabrics and accessories imported mostly from China. With materials costs accounting for 65% to 70% of an item's selling price, profit margin is razor-thin.

"If Bangladesh focuses on the knitting business, it will eventually lose to even lower-cost producers like Ethiopia," predicts Yoshiaki Kamiyama, senior researcher at the Japan Textiles Importers Association. "It has to innovate. It has to develop expertise other than just knitting."