DALIAN, China -- China's regional governments are rolling out the red carpet for Japanese companies, eager to bring in new investments as the raging trade war drives manufacturers out of the country.

A four-floor building dedicated to showcasing and selling Japanese food products will open in Dalian on Oct. 17. A unit of state-owned Beijing Capital Agribusiness Group has poured 180 million yuan ($25.4 million) into the project. The food will be imported through Frank Japan, which is 20%-owned by Chinese e-retailer JD.com.

Dalian has heavily backed this project, setting up a customs and quarantine office nearby so the products can be stored fresh. The city "wants to bolster its economy by selling Japanese foods," a source familiar with the matter said.

A total of 1,550 Japanese companies had a base in Dalian as of October 2017, the third-largest figure in any city outside Japan, according to Japan's Foreign Ministry. The city has since leaned even further into Japanese businesses.

The city government in April invited Japanese corporations to their first dialogue, where the mayor ordered officials to tackle any solvable issues as quickly as possible. "I felt that the mayor was incredibly serious about working with more Japanese players," one of the attendees said. 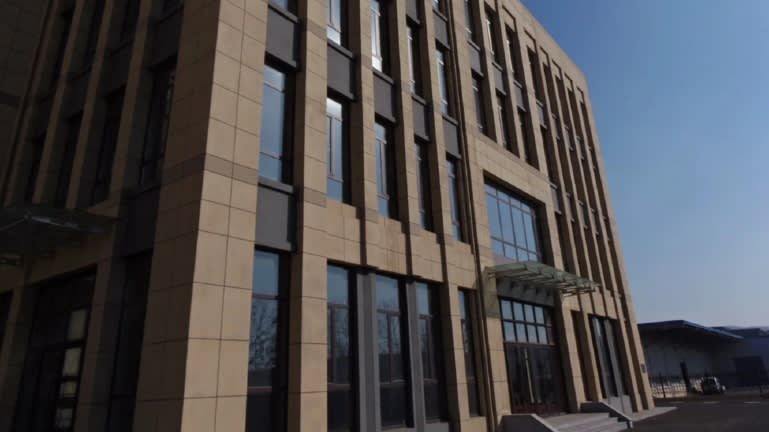 This building in Dalian will specialize in showcasing and selling Japanese food products.

When Nidec decided the same month to set up a new facility in Dalian, the local government provided the electric motor maker with a rental. State-owned airlines are also launching more direct routes from Dalian to Japan, with flights to Kitakyushu starting in August and to Sendai in November.

Officials from Jiangsu and Jilin provinces have also been making the rounds in Japan since April to woo businesses. "We've seen more information sessions designed to attract corporate investment this year than in 2018," according to the Association for the Promotion of International Trade, Japan.

Even lesser-known cities, like Chizhou in Anhui Province and Zigong in Sichuan Province, sent representatives to Japan to prepare information sessions. The Japanese side apparently had to turn them down.

"These municipalities are likely appealing to Japan under orders from the central government," a source familiar with Sino-Japanese ties said. Beijing is believed to be concerned that the trade war is pushing businesses to move production out of China and into areas like Southeast Asia.

But some see the trade dispute as an opening. "We have a window of opportunity while Japanese corporations are welcome," said an executive at trading house Marubeni.

"We will keep taking shots" at new businesses and in other areas, said the executive.