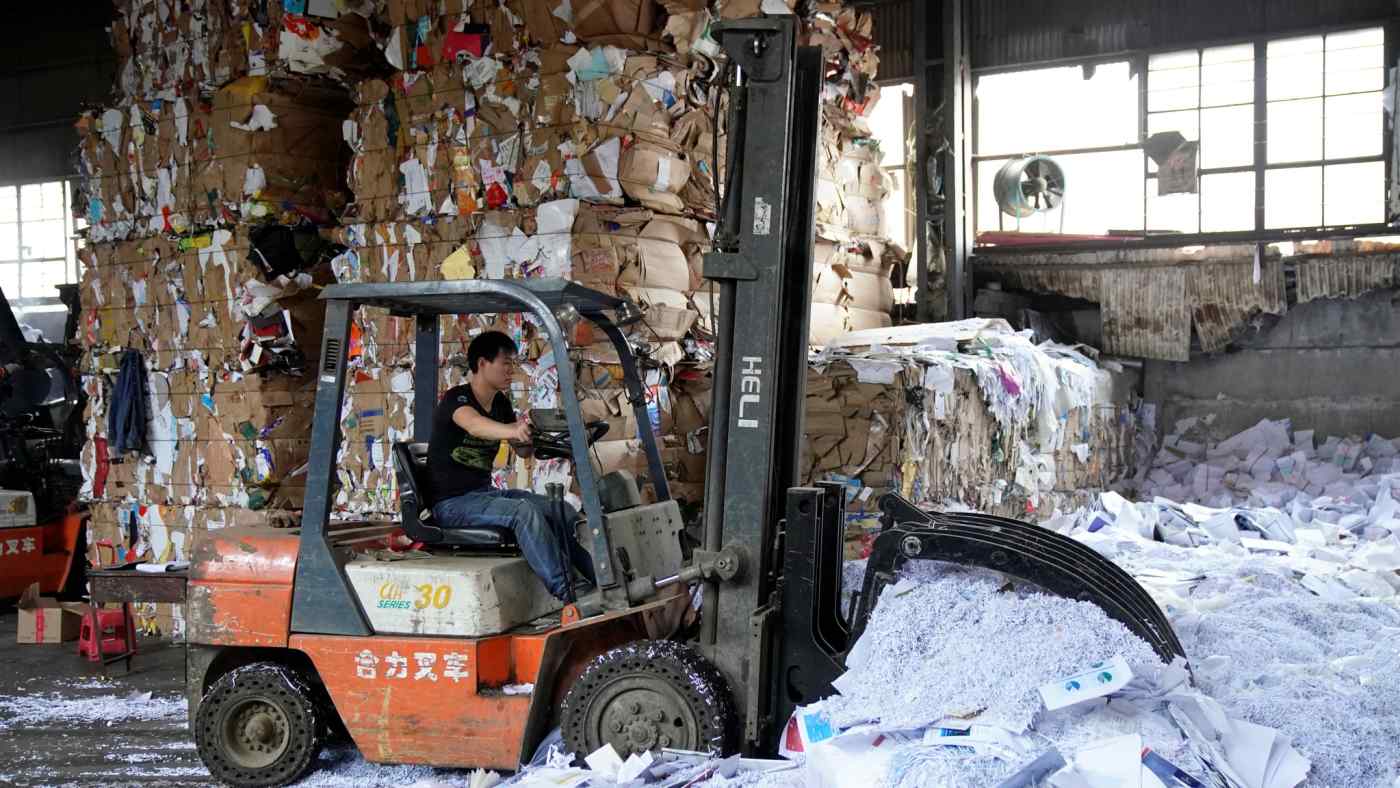 TOKYO -- The effects of China's trade tussle with the U.S. and Beijing's tighter environmental regulations are being felt across the Asian paper market, with Japanese wastepaper exporters in particular enjoying a boost to their bottom lines.

In March, Beijing imposed tougher purity standards on all imports of wastepaper, after which it slapped a 25% tariff on scrap paper from the U.S. in August.

Since then, Chinese paper manufacturers have increasingly turned to Japanese wastepaper, which is generally purer than that found in the U.S. or Europe. As a result, scrap paper exporters in Japan are seeing higher prices for their product.

A large part of their exports is recycled into cardboard packaging, which is in huge demand due to China's booming online shopping sector. During this year's Singles Day shopping extravaganza in November, e-commerce giants Alibaba Group Holding and JD.com logged combined sales of over 6 trillion yen ($52 billion) -- a record high that also required mountains of cardboard packages.

Prices for wastepaper in November charged by paper exporters in the Tokyo area also hit all-time highs, breaking records set in the summer of 2017. The exporters -- all members of the same trade association -- shipped about 1.1 million tons of scrap paper to China in the first nine months of this year, up 47% from the year-earlier period.

But the future for Japanese wastepaper exporters, as well as paper manufacturers, remains uncertain as Beijing has announced that the country will stop importing solid waste by the end of 2020.

Beijing's 2018 quota for all wastepaper imports has been set at roughly 18 million tons. This has seen Chinese papermakers expand imports, fearing quota reductions in 2019 as the government winds down imports.

Despite Beijing's announcement, however, many Japanese wastepaper wholesalers remain bullish, believing that China will not be able to set up a domestic wastepaper collection system sufficient to meet demand by the 2020 cutoff date.

Still, major Chinese paper manufacturers are not taking any chances and are scrambling to secure raw materials. Nine Dragons Paper, China's largest paper company, announced in May it was purchasing pulp mills in the U.S. In 2019, Lee & Man Paper Manufacturing plans to start operating a new facility in Vietnam.

Meanwhile, Japanese paper manufacturers are feeling the sting of higher prices. In November, Rengo and Nippon Paper -- the nation's second- and third-largest cardboard makers, respectively -- revised down their earnings forecasts for the year through March 2019 as rising prices of wastepaper tear into profits.

Wastepaper accounts for 90% of the paper they use to make cardboard.

The wastepaper market is "a real headache, making things really tough for us," said Toru Nozawa, general manager of corporate planning at Nippon Paper. The company has reduced its pretax profit forecast for fiscal 2018 by 2 billion yen.

Their pain is being felt by other Asian paper manufacturers, not the least those in Japan, most of whom have announced plans to raise prices on their products as wastepaper costs continue to surge.