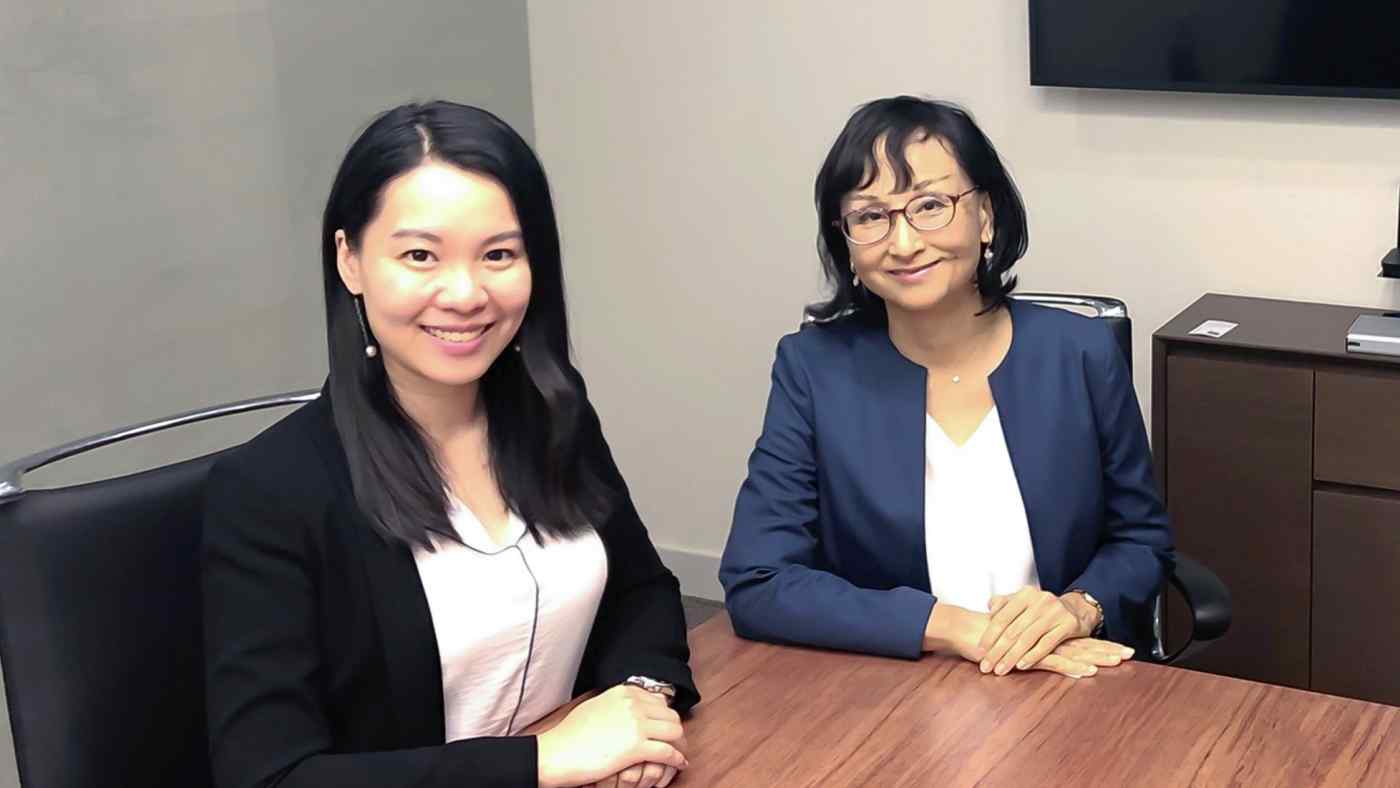 TOKYO -- Big Japanese law firms are expanding operations related to China on expectations corporate demand for their services will keep growing despite the country's tightening control over Hong Kong and U.S. sanctions on the world's second-largest economy.

They are doing so by taking steps such as establishing offices in Hong Kong and also leveraging their presence and expertise in other Asian locations.

"There have been twists and turns, such as political tensions between Japan and China and anti-Japanese demonstrations since we entered China more than 20 years ago," said Hiroshige Nakagawa, partner in charge of Chinese affairs at Anderson Mori & Tomotsune, which opened offices in Beijing in 1998 and Shanghai in 2013. "But we and Japanese companies, which are our clients, take the ups and downs for granted."

The law office currently deploys five Japanese and Chinese lawyers and experts in Beijing and six in Shanghai. In Tokyo and other locations, it has more than 20 lawyers well versed in Chinese affairs, including Nakagawa.

Increasing tensions between China and the U.S. and Europe "are political and will cause only a small impact on general Japanese companies' China business," Nakagawa said, suggesting China's toughened stance on Hong Kong, such as the national security law it imposed on the city in July, will not spur corporate clients to seek legal advice.

"We began to think of establishing a business base in Hong Kong more than 20 years ago," Nakagawa said. "It happened to open now and will remain useful to us." 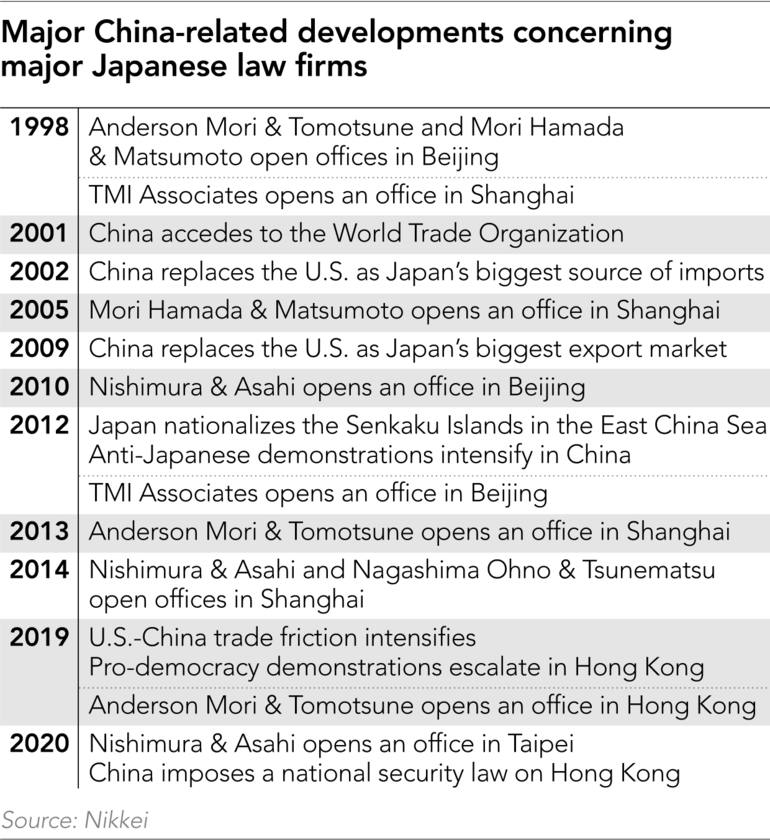 Hong Kong is important to Japanese law firms because some 30% of mergers and acquisitions involve corporations in the city. "Large Chinese and Japanese businesses have holding companies in Hong Kong," Nakagawa said, adding that law firms "need experts on their own because contracts and arbitration involving M&As tend to be subjected to Hong Kong law."

Expecting the trend to continue even under the national security law, Anderson will dispatch Japanese attorneys to the Hong Kong office later this year.

Mori Hamada & Matsumoto has a total of 12 Japanese and Chinese lawyers and experts at its Beijing and Shanghai offices that opened in 1998 and 2005, respectively. The firm has a total of 35 lawyers covering Chinese affairs counting offices in Tokyo and Thailand. "We will increase the number to about 50 in three years' time," said Yuto Matsumura, managing partner at the firm.

It has set an eye on winning demand for legal advice from Chinese companies pursuing global business operations. "Amid (China's) growing tensions with the U.S. and Europe, Chinese companies will seek more opportunities to advance into Southeast Asia, South Asia, Japan and other markets," Matsumura said. "We will thus take advantage of our networks in Asia to support Chinese companies' M&As."

In 2017, Mori purchased a big law firm in Thailand to achieve a leading position in the country. It also has lawyers in Singapore and Myanmar. At those offices in Southeast Asia, Mori will increase lawyers capable of assisting Chinese companies' investment in various Asian economies and M&As. In other words, the firm plans to strengthen its capacity to support Chinese companies by increasing the number of lawyers fluent in Chinese and well-versed in the laws of various Asian countries.

TMI Associates opened offices in Beijing in 1998 and in Shanghai in 2012 and employs a total of 11 Japanese and Chinese lawyers and experts. Including its Tokyo office, some 20 lawyers offer China-related legal services, which have logged yearly revenue gains of 20% to 30%.

While TMI is increasing its number of lawyers at its Beijing and Shanghai offices, "more than that, we want to hire lawyers and experts in Tokyo fluent in Chinese and capable of arranging investment in Japan by Chinese companies as they are expected to again start paying attention to Japan amid the U.S.-China cold war," Tanaka said.

"As China is Japan's biggest trading partner, (Japanese) companies, despite having concerns, have no other choice but to continue doing business with China," said Fumihide Sugimoto, managing partner at Nagashima Ohno & Tsunematsu which formed a partnership with a major law firm in China in 2010 and opened an office in Shanghai in 2014.

"Requests for advice from corporate clients are increasing as the U.S. is toughening sanctions on China and we are dealing with them together with lawyers and others at our office in New York," Sugimoto said.

Adding six Japanese and Chinese lawyers and experts at its Shanghai office, Nagashima has some 30 staff engaging in China-related legal services. It plans to assign a Japanese lawyer to Shanghai later this year.

"We have no specific target," Sugimoto said. "But as China-related services are increasing at a rate of around 20%, we will allocate more people to them."

Nishimura & Asahi, meanwhile, has five Japanese lawyers in total at its Beijing and Shanghai offices that opened successively in 2010 and 2014. "We have no plan to increase lawyers at both offices," said Kei Ito, a partner in charge of Chinese affairs. Mori Hamada & Matsumoto held a ceremony to commemorate the 20th anniversary of its Beijing office at a hotel in China's capital in 2018.

Compared with other big law firms, Nishimura & Asahi is taking a reserved stance on China as it is promoting the development of demand for legal services in Taiwan.

The firm opened an office in Taipei in April and hired three local lawyers. As legal codes are different between Taiwan and China, mainland Chinese lawyers are not allowed to provide services there.

While Taiwan is known as a hub for semiconductor and information technology companies, it is drawing attention lately as the world's biggest market for offshore wind power generation. With Japanese companies showing interest in energy products in Taiwan, Nishimura & Asahi will recruit excellent local lawyers to meet demand for legal services concerning investment and M&As.