Theerathon Bunmathan of the Yokohama F. Marinos is one of five Thai footballers plying their trade in Japan and helping the J-League grow its popularity in their home country.   © Kyodo
AKITOMO KISHINA, Nikkei staff writerAugust 13, 2020 13:05 JST | Japan
CopyCopied

TOKYO -- The J-League, Japan's pro soccer circuit, had a big weekend -- in Thailand.

On Saturday, Thais were particularly interested in a game between the J-League's Shimizu S-Pulse and Consadole Sapporo. The game pitted two Thai stars against each other, Shimizu's Teerasil Dangda and Sapporo's Chanathip Songkrasin. Chanathip, 26, is a national hero back home, and Teerasil, 32, is a member of the Thai national team.

The J-League and Shimizu S-Pulse dubbed the game the Thai Derby, after the "Japan Derby," a tag attached to competitions between AC Milan and Inter Milano when those Serie A teams had Japanese stars Keisuke Honda and Yuto Nagatomo playing for them.

The Thai Derby was played at IAI Stadium Nihondaira, the S-Pulse's home field in Shimizu, Shizuoka Prefecture. All players wore uniforms bearing their names in Thai. LED boards behind each goal also showed the players' names in Thai. TV viewers were encouraged to download an app with which they could send cheers for their favorite players through to the stadium's speaker system.

Shimizu won, 3-1, and while the Thai players were quiet the derby served as something of a J-League showcase in a region, Southeast Asia, that the soccer world considers a "vein of gold."

Southeast Asia has always been crazy for soccer, especially for the big European tournaments and the World Cup. But now, with many of its economies having enjoyed prolonged economic growth, it is not only producing players who can star overseas but markets where non-European leagues can sell broadcasting rights.

The J-League has been mining this vein for a decade now with what it calls its "Asian strategies." On the club level, Cerezo Osaka has concluded a tie-up with a Thai team, and Gamba Osaka has played preseason games in Indonesia. There have also been exchanges of young, lower-division players.

"What we have envisioned is starting to occur," said Kei Koyama, an international relations representative for the league. "The Asian market has a lot of room for growth." 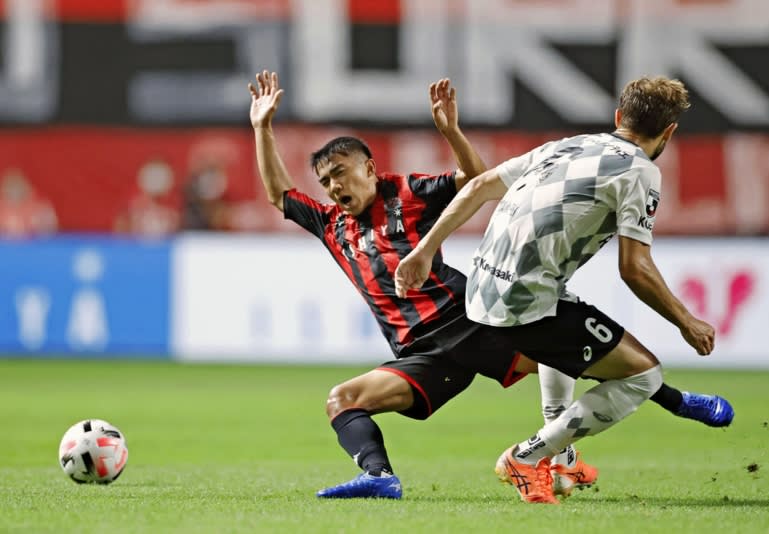 Thai national hero Chanathip Songkrasin has been with Consadole Sapporo since the 2017 season.   © Kyodo

The J-League has been especially successful in Thailand. Ahead of this season, it signed a deal with Siamsport after terminating a previous arrangement with a pay-TV operator. Now J-League games can be watched in Thailand over YouTube and social networks. In addition, a public TV channel broadcasts a J-League game of the week.

According to the J-League, an estimated 240,000 people in Thailand watched the Thai Derby live, the league's second-biggest audience this season.

Koyama said 300,000 people in Thailand watch J-League matches every week and that by the end of the year the league will have racked up 10 million views in the country.

Fees under the new three-year contract increased almost fivefold from the previous three-year deal, and the league's revenue from overseas broadcasting rights is estimated to come to 2.5 billion yen ($23.68 million) for the three years through 2022.

Soccer is the second most popular sport in Thailand, after badminton. Thais began recognizing the J-League years ago because of Japanese teams' strong performances in the annual Asian Champions League. The league gained more recognition in 2017, when Chanathip joined Sapporo.

In addition to Chanathip and Teerasil, three other Thais play in the J-League.

"There are more and more young Thai players wishing to play in the league," said Koyama, who often travels to the country.

The level of play is also on the rise now that the Thai national team is making strenuous efforts to help its players catch up with and surpass the skill level of their Japanese peers. When J-League coaches visited Thailand 10 years ago, they showed little interest in local players, Koyama said.

These days, however, the gap between Japan and Thailand is narrowing in terms of skill and mindset, and J-League coaches now see some players capable of performing in Japan.

Now Thailand and other Asian national teams might be about to get the same kind of boost that Japan received in 1998, the first year it qualified for the World Cup.

Football in Japan really began to take off after the men's team first made it to the World Cup, and since Japan co-hosted the event with South Korea four years later. South Korean soccer has also been progressing as the country rides a string of nine consecutive World Cup appearances going back to 1986.

FIFA, soccer's world governing body, is expected to allow 48 teams to qualify for the 2026 World Cup, to be played in Mexico, the U.S. and Canada, up from the current 32.

This would throw the door wide open to Southeast Asian nations, none of which have ever made it to the World Cup.

If an expanded World Cup does help soccer explode in Southeast Asia, the J-League has positioned itself to capture the expected wave of excitement.

Japan's top soccer league currently earns about 5% of its broadcasting revenue from abroad, and "we hope to raise the ratio to 10%," Koyama said.

But it has competition from Europe's top leagues, where the world's best players perform. Koyama said the English Premier League gets 50% of its broadcast revenue from overseas, mostly from Asia. The corresponding figure for Germany's Bundesliga is nearly 20%.

"Japan may be left behind if we stay idle," Koyama said.

In a Neilsen Company survey of popular interests in Thailand in 2019, 84% of respondents said they were interested in the Premier League and 62% in Spain's Liga Espanola. The J-League was at 49%.

The J-League is intent on increasing its mindshare in Thailand. It is also eager to gain fans in Vietnam and Indonesia.

"We want to create a second Thailand," Koyama said.

A lot of the J-League's current success in Thailand is due to Sapporo's signing of Chanathip and developing him into a core player. But while the league has also signed Vietnamese players, it has not been able to generate the same kind of buzz in the Southeast Asian nation as Chanathip's signing created in Thailand.

Le Cong Vihn was the first Vietnamese player to make it to the J-League, doing so back in 2013. Three years later, Nguyen Cong Phuong, like Vinh, also a member of the Vietnamese national team, joined Mito HollyHock, a second division J-League team.

Koyama said there is a problem with relying on players from a certain country to raise the league's profile in that county: Any newfound excitement dissipates as soon as the player goes elsewhere.

Effective marketing measures, he said, "differ from country to country."

Soccer clubs in Southeast Asia tend to focus on piling up wins in the present and on short-term earnings, Koyama said. To help with both priorities, they sign foreign players.

While this might help in the W column, it definitely helps the bottom line as teams can spend less on player development. But this is also the strategy's flaw; the quick fix neglects a team's talent pipeline.

Perhaps the J-League and its Southeast Asian counterparts can come together to beef up player development efforts.

"Nurturing players means costs from a short-term point of view," Koyama said, and now many Southeast Asian soccer clubs are showing an interest in how J-League teams do this, he added.

"Japan and Southeast Asian countries," Koyama went on, "have a lot in common culturally and in the way we think."

In that mutual understanding, the J-League sees opportunities.