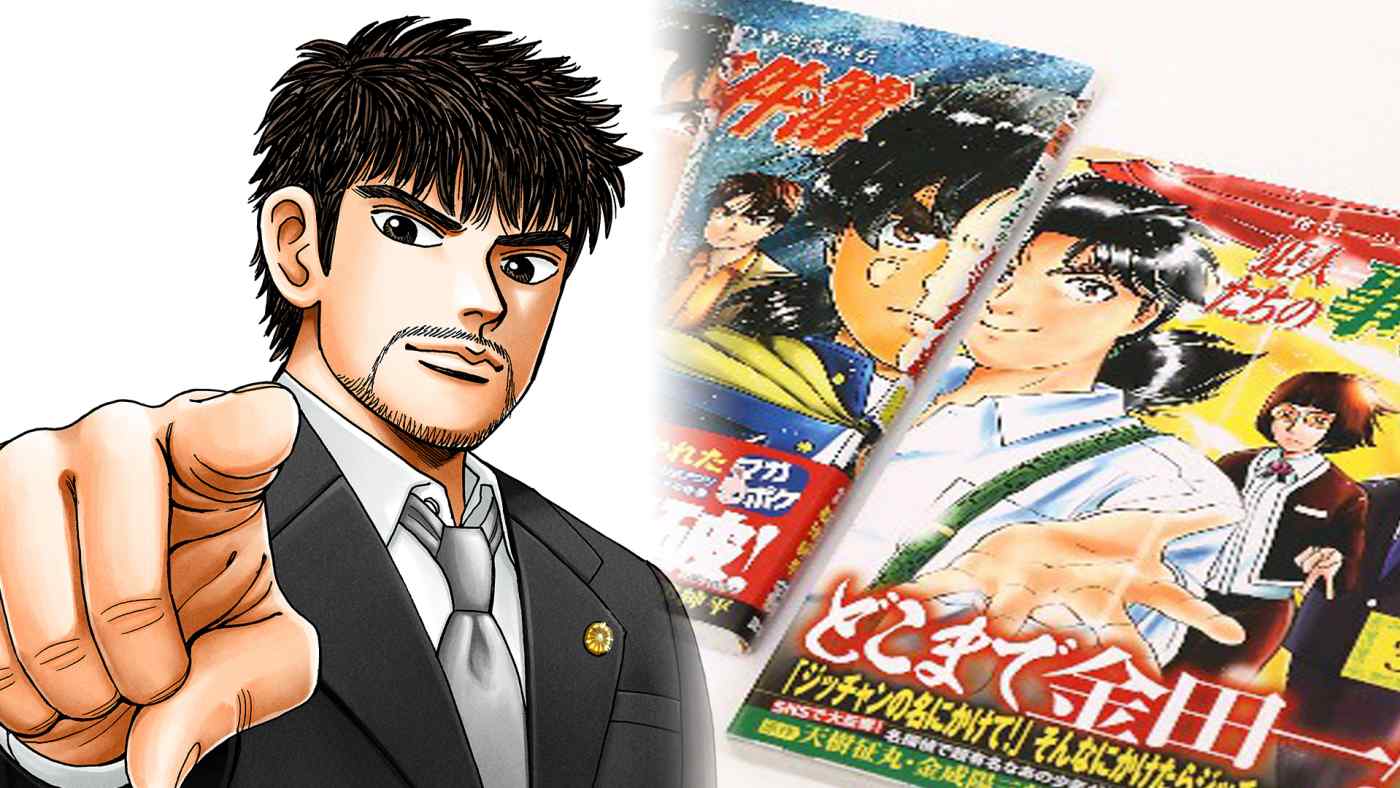 TOKYO -- Japanese manga needs a new superhero. Battered by a shrinking population and changing consumer tastes, the once undisputed champion of the country's pop culture is on the ropes as readership plummets.

The days of big moneymakers like "Dragon Ball" and "Captain Tsubasa" are fading into the past. Now, after more than two decades of steady decline, editors and artists are casting about for ways to win back fans to what has arguably been Japan's most successful cultural export.

One idea has been to put a new twist on old themes, as publisher Kodansha is doing with its hit manga mystery series, "The Kindaichi Case Files." The story depicts the adventures of high school student Hajime Kindaichi, who follows in the footsteps of his famous detective grandfather investigating complicated and mysterious crimes.

The series achieved enormous popularity with over 90 million copies sold, and has been translated into English and other languages. Not one to let a good thing slip away, Kodansha used the 25th anniversary of Kindaichi to launch a spinoff.

Titled "Unofficial Tales Behind The Kindaichi Case Files: The Criminals' Files" -- "Kindaichi Shonen no Jikenbo Gaiden: Hannin-tachi no Jikenbo" in the original Japanese -- the series revisits some of Kindaichi's old cases. This time, however, the stories are told through the eyes of the criminals in a hilariously riveting retell of some of the best episodes, with the culprits explaining how they bungled their crimes.

The spinoff has been a resounding success, having sold more than 1 million copies.

Tetsuya Fujikawa, 34-year-old editor of Weekly Shonen Magazine -- where the series first appeared -- conceived the spinoff as a way to lure back fans. Initially planned as a one-volume project, the overwhelmingly positive response has led to continuation of the stories.

Chosen to illustrate it was 30-year-old Shimpei Funatsu, who landed the job after his own manga series flopped. While Funatsu still hopes to create another original work, the artist says he is happy about his current role reviving the Kindaichi stories.

Some frown on wasting the talent of promising young manga artists for rehashing old themes. But Fujikawa is unfazed by critics. "Our role is to create entertaining manga content," the editor said. "When there is strong demand for works that can transcend generations, we would be negligent if we failed to leverage the brand's huge appeal."

Ryo Tomoda, editor at rival publisher Hakusensha, is involved in a similar spinoff. He defends the practice, noting that as sales of manga magazines have sagged over the years, it is now "ten times more" difficult to publish a new title than it used to be. "Manga editors appear eager to capitalize on the popularity of bestsellers," the 50-year-old editor said.

In 1994, Weekly Shonen Jump, published by Shueisha, recorded a weekly circulation of 6.53 million copies, a Guinness World Records' mark for a manga magazine. Although the weekly still offers hit titles such as the internationally acclaimed "One Piece," circulation has tumbled to around 1.7 million -- a fate shared by other manga magazines, some of which have gone out of business.

This is not to say manga is dying. According to Japan's Research Institute for Publications, sales of manga e-books were estimated at 171.1 billion yen ($1.57 billion) in 2017, surpassing those of printed publications at 166.6 billion yen for the first time. 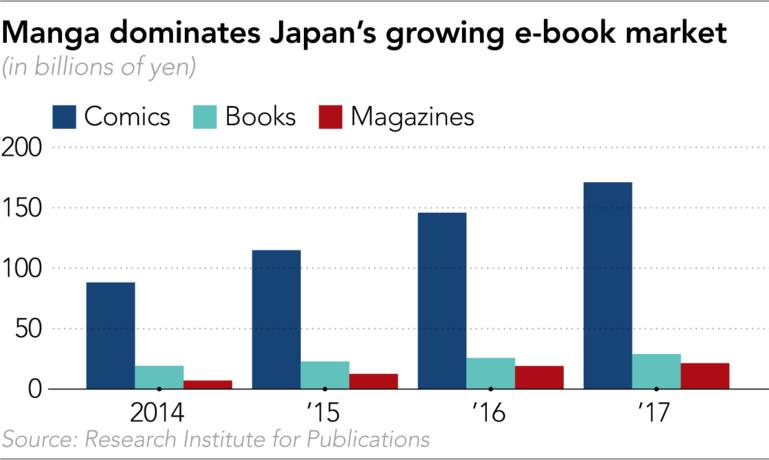 But while helping keep the genre alive, the trend toward online readership has eroded the power magazine editors wield over manga artists.

Takashi Yoshida, 39, creator of the hit manga "Could Have Done It Committee," is indicative of the changing dynamic. The comedy about lost love originated in the attic of his Tokyo home and took the internet by storm. In 2016, two years after its debut, a social media influencer raved about it in a tweet, drawing the attention of magazine publishers scouring the online manga scene for new hits. Yoshida received offers from five publishers, including some majors.

This is typically a sign that a manga artist has made it and can reap the benefits, such as a stable income. But Yoshida snubbed them all after they refused his demand to retain online publishing rights. As a result, his series was not printed at the time, despite its popularity. Later, he found a publisher who agreed to his conditions and printed his work.

Most manga contracts cede online publication rights to the publishers. Even when the artist retains rights, prior consent by the publisher must be received before the artist can publish online.

Yoshida wants none of this. He likes the immediacy of online publishing, which allows him to instantly gauge reader response and receive feedback directly from fans -- a benefit that would largely be lost were he contractually bound to a publisher.

"We are in an age when manga artists can take full control of how to publish their works," Yoshida says. "It is important for artists to think about how to devise and execute their own publication strategies."

His first online episode generated 700,000 page views, with the series as a whole garnering over 5 million views. Takashi Yoshida's "Could Have Done It Committee" demonstrates how creators are gaining more control over how their works are published.   © Takashi Yoshida

The changing face of the industry has forced manga artist Norifusa Mita, 61, to rethink his workflow. Best known for "Dragon Zakura" about a lawyer who helps underperforming high school students, Mita has adopted a unique approach to production of the sequel, "Dragon Zakura 2."

Mita first roughs out sketches of the characters and backgrounds, then creates a draft of the dialogue. After that, he outsources work on the body of each episode to a production company. Artists at the company are directed by Mita, who corrects their illustrations before the company finishes up production.

Mita cites the manufacturing industry as the inspiration to his approach. "I have introduced [manufacturing methods] into manga production," he said, noting Apple's production system.

Mita first tried this formula for his "Investor-Z" series, launched in 2013 in Morning, a weekly manga magazine for young adults published by Kodansha.

When asked by the publisher to start a new series, he was already involved in another project. Unsure of his ability to manage two jobs at once because of his age, Mita asked the editors for advice. They suggested collaborating with a production company.

Before starting, Mita trained the employees on how he wanted the illustrations drawn and thrashed out details with them about the production process.

Despite the careful preparation, there were teething troubles, forcing Mita to redraw many illustrations. But eventually his team caught on, and after four years they could be trusted to both flesh out Mita's characters and draw them on their own.

Convinced of the workability of the system, Mita fully adopted it in 2018 for "Dragon Zakura 2."

With much of his work on the sequel being outsourced, Mita's own assistants are concentrating on another project, "The Great War of Archimedes." The new manga requires highly detailed illustrations of warships and weapons.

"I doubt if manga artists can stick to old-fashioned production methods 10 or 20 years down the road," Mita says. "If they do, the industry will cease developing," he warns.

According to a report on digital content by the Digital Content Association of Japan, domestic sales of manga -- including e-books -- amounted to 433 billion yen in 2017, a fraction of the entire content market, which racked up 12.48 trillion yen in sales.

But the overall manga ecosystem -- including spinoff movies, dramas and merchandise -- is much larger, with sales estimated at over 3 trillion yen, a promising sign for a struggling industry.