TOKYO/SEOUL -- Businesses in Japan and South Korea are on alert as tensions flared again this week between Tokyo and Seoul over the legacy of Japanese colonialism and recent naval run-ins.

While many businesses have yet to see an impact on sales or profits from months of building tensions, several told the Nikkei Asian Review they would be concerned if the tensions continued unchecked.

At stake are major flows of trade, investment and tourists. Japan and South Korea are each other's second-largest source of foreign tourists and third-largest trading partner. Tourism and consumer services are most at risk from any major standoff, but other industries, such as semiconductors, could potentially be vulnerable to supply chain disruptions.

"The business community does not want an escalation, but politicians are becoming more hard-line," said Hidehiko Mukoyama, an analyst at the Japan Research Institute in Tokyo. Some Japanese politicians are urging the government to punish South Korea with measures such as higher tariffs and visa restrictions. The animosity could breed incidents of harassment or assault, harming business activity, Mukoyama said.

Consumer-facing businesses such as restaurant chains were likely to reconsider or delay their expansion plans in light of the uncertainty, he said.

The two countries have adopted a two-track approach so far, keeping historical and colonial issues separate from business and security cooperation. But there are signs on both sides of a hardening stance that could jeopardize this careful balance, say experts. The latest strain on the relationship came when South Korean lawmaker Moon Hee Sang said in an interview with Bloomberg that Emperor Akihito should personally apologize for his country's colonial rule of the peninsula. Tokyo lodged a complaint with Seoul earlier this week demanding an apology.

In an opinion poll conducted by Nikkei last month, 62% of Japanese respondents said they want to see a tougher response to South Korea.

The sensitive historical issues were reopened last October when the South Korean Supreme Court ordered Nippon Steel & Sumitomo Metal to pay reparations to Koreans who were forced to work in Japan during the period of Japanese colonial rule. This was a reversal of a long-standing diplomatic understanding that reparations issues were settled in a 1965 accord establishing diplomatic relations between the two countries.

The neighbors have also clashed over Seoul's decision to disband a fund for wartime "comfort women," which Japanese Prime Minister Shinzo Abe and former South Korean President Park Geun-hye set up in 2016. More recently, the two have clashed over military maneuvers in the waters between the two countries.

Business has been stung by tensions before. In 2012, a visit by South Korean President Lee Myung-bak to islands claimed by both countries dampened a Korean pop culture boom that was sweeping Japan at the time.

Between 2012 and 2015, the number of Japanese visitors to South Korea fell by almost half, necessitating a financial-assistance program for some South Korean travel agencies.

Most industrial companies were relatively unscathed last time round and hope to avoid the worst again. Yet they are still keeping a close eye on the situation. 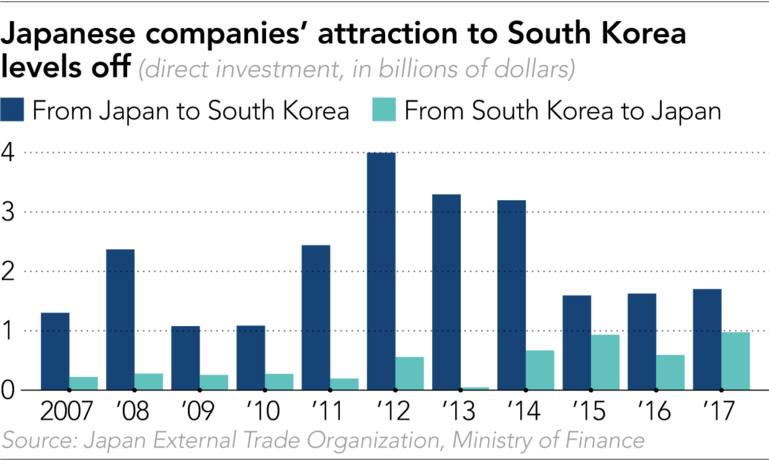 Toray Industries, a synthetic fiber maker and the largest Japanese investor in South Korea, said that while the diplomatic row had not yet affected its business there, it was concerned that a prolonged spat could make it more difficult to attract talent in the country. South Korea accounts for about 12% of Toray's overall sales. For now, plans to invest 350 billion won ($310 million) in a factory to make film for lithium-ion batteries were still on track, it said.

LG Display, a supplier of TV panels to Sony and other Japanese brands, warned that if the dispute "lingers for a long period" it could see disruption, although so far there had been no sign of any impact.

South Korea's Asiana Airlines said that while it had not seen a big change in the number of passengers bound for Japan, "It may take time for such disputes to be reflected in the business."

Consumer brands and restaurants are more exposed to shifts in the public mood, as are travel-related companies, but they too say it may be too early to see significant fallout from the political tensions.

At E-Hotel Higashi Shinjuku, located near Tokyo's largest Koreatown, general manager Naoyuki Hirano said there had been a slight decline in the number of South Korean tourists but this did not appear to be related to the tensions.

South Korean visitors to Japan tended to be young. "They come to Japan to experience the latest fashion in Tokyo and Osaka," Hirano said. The only worry, he added, would be if Seoul took measures similar to those China has been known employ when angered. Beijing banned group tours to South Korea in 2017 after Seoul agreed to deploy a U.S. antimissile system on its soil.

Fast Retailing, operator of the Uniqlo casualwear chain, blamed the drop in same-store sales in South Korea during the September to November quarter on warmer-than-usual temperatures and slower sales of winter apparel rather than the tensions.

However, while Ichibanya said it wanted to have more outlets, it stressed that opening plans were regularly reviewed.

Consumer facing companies may be outwardly sanguine, but Mukoyama of the Japan Research Institute said these businesses were likely to reconsider or delay their expansion plans if the tensions continued.

For Nippon Steel, which is facing lawsuits in South Korea over forced labor in Japan during World War II, the issue is more immediate. The company shares Tokyo's view that the issue was settled by the 1965 accord and cannot be reopened unilaterally by South Korean courts.

Still, Nippon Steel is wary of worsening bilateral ties. It is a supplier to South Korean automakers, shipbuilders and construction companies, and it runs a joint venture with steelmaker Posco to recycle steel dust.

"We hope that the two countries will resolve the issue in an appropriate manner so that the bilateral relations won't deteriorate further," a Nippon Steel representative said.