BANGKOK -- Thailand's celebrated tourism industry is being rocked by an unprecedented number of business closures and job losses as it suffers through the country's second wave of COVID-19 infections and pleads with the government for aid.

At least 1 million workers in the country's hospitality sector have been laid off so far, according to the Thai Hotels Association, as lodging and other service operators suffer from the vanishing act pulled by tens of millions of foreign tourists.

Tourism in 2019 contributed about 20% of Thailand's gross domestic product. The sector is so large that it creates a multiplier effect across the economy. At least it used to. Now all of the industry's job losses and closures could hinder a recovery in Southeast Asia's second-largest economy.

When the first wave of infections began hitting the country hard last March, Thailand's government responded by restricting people's movements and closing its borders to foreign arrivals. The constraints on residents were gradually eased beginning in May, and in the months that followed, the government also encouraged Thais to indulge in their country's world-renowned tourist havens.

These efforts, however, could not pull the industry out of the severe financial plight it fell into once foreign tourists and their spending power disappeared. The number of foreigners visiting Thailand in 2020 fell to 6.7 million, down 83% from the previous year, according to data released by Thailand's Ministry of Tourism and Sports.

Thai hotels, which catered to nearly 40 million foreign tourists in 2019, are now staring at a possible second straight year with only a trickle of these big spenders. Krungthai Compass, a Krung Thai Bank think tank, says that the second wave will have longer-than-expected repercussions. The government is expected to need a few months to bring the virus's spread under control; this will do another 100 billion baht ($3.3 billion) worth of damage to the already hobbled tourism sector, the think tank says.

Several hundred hotels in major tourist destinations have already closed, with many up for sale. Other businesses that rely on the tourist hordes have been forced into bankruptcy as the second wave further decimates their finances.

Thailand had been considered a COVID success story, having completely halted the virus's spread. But in December a cluster exploded at a seafood center in the central province of Samut Sakhon. Transmissions then raced across the country, forcing the government to declare 28 provinces "red zones," where crossing provincial borders is banned.

The consequences have been devastating.

In Krabi, a southern beach resort with about 900 hotels, "some 450 have been temporarily closed," Ekkawit Pinyothammanothai, president of the Krabi Tourism Council, told Nikkei Asia. Dozens of the dormant hotels have been put up for sale as their owners are unable to endure a second liquidity crunch in less than a year, Ekkawit said.

Hoteliers on Koh Samui, a Gulf of Thailand resort island known for its palm tree-lined beaches and mountainous rainforest, find themselves squeezed by the same vice. Up to 100 have been put up for sale, according to Vorasit Pongkumpunt, president of the Tourism Association of Koh Samui.

"Normally, there are thousands of tourists walking along the streets and beaches of Koh Samui," Vorasit said. "But they have vanished, and 70% to 80% of shops and bars are closed as there are no tourists." 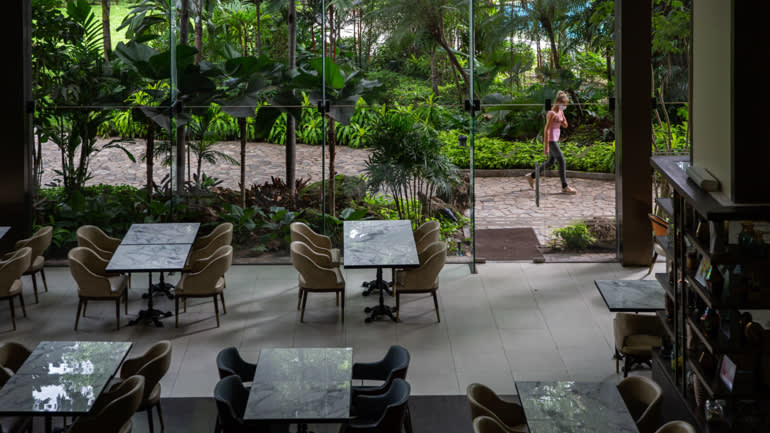 The decrease in guests has forced many hotels in Thailand to temporarily close or go out of business. (Photo by Lauren DeCicca)

In the west coast beach town of Hua Hin, where the Thai royal family has a summer residence, "the hotel occupancy rate has dropped into the single digits, and all shops, bars and spas are closed," said Wassana Srikanchana, president of Hua Hin Tourism Business Association. "Even supermarkets are empty."

The Central Group retail conglomerate on Monday will temporarily close its department store in Patong, a boisterous beach town on the Andaman Sea island of Phuket, due to the lack of tourists. Pre-COVID, foreign tourists made up 85% of the emporium's customer base.

Thailand took in around 3 trillion baht in tourism revenue in 2019. Two-thirds of that came from foreign tourists. The industry's heavy reliance on foreigners wishing for a winter escape has made the industry's predicament all the more painful.

Around 400 to 500 outbound travel agencies have closed as there are virtually no commercial flights. About 50 have gone bankrupt, Sutthipong Puenpipob president of the Thai Travel Agents Association told Nikkei.

There used to be 850 of these travel agencies. Those that remain open now arrange domestic vacations, often offering premium tours for wealthy Thais that feature high-end transportation, leading restaurants, luxury hotels and more. However, "offering premium domestic tours is not easy now that spending power is not very strong and COVID is still eroding the country's economy," Sutthipong said.

The Thai Hotels Association recently submitted a proposal to the government asking for survival assistance, including a debt moratorium and soft loans. The association also asked the government to subsidize 50% of employee wages to prevent further layoffs.

"At this stage," THA President Marisa Sukosol Nunbhakdi said on the association's website, "we desperately need government help in a bid to survive as the situation is lasting longer than expected."