With cash payments declining, banks are having to quickly rethink their business models to survive. Cashless technologies like cryptocurrencies and QR codes are radically changing the competitive dynamics of the financial services industry and raising new challenges for regulators.

The total number of ATMs around the world fell for the first time in 2018, slipping 1% to about 3.24 million units at the end of the year, according to Retail Banking Research, a British research company specializing in banking technology, cards and payments.

"In China, the swift adoption of noncash payments has contributed to a similarly rapid fall in ATM installations," RBR said. Smartphone payment services that use QR code technology have spread rapidly in the world's second-largest economy, leading Chinese, especially young people, to carry less cash. These cashless consumers hardly handle paper money or coins, and seldom if ever visit banks or use ATMs.

In the U.S. "branch closures have led to fewer bank ATMs," according to RBR. In India, the No. 3 ATM market, "growth slowed considerably," the company said.

In cash-loving Japan, which ranks fourth, the number of machines slipped 0.2% to 202,300. This indicates a major shift -- ATMs became ubiquitous in Japan over the last two decades as machines were installed in convenience stores. But the number of ATMs is falling even in Japan.

On July 5, MUFG Bank and Sumitomo Mitsui Banking announced they will make their ATMs outside their branches available to each other's customers, starting in September. The move will allow the two to close a total of 600 to 700 ATM locations. With the cost of operating ATMs weighing heavily on banks' bottom lines more such moves are likely in the future. Many banks are also closing branches. The total number of branches in the in the 36-member Organization for Economic Cooperation and Development, a grouping of developed economies, fell 2.8% in 2017 to 268,900, according to data from the International Monetary Fund. Figures exclude the U.K., for which data was unavailable.

The trend continued into 2018; the figure for 30 OECD countries that have already published data fell 2.6% from the previous year.

Customers are increasingly banking online, reducing the need for physical locations. JPMorgan Chase, a U.S. bank, operated 5,028 branches at the end of March 2019, down 11% from five years earlier. On the other hand, subscribers to its mobile banking services surged 110% over the same period. 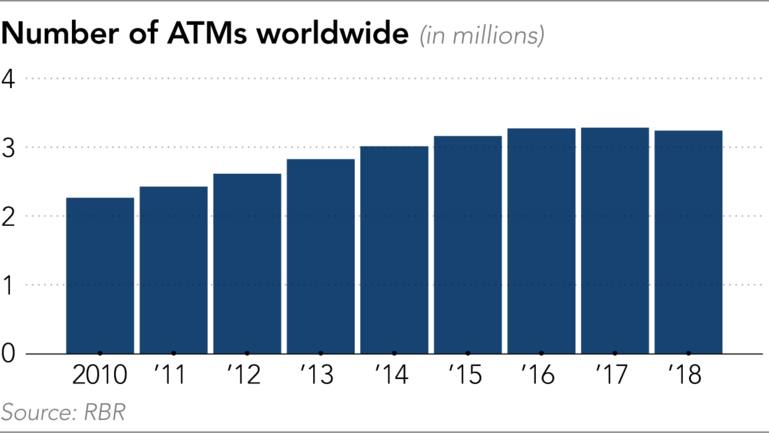 Driving the decline in brick-and-mortar financial services is the fall in cash transactions and growing use of cashless payments, including credit cards, contactless payments, cryptocurrencies and fintech-based services.

While there are still 1.7 billion people worldwide without bank accounts, two-thirds of those people have mobile phones that can access online financial services, according to the World Bank. Low-cost crypto remittance services that do not involve banks have also emerged.

In June, Facebook announced a plan to launch its own digital currency, called Libra. The world's largest social media company, with 2.7 billion users worldwide, has pledged to work with regulators to create a system that protects users' data and ensures the stability of the cryptocurrency. If Libra takes off, many people could use it, even if they do not have bank accounts.

The evolution of cryptocurrencies and digital banking services through mobile technology could help foster financial inclusion, helping make financial services available at low cost, even to people and businesses that have little or no contact with traditional banks.

The Bank for International Settlements, however, warns that the development of cryptocurrencies and other new financial technologies present risks for the poor. The lack of access to conventional payment systems "could push people into using unregulated and potentially unsafe shadow payments," the financial institution says.

While fintech is making financial services more efficient and accessible to more people, its rise is creating new regulatory challenges, stamping out the use of new technologies for illegal transactions and money laundering.