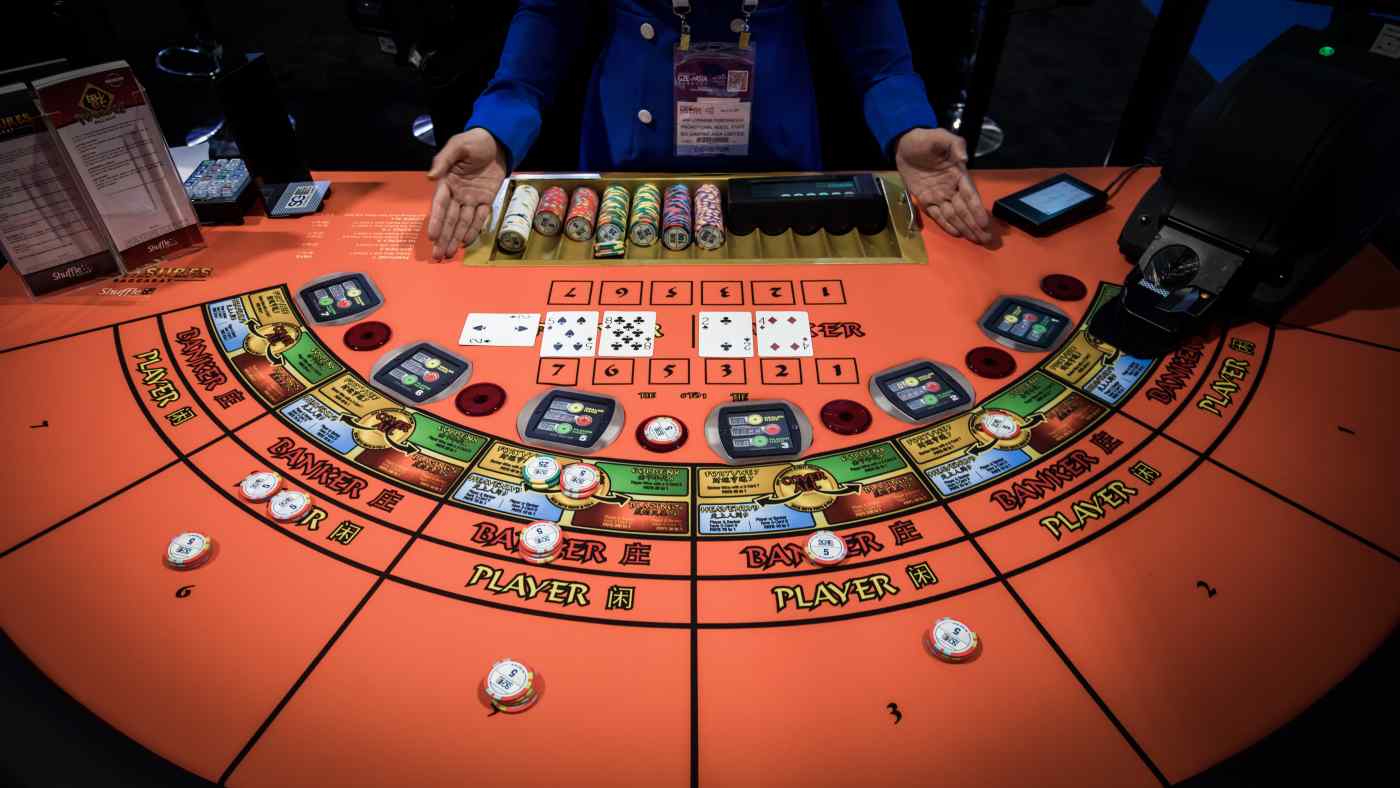 MANILA/HONG KONG -- For the last two months, Manila's Entertainment City -- where Las Vegas razzmatazz meets the coquettish glitz of the Philippines -- has had all the showiness of a ghost town.

Shut since mid-March to prevent the spread of the novel coronavirus, the roads surrounding Manila's four integrated casino resorts -- Bloomberry's Solaire, City of Dreams, Okada and Resorts World -- are empty.

Steel barricades have replaced the inviting smiles of the greeters. Even the bomb-sniffer dogs appear lethargic and forlorn.

"As everybody else, they are losing money," gaming industry champion Andrea Domingo, who heads the Philippine Amusement and Gaming Corp. told the Nikkei Asian Review.

The virus, which has hit tourism across the region hard, has hammered the gambling industry from Manila to Macao, with cashflows running dry as casinos have been forced to shut.

Even in Macao, where the pause lasted just 15 days, and now in South Korea, Vietnam and New Zealand, where some casinos have started to reopen, traffic is likely to remain subdued as gamblers remain hesitant about mingling in crowds and governments maintain strict border controls and quarantine measures.

"Although we expect recovery in 2021, we think it is likely to remain lower than in 2019 as we anticipate the economic implication from the pandemic may drag on," Fitch analyst Erlin Salim told Nikkei, adding that she expect casinos to be hardest hit in the second quarter this year.

Australia-listed Silver Heritage Group, which entered voluntary administration after it was forced to close its casinos in Nepal due to the pandemic, could be the first of many to struggle to survive. Hong Kong-listed Imperial Pacific International last week similarly warned its sole casino, on the Pacific island of Saipan, would have to go out of business too, according to local media, if the company is forced to pay a $5.6 million court judgment to a disgruntled contractor. Women wearing masks leave the casino at Resorts World Sentosa in Singapore on March 4 amid the coronavirus pandemic.    © Reuters

For the first 24 days of May, Macao's daily casino revenue came in at 96% below last year's levels, according to analysts at Bernstein Research, who currently project a full-year decline of 44%.

Most Macao operators have cut or suspended dividend payments to shareholders and the majority of those reporting net results for the first quarter fell into the red.

"For us, when you break it down short-term, midterm, long-term, I would say short-term continues to be Armageddon, midterm is grim [and] long-term is great [but] it really depends on when the borders start opening up," Lawrence Ho, chairman and chief executive of Melco Resorts & Entertainment, told analysts on an earnings call for the company, which operates casinos in Macao, Manila and Cyprus.

Most Macao operators have cut or suspended dividend payments to shareholders and the majority of those reporting net results for the first quarter fell into the red.

SJM Holdings, for example, reported a net loss of 409 million Hong Kong dollars ($52.7 million) for the first quarter, reversing a HK$850 million profit a year earlier, while Wynn Macau reported a loss $154.2 million, down from a profit of $190.6 million.

Still, even as takings dry up, Macao's casinos have managed to service their payroll commitments and are sticking with planned construction projects on the basis that they have enough cash to tide them over for more than a year.

The Las Vegas Sands, which is controlled by U.S. billionaire Sheldon Adelson and owns Singapore's Marina Bay Sands, plans to proceed with the June opening of its Grand Suites Tower at the Macao Four Seasons, while Hong Kong-based Melco Resorts is aiming to finish renovations and reopen the showcase Nuwa hotel at its City of Dreams Macau resort in September.

"Now is not the time to pause or slow down investment in Macao," Adelson, Sands chairman and chief executive told analysts while reviewing a $2.2 billion construction program in the city last month.

"We see the opportunity and possess both the financial strength and the strategic commitment to make additional investments," he said.

Macao junket operator Suncity Group early this month sealed its partnership with local conglomerate Alliance Global Group for a casino inside the $1.1 billion West Side City Resorts World. Set to open in 2023, it will be Manila's fifth integrated resort.

Together Macao's six casino operators, the city's biggest employers, have little choice but to retain staff as local authorities prepare to begin the process of issuing new gaming concessions to replace existing ones about to expire. Officials have publicly insisted on the preservation of jobs and are keen for development to continue. By remaining at full strength, Macao's casinos are well placed for when travel restrictions start to loosen. Many analysts expect announcements about a resumption in visitor flows from mainland China within a week or two.

"Near term, we believe Macao will have an edge over other gaming jurisdictions in drawing mainland Chinese gaming patrons, thus creating a monopoly-like environment over the next 6-9 months," said Daiwa Capital Markets analyst Andrew Chung in a recent report.

The city has a number of other advantages too. Chinese travelers usually reach the city by land or sea rather than air, unlike other major Asian casino markets, which is important with many avoiding plane travel amid the pandemic.

Macao has reported no new COVID-19 infections since early April and, like Hong Kong, has a special arrangement with China whereby residents of specific mainland cities can normally travel freely to the city.

This mechanism will allow for a controlled opening up of travel from areas where the pandemic has ended first.

Speaking to analysts, Ian Coughlan, president of Wynn Resorts' local unit, pointed to "absolutely packed" conditions at the sprawling Chimelong International Ocean Resort just across the border from Macao during China's May 1-5 holiday.

"We have seen evidence of pent-up demand like crazy from our customers... and we talk to them pretty regularly," said Las Vegas Sands president Robert Goldstein. "I think by late summer, early fall we are going to see some nice profitability out of our Asia properties."

Casino executives generally expect high roller business to come back first before the mass market. This could benefit operators like Melco and Wynn which focus more on the high end -- and also reduce complications from social distancing regulations.

David Sisk, Melco's chief operating officer, told analysts the company in normal times would have no more than two gamblers seated at a table, as premium players "like to kind of play with some distance between each other... The fact that we are spread out more shouldn't really impact us that badly." The Casino Lisboa in Macau is visible on Feb. 4 before its temporary closing due to the coronavirus pandemic.   © Reuters

South Korean casino resort operator Kangwon Land also opened its doors to high rollers when it reopened on May 8, but the company pushed back the opening date for general guests by an additional week to May 28 amid rising worries in Seoul over a second coronavirus wave due to cluster infections in Seoul nightclubs.

Kangwon said that about 30 VIP guests are currently visiting the venue per day, far lower than the 8,000 before the pandemic, with business not expected to recover to last year's levels anytime soon.

"We had shut it down for almost three months," said Choi Hye-ran, a spokesperson for Kangwon. "I don't think we could recover to the level of last year. We expect some recovery in the resort business, but not the casino."

Back in Manila, casino companies are preparing to test employees for coronavirus and are hoping to reopen next month, according to employees interviewed by Nikkei.

They are, however, bracing for the possibility of reduced work shifts once operations resume.

"That would also mean reduced salaries," said one who declined to be identified because speaking to media could imperil his job.