Its hand-carved lasts were loved by athletes and Amuro fans TOKYO -- Fukui Kutsukigata Seisakusho sits on a quiet residential street in northern Tokyo. The smell of oil permeates the production facilities on the first floor of the white-tiled building, where machines carve wooden molds for men's shoes to fill the company's final few orders.

After surviving the firebombing of the capital and shaping footwear for the likes of pro golfers Ryo Ishikawa and Keiichiro Fukabori, the company, led by 88-year-old President Toshimi Fukui, is shutting down after more than a century.

Fukui Kutsukigata makes wooden shoe lasts -- foot-shaped molds that shoemakers use to craft leather footwear. It churned out 100,000 a year in its heyday but has seen much of its business go to foreign manufacturers that use 3D printing to achieve similar levels of precision at a lower cost.

According to Fukui, the company was established in 1917 by predecessor Chibasuke Fukui. With Western-style clothing -- including leather shoes -- starting to come into fashion, shoe lasts were in high demand.

The original factory in Tokyo's Asakusa district was destroyed during the bombing of the city in March 1945, but the company found a new home in Adachi Ward to the north. Women wearing pumps became a more common sight on Japanese streets during the postwar economic boom, ensuring steady business for last makers. 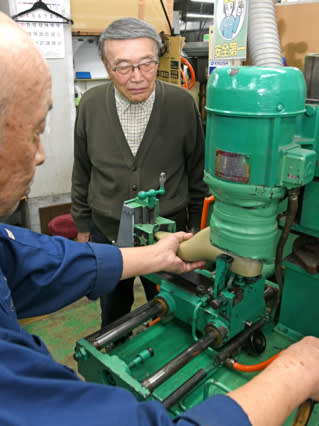 A worker carves a last with a machine as President Toshimi Fukui looks on. (Photo by Yoichi Iwata)

Fukui Kutsukigata hit its peak in the mid-1990s, when thick-soled women's boots inspired by the style of pop star Namie Amuro were flying off the shelves. Shoemakers racing to come out with more varieties needed large quantities of lasts. The company's annual turnover hit 500 million yen ($4.57 million at current rates).

While lasts are now made mainly from plastic, original master molds are still carved from wood by trained artisans. Years of practice are needed to shape lasts precisely to the buyer's specifications, from the height of the instep to the shape of the toe.

When Fukui took over the company in 1980, he focused on training such craftspeople, seeing technical skill as the key to success.

His efforts paid off. Manufacturers sought lasts from Fukui Kutsukigata to make shoes for top athletes.

Fukui himself would go out to clients to take their measurements and meet their requests with millimeter precision.

But the shoe industry has changed in recent years, to the detriment of traditional crafters.

An influx of cheaper foreign products from abroad put many local shoemakers and wholesalers out of business. As consumers' tastes grew more diverse, big orders became rarer. And with 3D printing -- which can produce highly accurate lasts -- coming into broader use, Fukui Kutsukigata faces competition from countries with lower labor costs.

A turning point for Fukui came a few years ago when his grandchild expressed a desire to leave the struggling company. Though Fukui hesitated at first to shut down a century-old institution, he saw no signs that conditions were likely to improve.

"If I sell the real estate now, I can pay off my debts," the master shoe mold maker told Nikkei. "This may be the right time for me to close shop."

He has found a buyer for the property and expects housing to be built on the site.

"I'll miss it, but times are changing," Fukui said.