Visitors stand in front of a screen showing President Xi Jinping at an exhibition marking the 40th anniversary of China's reform and opening up at the National Museum of China in Beijing on Nov. 14.    © Reuters

TOKYO -- China and India will have to show greater commitment to reform if they are to spur foreign investment, despite recently jumping up the rankings in the World Bank's ease of doing business survey, according to fund managers and analysts.

The World Bank found in its annual ease of doing business ranking, which looks at investment conditions including the burden of red tape and regulations in 190 economies, that China and India were among the top 10 countries that had improved the most, with 13 reforms combined.

Along with cross-border trade, both China and India made substantial reforms in areas like acquiring construction permits, obtaining electric power, paying taxes and starting a business. Proactive measures are being carried out by the two nations amid drastic changes surrounding their economies and business environments.

China, with seven reforms in areas such as trading across borders and getting electricity, advanced 32 spots to 46th place in the 2019 report, which uses data current as of May 2018. The country had only two reforms the previous year. It entered the top 50 for the first time and was also the only economy from East Asia and the Pacific to join this year's top 10 countries with the most improvement in the ease of doing business score, which serves as the basis for the rankings.

The country implemented a "single-window" system that links agencies involved in export and import, such as customs and tax administration, port authorities, and the Ministry of Commerce. Also, utility distribution in Beijing as well as Shanghai worked toward reducing the time needed to obtain new electricity connection. 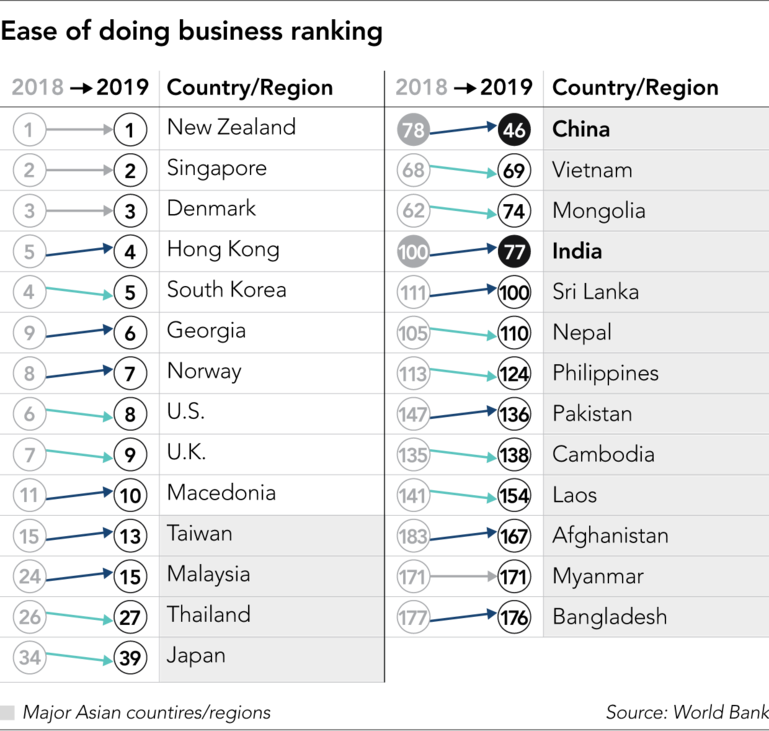 Under the administration of U.S. President Donald Trump, China has been accused of intellectual property theft, as well as being criticized for its strict and unfavorable regulations against foreign companies. The trade war that has been waged this year between Washington and Beijing nonetheless pressured the Asian nation to make some changes.

However, some doubts remain about the outlook for business within China.

A fund manager at a Japanese investment firm voiced his concern, saying, "the implementation of business reforms in China might not have been to this extent, if not for global pressure from countries like the U.S." From now on, it will be important for China to show its eagerness to better its business environment without others nudging it, to convince foreign businesses and investors of its positive changes.

Yusuke Miura, senior economist at Mizuho Research Institute, says "reforms in China are steady but there are still uncertainties over governance." "Even if foreign companies are able to start businesses, there have been times where rules suddenly change, in areas like overseas remittance," he added.

The Asian Corporate Governance Association (ACGA), which is a private organization with over 100 members including global institutional investors who are active in Asia, released a report covering Asian economies and their governance earlier this month.

In the 2018 CG Watch, China ranked 10th out of the 12 Asia-Pacific economies in terms of transparency and accountability, with low marks in categories like government and public governance. The report stated that "the formalization of the role of Party Committees, and their incorporation in state-owned enterprises (SOE) articles of association, creates new challenges and questions. SOE reform gains some momentum, but it is not entirely clear whether 'mixed ownership' will make a significant difference to corporate governance."

India advanced 23 spots to 77th with six major reforms, becoming South Asia's top ranked economy. Most notable were its initiatives to decrease border and documentary compliance time for both exports and imports under its National Trade Facilitation Action Plan 2017-2020, which enhanced cross-border trade efficiency. The time required for border compliance regarding imports improved to under 100 hours. Last year the figure was over 250 hours.

Under Prime Minister Narendra Modi, the launch of the Goods and Services Tax, as well as the overhaul of its foreign ownership rules, have made the economy more open and potentially more attractive to foreign investors.

However India has come under fire in Indian media over the manner in which it sought to move up the World Bank rankings, with critics suggesting it has prioritized minor institutional and procedural tweaks rather than fundamental reforms.

Kota Hirayama, senior emerging markets economist at SMBC Nikko Securities in Tokyo, noted the lack of major reforms by Modi in recent months. With the prime minister focused on his run for a second term next year, "he has been centered more on reforms that are for the people and not for businesses or investors. Direct investments and business advances have turned dull recently as a result," Hirayama said. "It seems like whether there is an upswing in business reforms during Modi's anticipated second term will influence India's long term business environment," he added.

This summer, one Japanese retail investor withdrew capital from an Indian equity fund he had been investing in since the beginning of 2017. "Other retail investors I talked to showed concern about further growth. It seemed as if India had lost its momentum in drastic reforms, so I decided to sell," he said.

Aside from China and India, other countries that showed the most improvement included Afghanistan, Djibouti, Azerbaijan, Togo, Kenya, Ivory Coast, Turkey and Rwanda. Together, the 10 countries implemented over 60 reforms, especially in areas such as starting a business, getting credit and paying taxes.

Rita Ramalho, senior manager at the World Bank's global indicators group, which produced the report, said in a statement that "this year's results clearly demonstrate government commitment in many economies, large and small, to nurture entrepreneurship and private enterprise. If the reform agendas are complemented with training programs for public officials, the impact of reforms will be further enhanced, new data show."