BEIJING -- Chinese new-car sales are on track to decline in 2018 in what would be the first drop on a full-year basis since 1990, in a further indication of a slowing economy.

The number of new vehicles sold in October fell 11.7% on the year to 2.38 million units, the fourth straight month of contraction, according to data released Friday by the China Association of Automobile Manufacturers. Year-to-date growth turned negative, with January-October sales down 0.1% to 22.87 million vehicles.

The trade war with the U.S. has cast a shadow over China's stock market, discouraging consumers from making big-ticket purchases such as cars. Consumer confidence has been further sapped by the struggles of China's private-sector companies, which have seen fewer orders amid the trade war, and have been cash-strapped under the government's deleveraging push.

Automotive sales, along with electricity production, are considered to be a more accurate yardstick of China's economic health, compared with gross domestic product, which many analysts say can be subject to political interference.

"The odds of positive growth for the full year are very low," a senior official at the government-backed auto industry group told reporters.

The first full-year drop in auto sales in 28 years could force a strategic rethink among automakers that have turned to China, the world's largest market, for growth as demand slows in mature developed markets. "But with China's auto market now 1.7 times larger than the U.S., not being in China is not an option," said one auto analyst.

"China is a critical market for all global automakers, especially General Motors, Ford and the German three [Volkswagen, Daimler and BMW]," said David Whiston, an equity strategist at Morningstar. "The slowdown will hurt profits for most of them, but it also means they must pay more attention to their costs and inventory levels to manage through a downturn." Last month's double-digit drop in auto sales, coming on the heels of a similarly large fall in September, owes partly to particularly strong sales in late 2017. The government scrapped a tax break on small cars at the end of the year, spurring a rush to get purchases in before then and a drop-off in demand thereafter.

But an executive at an automaker estimates that this reduces sales by about 200,000 to 300,000 vehicles a month. The decline in October was larger than that, which suggests that weaker consumer confidence also played a role. The Shanghai Composite Index is down more than 20% from the start of the year -- bad news for the country's estimated 140-million-plus retail investors.

The performance of individual automakers varied widely. Toyota Motor enjoyed a 20% jump in sales in October thanks to a tariff cut, and Honda Motor's sales grew as well. But the main joint ventures of General Motors and Volkswagen, the two market leaders in China, each suffered year-on-year declines. 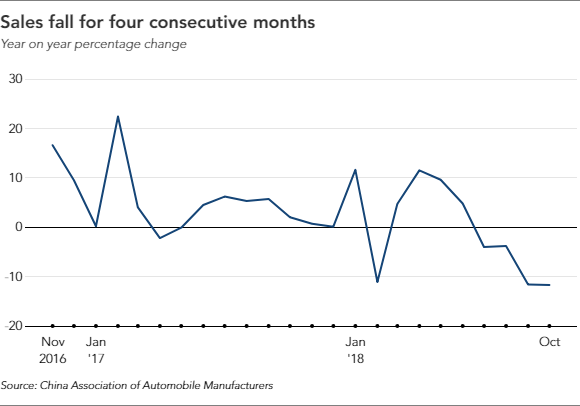 Shrinking sales in the largest auto market could spell trouble for a global market already stumbling elsewhere. While U.S. sales are expected to remain on a par with 2017, significant expansion looks unlikely. And the U.K.'s exit from the European Union could prompt the return of tariffs, dragging down demand there. Even such bright spots as Southeast Asia and India are dimming.

And with the trade war and U.S. President Donald Trump's threats of additional auto duties further clouding the industry outlook, automakers will need to reconsider where to focus their efforts.