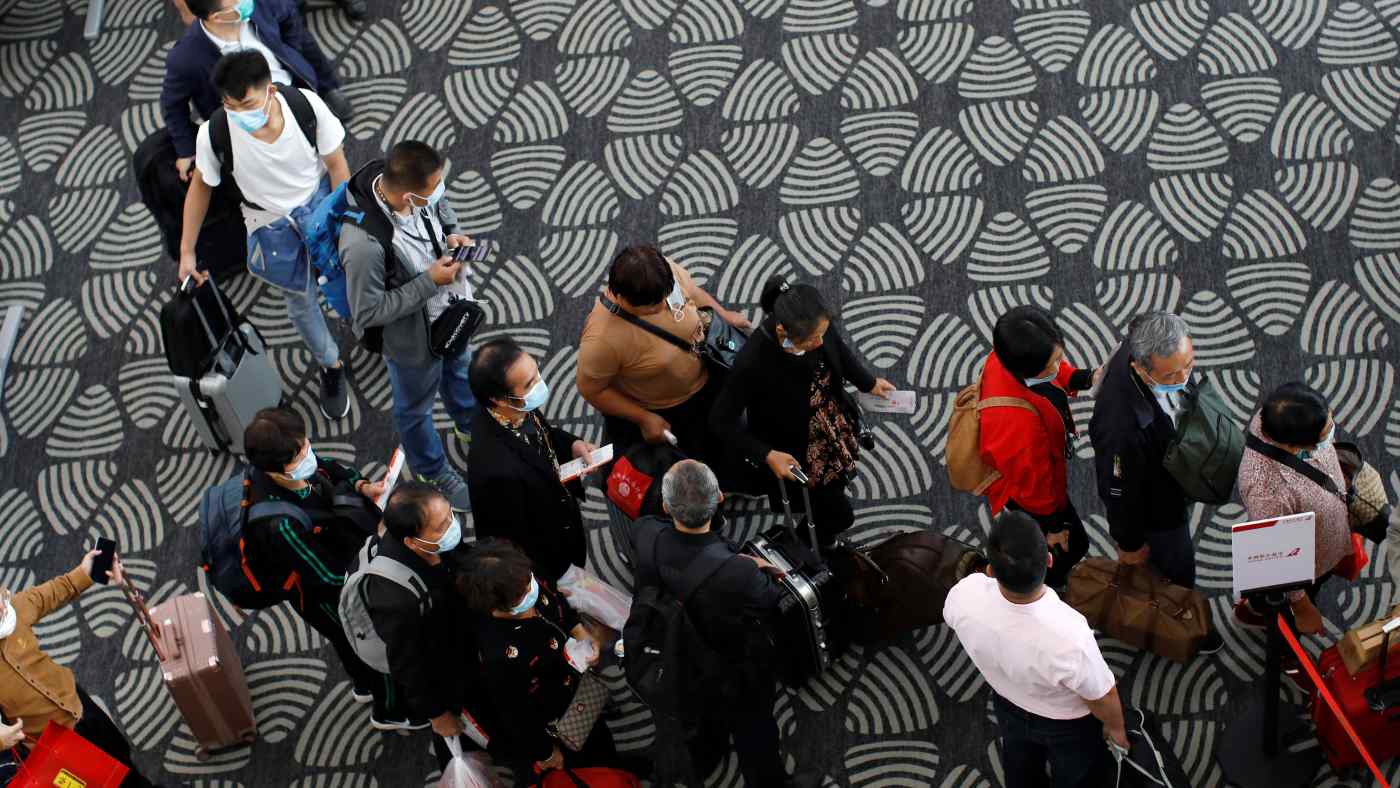 SHANGHAI -- Millions of travelers in China hit the road on Thursday as the country began its extralong National Day holiday, promising some much-needed relief to a tourism industry battered by the coronavirus pandemic.

Online travel operator Trip.com projects some 600 million people will visit domestic destinations including Hubei in central China -- the original epicenter of the pandemic -- and Xinjiang in the west, ground zero of a more recent outbreak.

That figure is lower than the 782 million tourists making trips during the same period last year, but it is the highest number so far this year.

This is the first opportunity for mass travel since coronavirus lockdowns paralyzed the country earlier this year. Despite some imported cases of coronavirus infections, China has not reported any local transmission since Aug. 21, prompting the government to ease restrictions on interprovincial group tours and increase admission limits for cinemas and tourist attractions.

This year's National Day celebration coincides with the Mid-Autumn Festival, an important cultural event, which means the holiday is eight days long, one day longer than last year.

Officials are hoping that the "golden week" will set the pace for the tourism industry's recovery following improved economic data that has come out in recent months.

Some 30,000 travel agencies in China, or three-quarters of the total, had resumed operations as of mid-September, while 91% of hotels with one-star or higher rankings have been receiving guests, according to the Ministry of Culture and Tourism.

"We have seen strong demand from our customers because after being locked down in the first quarter and with the border [remaining] closed, a lot of outbound demand have converted to domestic demand," said Jane Sun, chief executive of Trip.com during an analyst briefing on Sept. 25.

"We plan to visit our parents in Henan to make up for the travel disruptions in January," said Anne Cao, an office worker in Shanghai. Cao and her husband had to cancel their earlier trip -- and miss Lunar New Year celebrations -- due to the nationwide lockdown at the time.

Over 60% of travel is expected to be self-driving tours as travelers avoid crowded public transport, tourism officials say, with Tibet in the southwest among the favorite destinations.

"All our cars have been reserved," said a car rental operator in Tibet who only gave his last name as He. He said a tour of Tibet typically takes at least a week, making it a good match for travel-hungry domestic travelers.

Hotels meanwhile are offering discounted rooms and pre-paid vouchers to lock in demand. One five-star hotel in Shenzhen has launched a membership program with the highest "platinum" category priced at 8,888 yuan ($1,307), exchangeable for various services at higher value. "All the cards were sold out within days," the hotel manager said.

Domestic carriers flew 45.54 million passengers in August, reaching nearly three quarter of last year's figure, preliminary data from Civil Aviation Administration of China showed. The number was the highest recorded so far this year, indicating a gradual improvement and offering hope that this year's total might match last year's record, according to Guotai Junan Securities in a Sept. 28 report on the sector.

However the Shanghai-based brokerage did not expect the aviation industry to return to profitability until 2022 due to capacity surplus as the recovery in international routes remained subdued.

Not everyone is optimistic about a rebound in travel demand, despite heavy promotion by local governments.

"The pandemic only accelerated the closure of many small businesses, which had been suffering due to economic slowdown for the past two years," said Gu Xiong, a cab driver in Kunming, a city in Yunnan Province known for tourism. "I hope to gain more business this coming holiday, but I don't foresee a surge in tourists."

And while retail sales in August turned positive for the fist time this year, lingering effects from the COVID-19 lockdowns could mean a long road ahead until consumption recovers to its pre-outbreak trend, according to economic research firm Gavekal.

Many lower-income households lost their income as a result of the lockdowns and they did not receive any financial aid from the government, Beijing-based Gavekal wrote in a report on Sept. 17. "These households may need to hold down their consumption over a longer period to repair their finances."