Carrier practices keep Japan out of step with secondhand market TOKYO -- Secondhand cellphones from all over the globe are winding up in resale markets in China, which has become a go-to hub for buyers from an equally diverse array of places.

One recent morning, a commercial space in Guangzhou was filled with used handsets imported from various countries. Buyers from Africa were busy examining and picking out devices. "Phones from Japan are very popular," one vendor said, adding that they tend to be in good condition.

Nearly 140 million refurbished phones were sold worldwide in 2017, or close to 10% of sales of new devices, according to a research company in Hong Kong.

Top-selling iPhones that would cost around $880 when new are offered in this secondary market for anywhere from about $265 to $440 -- and in large volumes. "I bought about 100 of them today," said a buyer from Burkina Faso.

But while China is home to a thriving secondhand handset trade, the market is very different over in Japan, where used devices remain relatively rare despite a government push to make them more available.

About 1.8 million used phones were sold in Japan in fiscal 2017, equivalent to 5% of the market for new phones, according to the MM Research Institute. Many consumers in Japan insist on pristine products, including phones. But some, particularly the younger generation, are starting to embrace a thrift economy, buying and selling secondhand items through channels like flea-market app Mercari.

"The latest phones come with too many bells and whistles like facial recognition and a high-resolution camera," said a 27-year-old man. "I'm fine with a used handset." 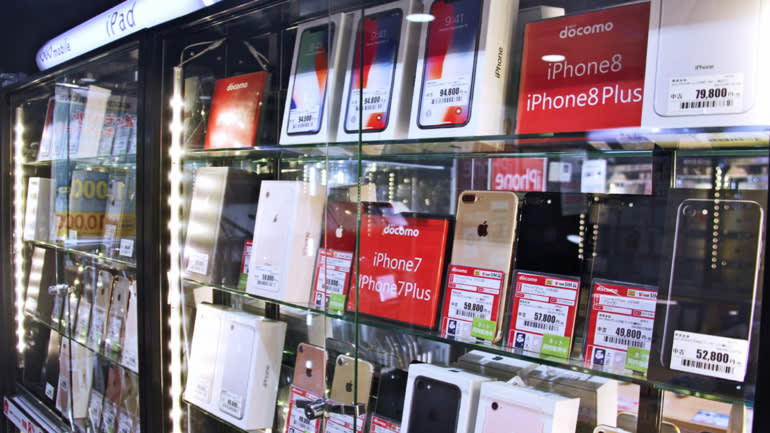 The iPhone series is popular at a store selling used phones in Japan. (Photo by Shuhei Ochiai)

The average Japanese household spent about 120,000 yen ($1,054) on communications bills last year, according to a survey by the Ministry of Internal Affairs and Communications. That accounted for 4.2% of household expenses, up from 3.5% a decade earlier. Consumers are growing frustrated with high phone bills, and Chief Cabinet Secretary Yoshihide Suga even complained in August that cellphone companies should be able to cut rates by 40%.

One reason secondhand phones are not pervasive in Japan is the practice of locking devices by the three top carriers. A used handset originally sold by NTT Docomo, for example, would not work on the networks of KDDI or SoftBank Group unless it is unlocked through a special process. The three companies have been SIM locking new phones to keep customers from switching to other carriers, while buying some 10 million used handsets a year through their trade-in programs.

Many phones that are traded in are sent to overseas markets like China, according to a source in the secondhand business. Of the few previously owned phones available in Japan, most were sold to secondhand retailers like Bookoff.

KDDI and SoftBank in the past bought used iPhone 7 Plus handsets for up to slightly over 40,000 yen -- which critics decried as topping the market price.

Such practices can be traced to the incentive agreements the carriers sign with Apple, for the right to sell subscriber-drawing iPhones. The carriers only receive a predetermined discount if they meet a sales quota, said a senior executive at a leading provider.

So the carriers focus on selling new products, using the discount from Apple to help fund lower prices offered to customers. And because consumers use the trade-in programs to lower the cost of new phones, they are more motivated to stay with their carriers.

For carriers, even if they lose money on handset sales, they can recover the loss with monthly bill payments, the thinking goes.

The Japan Fair Trade Commission complained that SIM locking and other industry practices hamper the secondhand market's growth, and the communications ministry produced guidelines in August banning leading carriers from demanding restrictions on sales of used handsets. Providers will also be required to unlock secondhand phones starting next September.

But these rules alone are unlikely to boost Japan's secondary market much. A source who deals with used handsets said that for the market to grow, the trade-ins to big carriers have to become available right here in the country.