China races ahead of West in pursuit of 5G

GUANGZHOU -- As the advent of fifth-generation wireless technology approaches, Chinese companies look to leverage their technological and price advantages to come out on top, even as Washington works to shut them out of the U.S. and other markets.

At the World Internet Conference held in November in Wuzhen, Zhejiang Province, Xiaomi CEO Lei Jun said excitedly that this company hopes to announce a 5G-compatible smartphone next March or April.

With the smartphone market in a slump, Xiaomi is among the many Chinese companies pinning their hopes on 5G technology, which boasts transfer speeds up to 100 times faster than 4G. 2019 is expected to be the first year of the 5G era, with Huawei Technologies planning to roll out a 5G phone in June and ZTE aiming to do so between July and September.

These companies are keeping a close eye on the U.S., where rivals appear to be a step ahead. Motorola is slated to release a 5G-capable smartphone early next year in partnership with wireless carrier Verizon Communications, while South Korea's LG Electronics and rival carrier Sprint plan to launch their own in the first half of the year.

This may appear as though China is playing catch-up, but the country enjoys advantages over the U.S. in certain key respects.

One is telecommunications infrastructure. As smartphone makers prepare 5G-compatible devices, wireless carriers are rushing to build the necessary networks. Chinese carriers plan a total of $400 billion in 5G-related investment over the five years through 2020.

China already has 350,000 5G cell sites, more than 10 times the U.S. total, according to Deloitte. The Asian country is expected to be the world's largest 5G market in 2025 with 430 million subscribers -- well over double the estimated U.S. figure. 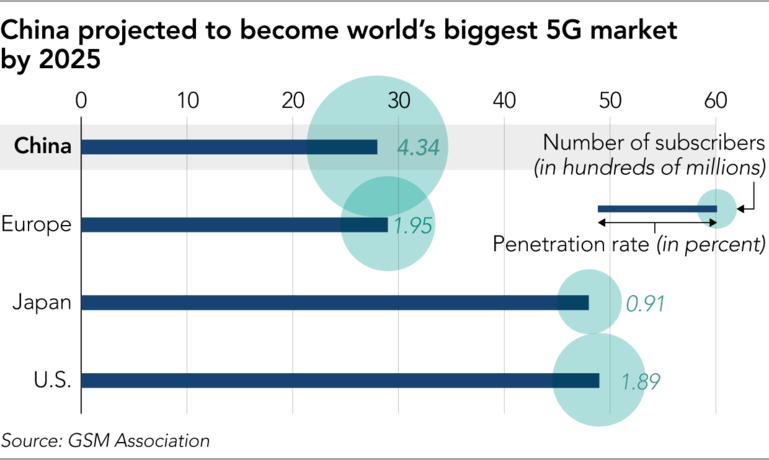 Chinese players are also gaining momentum overseas. Huawei has shipped parts for more than 10,000 base stations in 66 countries. ZTE has partnered with Dutch carrier KPN on 5G testing, and is using ultralow prices to make inroads into European markets.

China's choice of wireless technology has also given it an edge.

High-speed wireless transmission systems can be broadly divided into two types: TDD (time division duplex) and FDD (frequency division duplex). China has focused on developing TDD technology as a matter of national policy since the 3G era, while U.S. and European players have generally opted for FDD. The two perform much the same when it comes to 4G, but TDD is expected to be the main choice for 5G, as FDD cannot manage the necessary transfer speeds.

Washington is watching China's advances with alarm, owing partly to worries about Chinese-built networks enabling large-scale spying by Beijing. The U.S. and Australia have both barred Chinese players from their 5G markets, citing security concerns, and Washington has recently begun pressing major allies to do the same.

But critics argue that this is not a realistic option. Countries that shut out Chinese companies and their know-how could find their own 5G infrastructure lagging behind.

This situation prompted a ZTE executive to declare recently that his company is years ahead of European competitors in terms of 5G technology.

"It will probably take American and European businesses more than a year to catch up with Chinese companies," a former executive at a Japanese wireless carrier said.