About 400 stores will be renovated to favor new owner's products. Under the "digital transformation" initiative, all Sun Art's brick-and-mortar stores, under the RT-Mart brand, will be equipped with point-of-sale machines and automation facilities developed by Alibaba, as well as big data systems that track and analyze customer behavior, according to Peter Huang Ming-Tuan, chairman of RT-Mart China.

Huang said the adoption of Alibaba's technologies would cost about 5 million yuan ($790,000) for each store, but business would not be affected as it would not be necessary to close shops during the renovations. With the help of Alibaba's digital and customer resources, Huang expects the share of online sales to increase from less than 3% of the group's total at present to between 10% and 20% in the next few years.

The wider adoption of products offered by Alibaba, however, means the largest player in China's hypermarket industry -- which, as of the end of December, owned 461 complexes in more than 200 Chinese cities -- will significantly reduce collaborations with the e-commerce conglomerate's key rivals, especially Tencent Holdings.

Huang admitted that it was not clear whether WeChat Pay, the digital wallet developed by Tencent, would be available after the Alibaba-style makeover.

"Now we are part of Alibaba's ecosystem, we will have more and more cooperation with Alibaba, and less and less with others," said Ludovic Holinier, CEO at Sun Art Retail, adding that the group would gradually reduce the use of other companies' services and products.

Like Sun Art Retail, many traditional merchants have teamed up with internet companies to retain Chinese customers who are increasingly accustomed to the digital world. And the dominance of big players like Alibaba and JD.com have made it difficult for retail chains to start their own digital services. 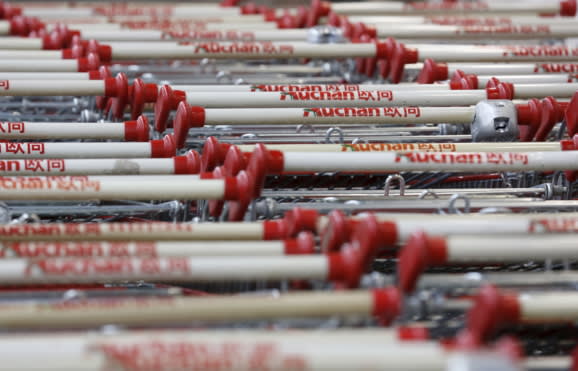 Shopping carts at Sun Art’s Auchan hypermarket in Beijing. The company is part-owned by the French group Auchan Retail.   © Reuters

The online-offline alliances come at a time when Tencent and Alibaba are locked in a fierce competition to gain the bigger share of China's lucrative online payments market, with transactions reaching $5.5 trillion in 2016, according to iResearch. The pair are also trying to recruit traditional retailers with a large number of brick-and-mortar stores as a way to expand their last-mile delivery capacities, and those in the fresh food sectors -- which have been the most difficult segment to convert to e-commerce.

Last December, Tencent purchased a 5% stake in one of China's largest supermarket chains, Yonghui Superstores, following the announcement of the Alibaba-Auchan-Ruentex alliance. The social media company announced a deal to take a stake in French department chain Carrefour's China unit. Most recently it teamed up with JD.com, an e-commerce platform rival to Alibaba, to take minority stakes in Chinese retail chain Better Life. Tencent and JD.com agreed to pay $140 million and $117 million respectively for stakes in the chain, which operates about 600 stores in China.

Holinier said the company had been looking into a potential collaboration with Tmall, a business-to-customer e-commerce platform under Alibaba, since December. Taobao and Tmall together had 580 million actively monthly users by the end of December and controlled over 70% market share of online transactions in China.

Other areas they are currently looking into include co-operations with Hema Xiansheng, Alibaba's own fresh food grocery unit, and the possibility to jointly roll out customer loans with Alibaba's financial unit.

"We have plenty of projects. We have to examine them," Holinier said.

However, Sun Art's latest result seems to be a disappointment for the market. Its Hong Kong-listed shares dropped by 9.7% to close at 9.72 Hong Kong dollars, its steepest drop in more than a year, and outpacing the fall in the benchmark Hang Seng index which lost 2.3% to close at 29,886.29 points on Monday. The drop came in spite of the hypermarket operator announcing an 8.6% increase in net profit for the full year in 2017 to 2.79 billion yuan. Revenue was 102.32 billion yuan, a mere 1.9% increase on the year.