China's crackdown on 'daigou' a mixed bag for Japanese companies

TOKYO -- An e-commerce law introduced in China about six months ago has left some Japanese companies reeling and others smelling opportunity.

The law was designed to crack down on "surrogate shoppers," small-time buying agents who purchase products overseas then sell them online in China via e-commerce or social media sites.

Aside from the surrogate shoppers themselves -- known as daigou in China -- Japanese retailers and cosmetics makers have born the brunt of the crackdown, with some reporting sales declines of around 20%.

The once-conspicuous Chinese shoppers at drugstores near Tokoy's Shinjuku Station, easily recognized by their bulging shopping bags, have all but disappeared.

One Chinese resident in Japan said his monthly earnings from reselling Japanese cosmetics and diapers peaked in 2015 at about 200,000 yen ($1,854). But he left the business last summer after Beijing announced the tighter restrictions.

Chinese tourists flocking to Japan in recent years have acquired a taste for Japanese products, many of which are unavailable in China or if so, very expensive. This gave rise to surrogate shoppers, who cashed in on the fad for things Japanese.

People buying from surrogate shoppers could avoid duties, for example, by having purchases mailed to them, with the products listed as personal items to lower duties.

But in January, Beijing implemented the new law, requiring e-commerce site operators to register with Chinese authorities and pay taxes, as well as police their sites for counterfeit or gray-area goods. Because surrogate shoppers depend on e-commerce platforms and social media, the law was a big blow.

This in turn hit Japanese retailers as the flood of surrogate shoppers dwindled to a trickle. Sales data from about 5,000 drugstores compiled by Tokyo-based research company True Data showed per-store spending by foreign visitors fall 19% on year in the January-April period.

The number of receipts issued also dropped 20%, despite a 4% rise in the number of foreign visitors to Japan. Chinese visitors jumped about 10% during the same period.

"China's tightened restrictions have led to a sharp decline in Chinese brokers who buy Japanese products in bulk," said an executive of a Japanese drugstore.

The new law has hit baby diapers particularly hard, with consumer goods maker Kao experiencing a 20% year-on-year decline in sales of its popular Merries diapers in the January-March quarter.

And while cosmetics maker Shiseido saw sales to foreign tourists jump 6% in the quarter, sales to surrogate shoppers declined by around 15%.

Spending by tourists still remains solid, with the purchase amount per receipt rising 5% to about 16,000 yen in the January-April period, according to data from True Data.

"Bulk purchasing by individual travelers still continues," said Maya Miyaoka, an analyst at True Data, noting that the average spend of foreign tourists appears to have increased because they have bought more for themselves, or families and friends -- not for resale.

Japanese department stores have remained largely unaffected by China's new law. Duty-free sales at department stores dropped in January, but hit record highs on a monthly basis in the February-April period, according to the Japan Department Stores Association.

Both the number of shoppers and average spend per customer grew, indicating that there is still strong demand for high-quality products and services.

And while China's new law squeezes surrogate shoppers, it also includes measures that could bolster official sales channels, including tax breaks for cross-border e-tailers. For Japanese companies, an increase in sales via official channels will also prevent their brands from being tarnished by bargain pricing.

Kazutoshi Kobayashi, President and CEO of cosmetics maker Kose, welcomes the law, saying it will normalize the market. 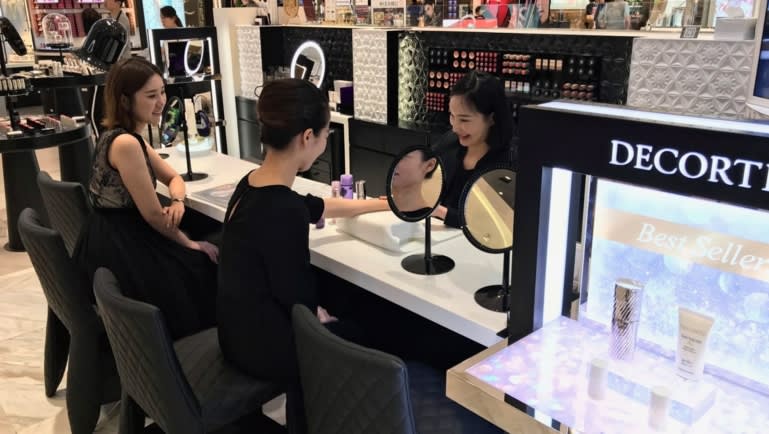 Kose's Shanghai branch hopes to see sales rise as a result of the stricter e-commerce regulations.

Some Japanese companies have been strengthening their sales channels as surrogate shoppers disappear. Pharmaceutical maker Ryukakusan saw sales of its popular cough drop via its cross-border e-commerce site rise dramatically as sales to surrogate shoppers plunged. The company now has offers from authorized Chinese buying agents to handle sales of its products that are unavailable in China. It will also consider setting up new sales channels on its own.

Meanwhile, men's cosmetics maker Mandom opened a flagship store on Alibaba Group Holding's e-commerce site Tmall. Shrinking numbers of surrogate shoppers weighed on the Japanese company's sales to foreign visitors by about 1 billion yen from a year earlier in the fiscal year ended March. The Tmall store is making up for this, offering 32 items, including sheet masks, which are popular with Chinese.

Others in China see opportunity in the shifting landscape. Onion Group, a cross-border Chinese e-tailer, set up a Japanese unit in April as an authorized purchasing agent, filling the vacuum left by fleeing surrogate shoppers. Fully in compliance with the new regulations, the company offers popular Japanese products while introducing unknown but promising items via social media and similar platforms.

Concerns are mounting over China's slowing economy due to trade tensions with America. But as the country's middle class continues to grow, businesses around the world are still scrambling to sell to welcoming Chinese consumers.