TOKYO -- In the past two years, eight plants have been set up in China to produce smartphone panels. Five more are scheduled to start operating in the next two years.

Backed by massive state funding, Chinese panel makers are taking a bigger bite of the market for smartphone display panels, which has so far been dominated by Japanese and South Koreans makers.

As the smartphone market slows, Chinese panel makers have increased their capital investment -- even at the expense of profitability -- in a bid to close the gap with Japanese and South Korean rivals, who are finding it more difficult to maintain their technological edge as the Chinese acquire more sophisticated production technologies.

And as seen in other key industries, such as steel and solar panels, the display panel sector could be headed for an oversupply crisis, triggered by the breakneck expansion of Chinese manufacturers.

So far, the Chinese have captured a combined 30% share of the global market for small and midsize display panels, worth about $40 billion in 2017 -- and not just by expanding production capacity, but by improving quality control as well, reducing the proportion of defects in their output.

One major Chinese panel maker, Tianma Microelectronics, increased the value of its shipments of such panels by 66% in 2017 over the previous year to $3.7 billion, according to information provider IHS Markit. 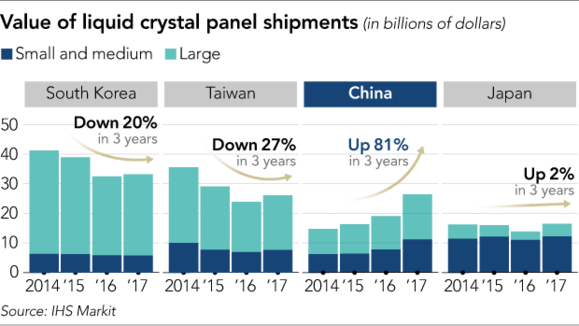 Tianma's second plant in Xiamen, Fujian Province, began operating at the end of 2016. Initially, it had trouble mass-producing high-definition LCD panels, and some smartphone makers in China refused to accept panels from the plant, according to a person close to the company.

But that has changed. Tianma, which purchased the LCD business of Japan's NEC in 2011, invited NEC engineers to help improve the no-defect rate through better production technologies.

The boom in shipments is good news for suppliers of materials to make such display panels.

"Orders for materials have risen to a high level, as full-capacity production has started at last," said an official with a Japanese supplier to the plant, noting that the yield has improved sharply over the past year.

Shipments by another major Chinese panel maker, BOE Technology Group, logged a 26% increase in 2017. The overall 30% market share of Chinese manufacturers compares with that of the combined share of the Japanese makers, Japan Display and Sharp.

The applications for LCD panels have evolved over the years, from black-and-white calculators to color televisions, largely driven by technological developments led by Sharp and its fellow Japanese electronics maker, Casio Computer.

Around 2000, South Korean and Taiwanese manufacturers began aggressively expanding into the field. In 2001, IBM Japan sold its LCD panel business to a Taiwanese company, prompting Japanese makers to cut back on production.

In 2012, Japan Display was founded through the integration of the operations of six Japanese companies. Japan Display and Sharp are now the only major panel makers in Japan. Since 2016, Sharp has been owned by Taiwan's Hon Hai Precision Industry, better known as Foxconn.

The Japanese makers have shifted their focus from large display panels used for TVs, to small and midsize ones for smartphones, personal computers and in-car devices that require higher definition, and which are more difficult to produce.

Along the way, the technologies involved in producing display panels have been transferred to South Korea, Taiwan and now China.

Having expanded their market shares in larger panels with the support of local governments, Chinese makers are now moving aggressively into the market for small and midsize panels. To catch up with South Korea's Samsung Electronics, which has shifted to prioritizing next-generation organic light-emitting diode panels, Chinese makers such as BOE and China Star Optoelectronics Technology have themselves built plants for OLED panels, in addition to those for LCD panels.

The construction of some Chinese plants is funded by local government investment funds. Plants for LCD and OLED panels are both eligible for billions of dollars of subsidies, according to people familiar with the matter.

"Chinese companies actually pay only 20% or so of capital spending," said an engineer who joined CSOT from a Japanese maker.

Chinese panel makers have supplied their products almost exclusively to local users, including Huawei Technologies. The technological difficulties of achieving stable mass-production have so far kept them from supplying panels for the market leading Apple iPhone.

But in the January-March period, sales of smartphones slowed in China from the year earlier, marking the fourth consecutive quarter of slowdown. This has raised concerns about an oversupply of display panels -- especially given the rapid pace of new plant construction.

To keep growing, Chinese panel makers may therefore need to increase their supply of products to U.S., Japanese, South Korean and other overseas smartphone makers.