China surges ahead of US in AI startup funding

The country now also world's No. 1 in patent publications Alibaba Group Holding is using facial recognition technology in payment services, such as this "Smile to Pay" platform in China.

TOKYO -- Chinese companies won nearly half of all funding for AI startups last year, vaulting past the U.S. and firmly establishing the country as a global leader in the field.

Artificial intelligence startups worldwide raised a record $15.2 billion in 2017, according to American research firm CB Insights. Chinese businesses accounted for 48% of the total, up from just 11.6% in 2016. The U.S. placed second with 38%.

Chinese startups are plowing much of this funding into facial recognition technology -- an area Beijing supports as a matter of national policy -- and AI chips, for which global demand is growing.

Megvii Technology, which has partners in the public and private sectors, has gained access to facial data on 1.3 billion people, CB Insights said. Yitu Technology won a facial recognition accuracy contest hosted by the U.S. government after honing its tech with the help of Chinese public security authorities. Guangzhou-based CloudWalk Technology and Hong Kong's SenseTime are also major players.

Chip developer Cambricon Technologies, which is under the auspices of the Chinese Academy of Sciences, announced last August it had secured $100 million in funding from Alibaba Group Holding and other investors. The likes of Alibaba and rival JD.com are employing facial recognition technology in such applications as automated convenience stores. 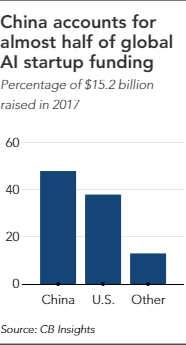 China has outdone the U.S. in AI-related intellectual property as well. Chinese patent publications with the terms "artificial intelligence" or "deep learning" in the title or abstract surged from 549 in 2016 to 1,293 in 2017, compared with just 135 and 231, respectively, in the U.S.

An analysis of AI-related research papers by The Nikkei and Dutch academic publishing giant Elsevier found that while the U.S. was home to five of the 10 organizations whose work was cited most frequently between 2012 and 2016, China was not far behind with two.

The two countries collaborate as well as compete in AI, an executive at a Chinese startup said. Despite past clashes with Chinese authorities over demands to self-censor search results, Google has said it will establish an AI lab in the country.

Japan, while overshadowed by the U.S. and China, has a presence in the field as well. Tokyo-based Preferred Networks, a developer of AI for autonomous driving and other applications, has received 11.5 billion yen ($107 million) in funding from Toyota Motor.