GUANGZHOU -- China, the world's largest auto market, has quickly become one of the leading incubators of self-driving technology.

The entrepreneurs leading the startups behind the revolution largely hail from Baidu, China's answer to Google. They aim to make autonomous driving commercially viable in two years' time, backed by ample investment capital and government incentives.

JingChi, a startup founded in April of last year, began letting the public participate in test drives in its self-driving vehicles this January. "Our aim is to immediately raise the awareness of automated driving," said a representative.

When this reporter visited JingChi's campus just outside the southern China metropolis of Guangzhou in mid-April, the company offered a ride-along in the back seat of a Lincoln MKZ test car, with the condition that no pictures are taken while on the road.

During the roughly 20-minute trip, the Lincoln smoothly accelerated to a maximum speed of 40km per hour. The car handled U-turns and automatically slowed down when bicycles suddenly crossed in front of it.

Through it all, the engineer seated at the driver's seat touched neither the steering wheel nor the gas pedal. Like other major Chinese peers in the field, JingChi plans to commercialize "level four" automated driving by 2020. That tier is one notch below full automation in which the vehicles face some restrictions in where they can travel.

Tony Han, who served as the chief automated driving scientist at Baidu's Silicon Valley unit, left the company to launch JingChi. The startup was also headquartered in the American tech hub -- but only for nine months.

"There was generous support from the Chinese government, and [Han] repatriated to China where he launched the present-day JingChi," said a senior company executive.

The state incentives are indeed lavish. The local government shoulders the entire lease of JingChi's home office. And 100-plus employees live rent-free in freshly built condominiums financed by the largesse.

"I really am grateful," said a JingChi executive. "Thanks to local government subsidies, I'm able to work with peace of mind." 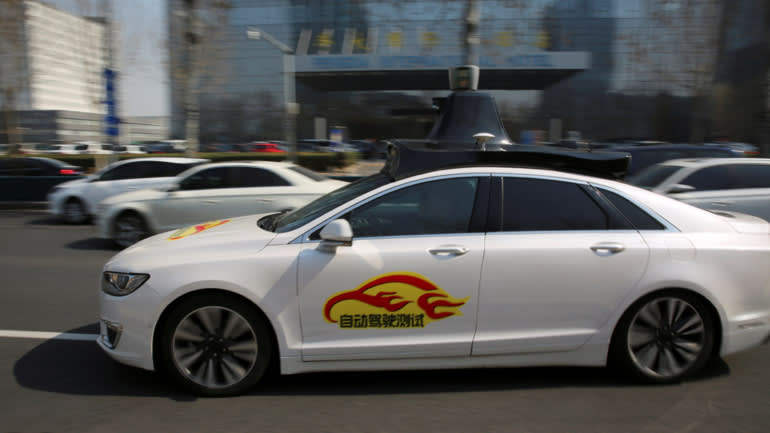 An Apollo autonomous car from Baidu during a public road test for self-driving vehicles in Beijing on March 22.   © Reuters

JingChi is hardly the only one staking this path. The majority of Chinese self-driving startups trace their roots back to Baidu's Silicon Valley development hub. Other Chinese engineers honed their skills at Waymo, the autonomous driving unit of Google parent Alphabet. These scientists later returned to their home country and started their own businesses, creating a thriving sector across the Pacific.

"Baidu used to have four top autonomous driving engineers," said an industry insider. But all four had left by last year, making their way from the U.S. to China to start their own companies.

Wang Jing, a member of the quartet who was the general manager of Baidu's automated driving operation, is another founding member of JingChi. Wang stepped down as JingChi's CEO earlier this year amid an intellectual theft lawsuit from Baidu.

China reaches out to Germany under 'free trade' banner

Although it is not even a year old, Pony.ai has developed automated vehicle technology that is on par with JingChi's. Shenzhen startup Roadstar.ai, also founded by Baidu alumni, raised $128 million in last month's fundraising round. Pony.ai also captured $150 million in backing.

The leaders in China's self-driving technology field are Baidu, which launched the Apollo autonomous vehicle project last year, and startups founded by former Baidu personnel. They are competing with each other to develop driverless tech while collaborating with automakers. Mainland industry insiders share the view that China and the U.S. are by far the leaders in this sector's development, and the behind-the-scenes competition to gain a technological edge and to poach talent has become fierce.

China still lags somewhat behind the U.S. in high-tech advancement. "If America's technological level is at a 10, China would be an eight," said a Pony.ai executive.

Yet China, under the "Made in China 2025" banner, is making a furious attempt to catch up, powered by hefty government subsidies. Part of the current trade friction between Beijing and Washington stems from the U.S. pushback against that approach.

The U.S. State Department is rolling out tighter restrictions on visas issued to Chinese nationals in certain tech areas. Staring Monday, graduate students in such sensitive fields can reside stateside for only one year, down from five years. Other Chinese seeking visas will face additional red tape if they work for tech entities under special scrutiny.