With expertise acquired, joint ventures are now surplus to requirements

TOKYO -- Having built up a wealth of expertise and technology through joint ventures, Chinese autoparts makers have set their sights on global expansion.

Many companies were happy to oblige when foreign manufacturers sought local partners to enter the Chinese market. But many of the companies involved in tie-ups now find they have diverging objectives.

Huayu Automotive Systems is set to buy Japanese headlight maker Koito Manufacturing's stake in a joint venture for about $244 million this month.

The partnership, Shanghai Koito Automotive Lamp, has the largest production capacity of any entity within Koito's China operations, but strategic differences with its local partner have prompted the company to sell its 45% share.

Huayu is a unit of automaker SAIC Motor, and has pushed for the venture to enter overseas markets. It wants to sell components to SAIC's partner General Motors and other global automakers for their operations in Europe and the U.S. This, however, would put it in direct competition with existing Koito plants.

Zhang Yi at Nomura Research Institute said that partnerships made for a win-win situation at the initial stage, but that looks set to change with the market having grown significantly. One study estimates that the country's automobile parts industry now generates more than $400 billion in sales.

"At some point both sides should review things like product mix and the scheme of the joint venture," said Zhang.

Now that the Chinese makers have gained technological expertise and set up sales networks in their home market, many are looking to go their own way to develop growth abroad. 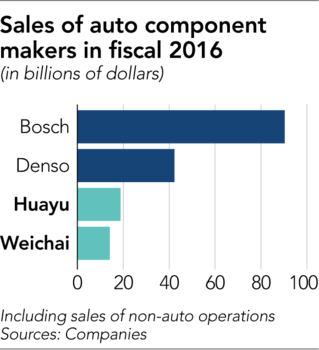 Jiangsu Gissing Auto Parts Group, a vehicle interior manufacturer, has set up a unit in Japan. Its growing presence is becoming a threat, according to a Japanese autoparts maker.

Takata filed for bankruptcy protection in the U.S. and Japan in 2017, following extensive recalls of defective products. The company in November signed a deal through which it will sell nearly all of its operations to Key Safety Systems. Moves like these have the backing of the Chinese government. In the mid- to long-term development plan for the auto industry it released in April, Beijing laid out plans to foster parts manufacturers that can generate annual sales of 100 billion yuan ($15.7 billion) by 2020. Another goal is to get Chinese players into the world's top 10 by sales amount by 2025. Figures like these are considerably lower than those of leading global players. Bosch racked up 73.1 billion euros ($89.7 billion) in sales for the year, while Japanese manufacturer Denso managed roughly 4.5 trillion yen.

Having reaped the benefits of foreign partnerships at home, many Chinese companies are now primed for an assault on overseas markets.