Liaoning Publishing Group has opened a 24-hour bookstore in Dalian where customers can read and relax.

DALIAN -- In the battle of the bookstores, Chinese bricks-and-mortar shops are taking new steps to win customers in the face of an onslaught from their online rivals.

Dalian, in northeastern China, saw the arrival of its first 24-hour bookstore in the spring. Wuhu, 300 km west of Shanghai, has a "sharing bookstore" that lends out books. It opened at the end of last year.

In China, sales at bricks-and-mortar bookshops have been flat, while those of online bookstores are rising sharply. Offline shops are countering by offering "experiences" such as cafes.

Liaoning Publishing Group, based in Shenyang, opened the all-night bookstore in Dalian at the end of March in a five-story, European-style building in the city center. It has a cafe and rest space, and is popular with customers. Bookstores in China typically close no later than 9 p.m., but the Dalian bookstore not only stays open through the night, it has no fixed holidays.

A 31-year-old woman living in Dalian, who gave only her family name, Li, visits the shop occasionally. "I want to continue to use it because it is open even when other bookstores are closed, and it is very convenient," she said. 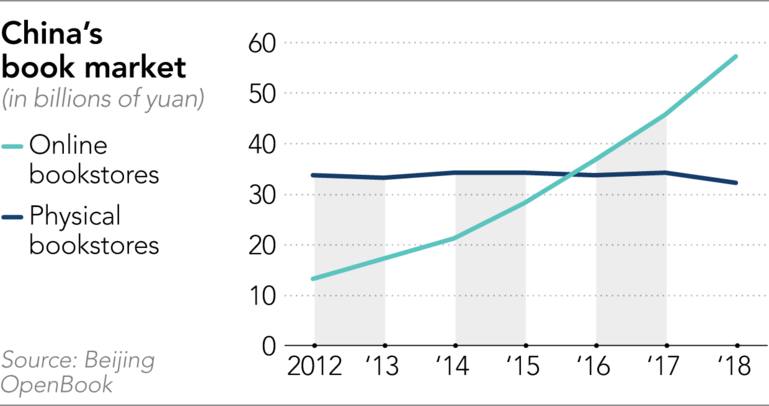 After 9 p.m., only the first floor remains open, limiting the number of books the customers can browse. Another drawback is the lack of restrooms on the first floor, "I felt it is an inconvenient place to stay for a long time at night," said a male office worker in his 30s.

The 24-hour bookstore is still experimenting. It has introduced a membership system with various privileges. Members receive a 20% discount on purchases after paying a fee of 598 yuan ($87). Members can also borrow books instead of purchasing them. Such "sharing bookstores" are growing in China and function as company-run libraries. The shops hope to attract more customers by making it easier for people to drop in.

The state-run Xinhua Bookstore also opened a book-lending shop at a mall in Wuhu in December 2018. According to local media reports, customers can borrow up to two books free of charge for 10 days at a time. After that, the customer is charged 1 yuan per day for each book.

Bricks-and-mortar shops face other threats besides online competitors: The number of people who do not read books is rising in China, especially among young people. This is forcing bookshops to look for other ways to drum up sales.

Some companies, including Taiwan's Eslite Bookstore, have expanded and added cafes over the last several years and others have followed suit.

According to a survey of 62 companies operating bookstores in China, cafe and restaurant sales make up between 10% and 20% of revenue at 13 companies, and more than 20% at 18 companies. Stationery and other goods accounted for more than 10% of total sales at 41 companies. The survey was conducted by the Books and Periodicals Distribution Association of China and others.

In 2018, the number of physical bookstores in China rose 4.3% from a year earlier, while the number of employees climbed 5.5%, year-on-year, according to the association. In addition to new outlets opened by big chains, independent bookstore openings are also on the rise, the association said.

By offering such services as cafe dining, in addition to the traditional literary escape, physical bookstores hope to fend off the online challenge.