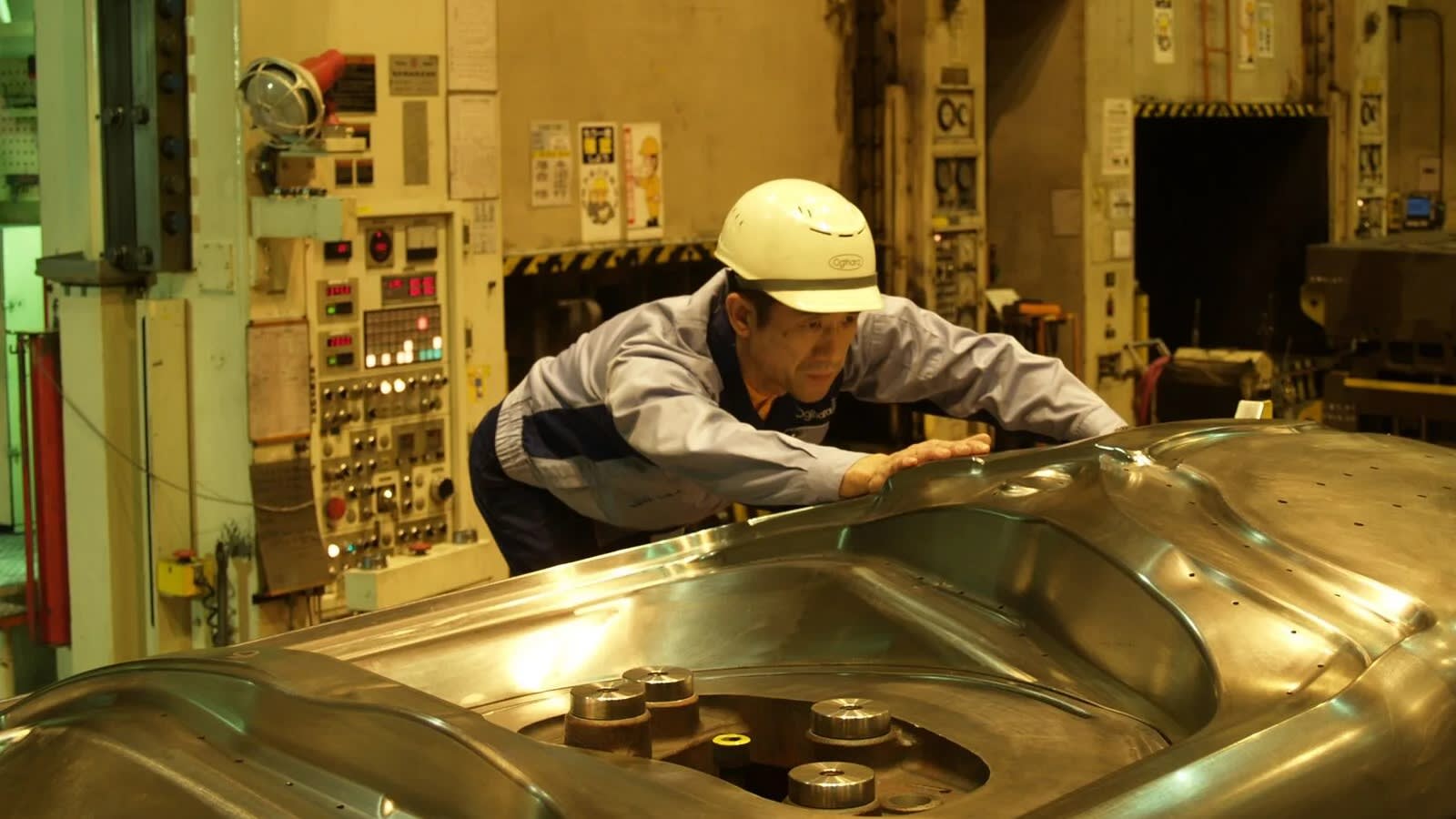 TOKYO -- Chinese investment is flowing into the backbone of Japanese industry: small and midsize component makers that supply major manufacturers like automakers and electronics brands. In 2018, buyers from China acquired a record 25 unlisted companies in Japan.

Many of the target businesses have been pushed to the brink by slumping sales and an inability to find successors for aging leaders. For some, backing from China not only keeps them afloat but also unlocks new sales channels across Asia. But there are also concerns about how the U.S.-China trade war might affect them, and Japan Inc. is under pressure to do more to shore up its supply chains.

Electronics component maker New Shicoh Technology is among the companies that have been resuscitated with injections of Chinese cash. Founded in 1976, Shicoh supplied micro motors to Intel and at one point was the exclusive supplier of actuators -- parts that focus smartphone cameras -- to Apple.

But after it lost the Apple contract, the company went under in 2012. When rescue talks with fellow parts maker and sponsor MinebeaMitsumi fell through, Shicoh transferred its business to a parts supplier in Shanghai the same year.

At the time, New Shicoh Technology had no clear successor and "China was a lifeline to prevent the company from going out of business," a senior company official said. The growth of the Chinese smartphone market made the arrangement all the more attractive. 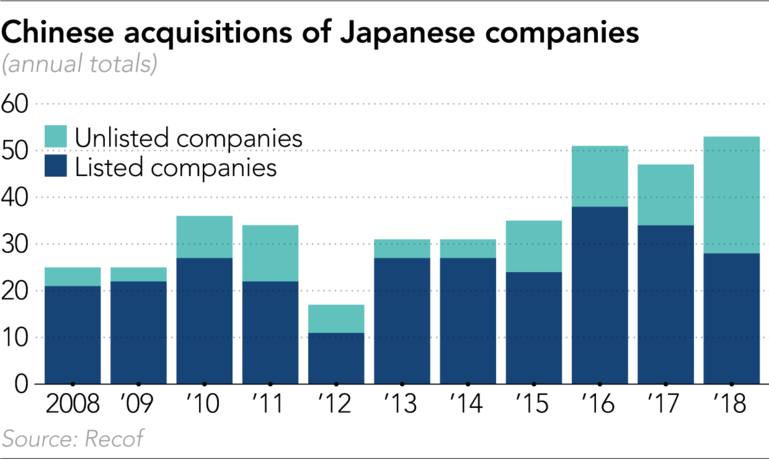 At the end of 2016, Shicoh changed hands again, this time to the founder of major Chinese electronic parts manufacturer Shenzhen O-Film Tech. This has given the Japanese side access to "advanced technology trends at monthly O-Film executive meetings," said an official in Shicoh's research and development division.

The company, which has a small office in the Kanagawa Prefecture city of Yamato, near Tokyo, continues to produce actuators. Most of its output goes into smartphones made in China, including Xiaomi handsets. Its total shipments of actuators, including domestic transactions, are expected to surge 50% on the year to about 200 million units in 2019 -- a 900-fold increase from 2013, the year after the company's failure and original sale.

According to Teikoku Databank, a Japanese credit research agency, companies from the rest of Asia were involved in the management of 1,712 Japanese companies through capital injections as of the end of 2017. This includes Asian companies' subsidiaries in Japan.

Of that total, a leading 448 were at least 51% owned by Chinese companies.

Over the years, the bulk of investment in Japanese companies from the rest of Asia has focused on nonmanufacturing sectors, such as finance and services. This drove a tenfold increase in the balance of investment from 2000 to the end of 2017, to 5.29 trillion yen ($48 billion), according to the Japan External Trade Organization.

But Chinese buyers are expanding their scope. JETRO said it expects an increase in Chinese acquisitions of Japanese companies that make consumer goods that are popular in the cross-border e-commerce market.

The 25 acquisitions of unlisted Japanese businesses by Chinese investors last year, recorded in a survey by M&A advisory Recof, marked a sixfold increase from the annual tally in 2008, on the basis of published transactions.

While Chinese companies were homing in on Japanese targets, Japanese companies also made a record number of overseas acquisitions in 2018. "They are overlooking small factories that are being forced to go out of business due to difficulties passing their businesses to the next generation, despite having technologies," one M&A broker said.

Japan's local banks can only do so much to support these companies.

The government is looking at easing regulations on equity investments by local banks in micro, small and midsize manufacturers, on the condition that the goal is to help the companies with succession. But local banks are typically reluctant to acquire equity stakes in small domestic companies with questionable profitability, allowing Chinese players to move in.

Citic Capital Partners Japan, a fund belonging to Chinese state conglomerate Citic Group, has taken advantage of the opportunity. Since 2004, it has invested a total of about 35 billion yen to acquire 14 small and midsize Japanese companies. One of them is Moritex, a company in Asaka, Saitama Prefecture, not far from Tokyo. Moritex makes special high-definition lenses with no distortion and sells them as testing equipment for automated factories.

After it was acquired by Citic's fund in 2015, Moritex moved production to China to cut costs. The company can now make products in small quantities with more flexibility, said Hironobu Nakano, head of Citic Capital Partners Japan.

Yet another example is Shinmei Electric, a switch manufacturer in Kawasaki, Kanagawa Prefecture, which was acquired by China's Dalian Pengcheng Group in 2012. It changed its main product from a PC switch to an automobile switch, which fetched three times the price.

Starting this year, Shinmei Electric will mass-produce door opening and closing switches for Chinese automakers. "There are many inquiries from makers that pay a lot of attention to high quality," Vice President Hitoshi Yamamoto said.

At times, the Japanese companies pay a price for coming under Chinese control. Small and midsize businesses interviewed by Nikkei said they had seen temporary declines in transactions with domestic customers immediately after they were brought under Chinese umbrellas, due to concerns that quality might suffer. But they said they gradually regained the trust of their Japanese customers, partly by inviting them to visit production bases in China. In some respects, a foreign buyer is preferable to a Japanese one. "Even if major Japanese companies bail them out, their situation may continue to deteriorate without being able to expand overseas," said an executive at one Chinese-affiliated company.

The risk is that the recent slowdown in the Chinese economy and the trade dispute between Beijing and Washington will end up hurting the smaller Japanese companies.

"Deliveries to American companies may be blocked at any time," said a parts maker affiliated with a Chinese company. Other companies expressed a similar concern.

Still, Japanese industry appears to have reached a turning point.

The pyramid structure, which had major electronics and automobile manufacturers at the top and a vast network of parts suppliers below, was suited to an era when the smaller players were focused on domestic sales. But small and midsize manufacturers are looking to survive by selling parts abroad under foreign ownership.

Now the big Japanese players are facing competition to line up partners, and are under pressure to not only retain small suppliers but also support their overseas expansion.