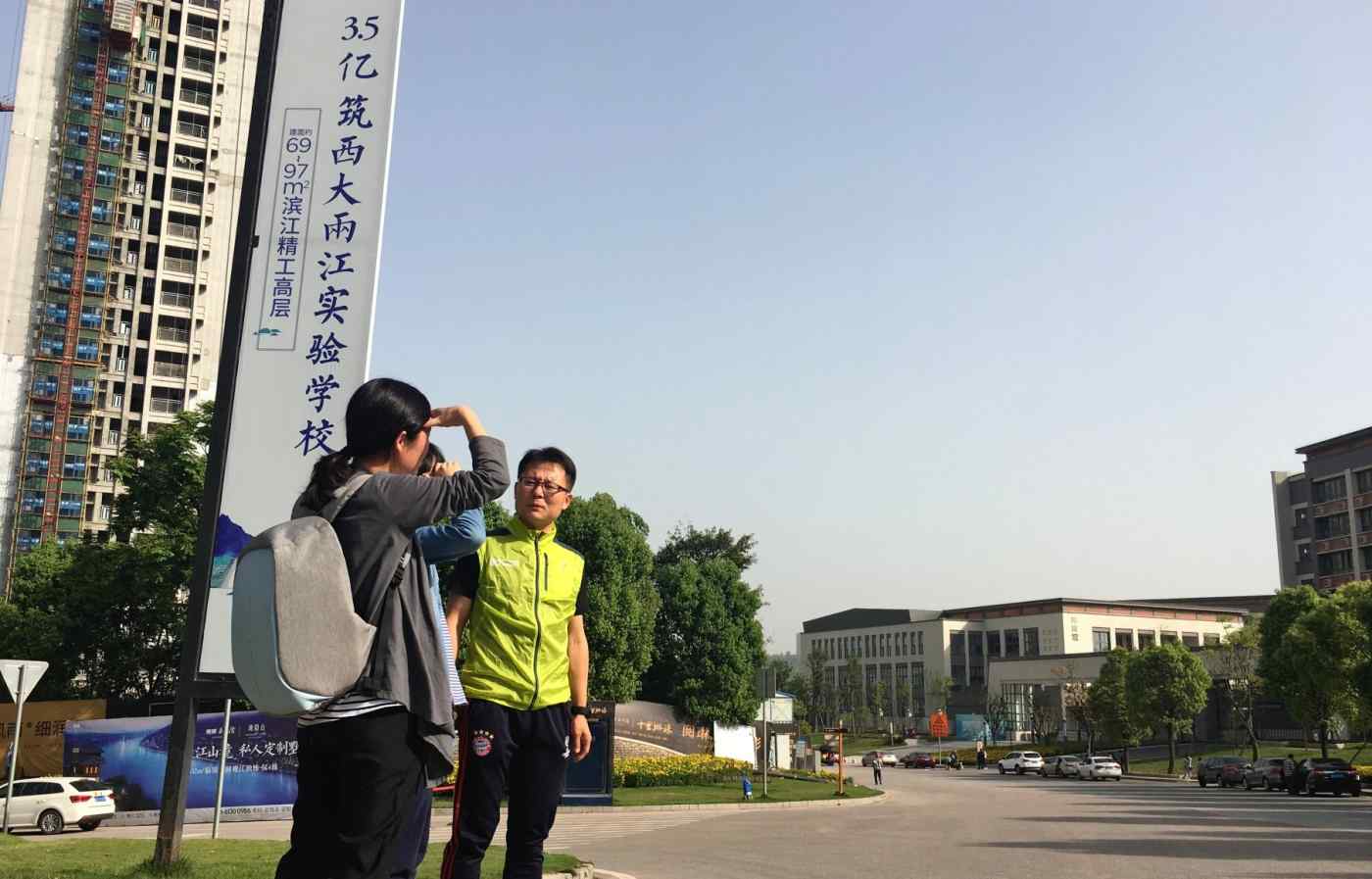 Condominiums, left, are popular because they come with guaranteed admission to a prestigious school, right in the back, in Chongqing.
SHUNSUKE TABETA, Nikkei staff writerMay 4, 2018 13:58 JST | China
CopyCopied

CHONGQING -- Condominiums that come with guaranteed admission to top local elementary and middle schools are gaining popularity across China as parents scramble to give their children whatever advantage they can afford in the country's fiercely competitive education system.

These properties -- called xuequfang -- have risen up in many regional cities like Chongqing, Nanjing, Wuhan and Shenzhen. They are sold at a premium by developers, and also give schools and teachers extra business opportunities. But they also symbolize how economic inequality is creeping into China's classrooms.

At one showroom in Chongqing, an agent enthusiastically pitched a condominium being developed about 30km from the city center. The units come with a guaranteed spot at a middle school affiliated with the prestigious Southwest University that opened last September.

"Your child would have a bright future after entering this school," the agent said. "I highly recommend this property."

The new middle school was launched jointly by the condo developer and an existing high school, also affiliated with Southwest University. It boasts cutting-edge facilities and an experienced faculty, and its graduates are also given priority admission to the high school, which sends many students to China's top universities.

This is a perk many parents are willing to pay extra for. The next batch of units to go on sale is likely to be priced more than 30% higher than comparable properties nearby.

China's one-child policy, which lasted for more than 30 years until 2015, has allowed not only parents but both sets of grandparents to focus all of their money on one child. It now takes at least 700,000 yuan ($110,000) to put a child all the way through college, according to one local news outlet. The price is even steeper in big cities where cram schools cost more, coming out to 2.76 million yuan in Beijing and 2.47 million yuan in Shanghai.

More than 30% of that money is spent during the middle and high school years, which determine whether a student can make it to one of China's most prestigious universities. Graduates of a top school like Peking University or Tsinghua University are more likely to score coveted jobs at state-run companies and government agencies.

Out of Peking University's graduates last summer, 30% went to work at a state-run company, followed by 17% at government agencies. Those who went into the private sector found jobs at well-known companies like Huawei Technologies and Tencent. Tsinghua graduates followed a similar pattern, though many also made their way to the State Grid  Corp. of China and the China National Nuclear Corp.

Nearly 43% of Chinese high school students entered college in 2016, and higher education is no longer a dream reserved for wealthy families. But growing competition, heightened by economic inequality, has produced serious side effects. For example, more teachers now also work after hours at cram schools. Some of them end up focusing more on the cram schools, which pay better, at the expense of their day jobs.

A middle-school student in Sichuan Province committed suicide last year after she was allegedly pressured by her teacher to join a cram school where the latter also taught, which cost 10,000 yuan a year. The student is also believed to have been under immense pressure from the mountain of homework she faced every night.

Many affluent families are sending their children overseas to escape the rat race at home, hoping that better English skills and a foreign diploma will boost their chances of working at a foreign company in China.

"Sending your kid abroad is even more expensive than sending them to cram school," said a government worker in Beijing with a child in middle school.

"At the end of the day, money is important, so the only thing I can do is work harder," she said.