Chinese smartphones and apps break through to young Japanese

Huawei P20 and 'Knives Out' show what matters: Being stylish and handy

"Knives Out" has been downloaded by more than 300 million users around the world.
HIROYUKI KOBAYASHI, SHOHEI KONO and SHUNTARO NIMURA, Nikkei staff writersAugust 29, 2018 14:36 JST | Japan
CopyCopied

TOKYO -- Japanese once considered Chinese products to be inexpensive and of poor quality. Young Japanese, however, have a new take. To them, Chinese gadgets, games and apps are stylish.

One example is "Knives Out," a battle royal-type, last-man-standing smartphone game. Since Chinese internet company NetEase released the app in November, the title has attracted more than 300 million downloads worldwide.

In Japan, "Knives" has been one of the top three free apps for six consecutive months.

About 100 players compete against one another on, say, an uninhabited island. "I only need a smartphone to play the game anywhere with friends," an 18-year-old boy said. There have been similar games, but mostly for home consoles. The smartphone-ready handiness of "Knives" seems a major attraction.

"It does not matter whether the app is from China or elsewhere," a 14-year-old schoolgirl said. The Tokyoite said she used to like rhythm game apps but got hooked on the battle royal-style game after a friend recommended it.

Now, she said, "I'm scared that I could be addicted to the game."

According to the operator of Mirrativ, a free gamestreaming app, about 1 million players in Japan had livestreamed "Knives" as of July. Tik Tok users can add their favorite music for free to short videos they shoot themselves.

Japanese teens are also digging Chinese app Tik Tok, a kind of social network that allows users to choose music that they can add to short videos they shoot themselves. The app comes from the startup Bytedance.

The app had 200 million monthly active users in July, a number that will likely continue rising. Bytedance last year bought musical.ly, a similar video-sharing app that was already popular in the U.S. The services were merged in August.

Tik Tok broke through with some unique advertising. Fashion models and other celebrities then began posting short videos, sparking explosive use of the app in Japan. Some users have gone on to become popular models and idols.

Chinese smartphones themselves caught fire in Japan a while back, at least in the SIM-free market. According to BCN, a Tokyo-based online marketing agency, China's Huawei Technologies in July had 49.2% of Japan's SIM-free smartphone market. 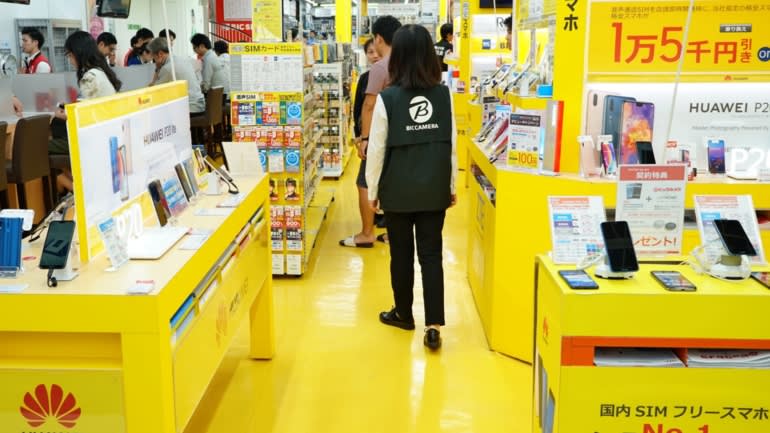 Huawei has a big presence in the SIM-free smartphone section at Bic Camera's Yurakucho branch, where its P20 phones have caught on with young consumers.

On the first floor of the Yurakucho branch of Bic Camera, an electronics and appliance retailer, the Chinese smartphone brand occupies a prominent booth in the SIM-free section. Huawei raised its brand recognition in Japan earlier this year with the release of the P20 series, according to a Bic Camera representative.

The cheapest phone in the series, which has a full-screen display, quality camera and sleek, iPhone X-like design, costs about 30,000 yen ($269). Buyers are mostly in their 30s.

"Some users had been hesitant to go for a Chinese brand," a manager at the Yurakucho store said. "But with improved user support, Huawei is now attracting a wide range of customers." A woman in her 60s said she bought a Huawei handset "because it's cheap."

Computers from Lenovo Group and televisions from Hisense are also popular in Japan. But, like the Huawei smartphone customer, most Japanese consumers going for these brands are looking for the least expensive option, according to a home appliance retailer.