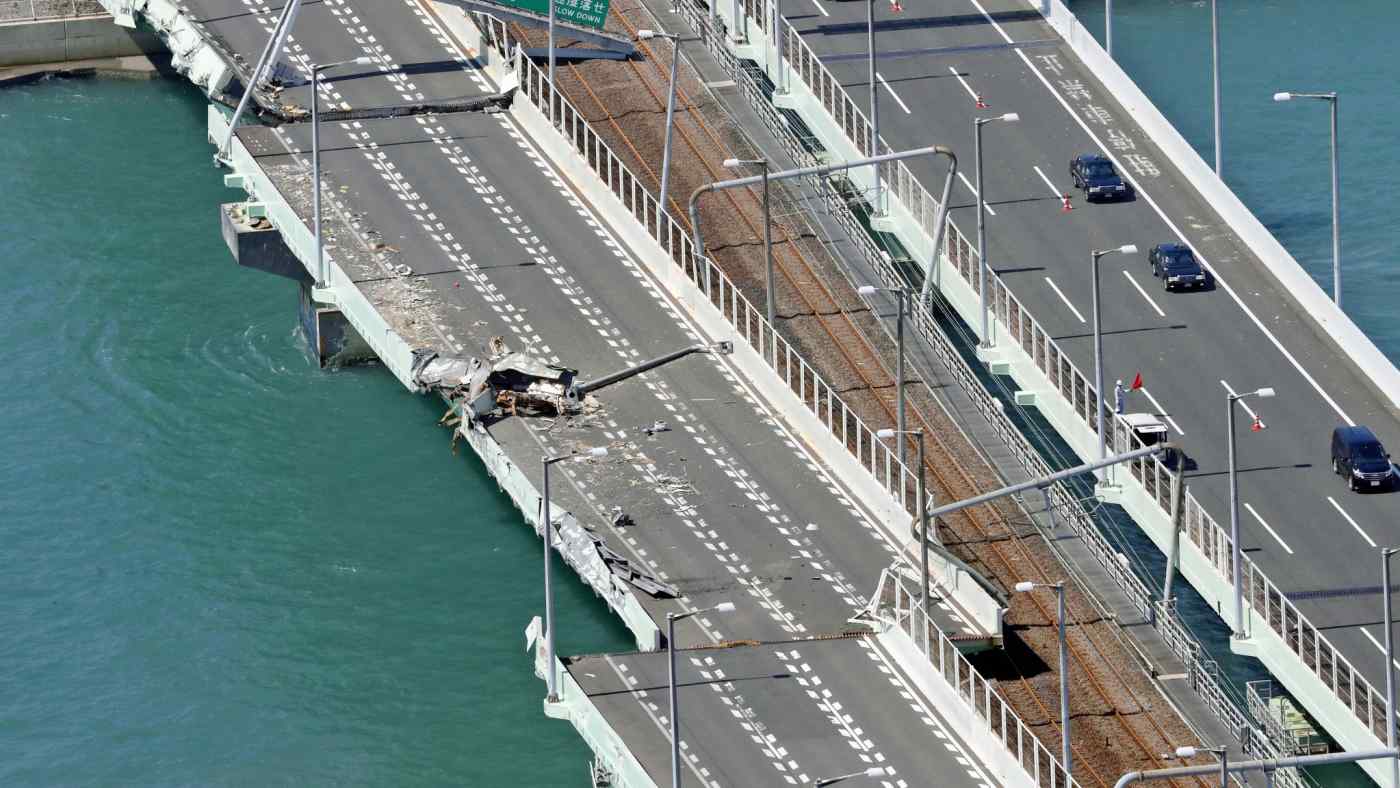 One of the two spans of the access bridge to Kansai Airport was damaged by a drifting tanker.   © Kyodo
ERI SUGIURA and MIO SADAKATA, Nikkei staff writersSeptember 5, 2018 21:44 JSTUpdated on September 6, 2018 05:35 JST | Japan
CopyCopied

TOKYO -- Japan's main gateway for Asian tourists, Kansai International Airport, has remained shut down in the wake of Typhoon Jebi, threatening to disrupt the growing tourism that has been a key engine of the Osaka-area economy.

Foreign tourists were left stranded on Wednesday as airlines scurried to reroute flights away from the flooded airport. The most powerful storm to strike Japan in 25 years has forced many budget airlines flying to the rest of Asia to cancel flights and rearrange bookings.

Though operator Kansai Airports says Runway B -- the runway that was not submerged -- will reopen first, an official could offer no time frame. "Runway A will take more time," the official said of the other runway.

All Nippon Airways suspended sales for all domestic and international flights to and from Kansai Airport through Tuesday.

Kansai Airport is used by about one-quarter of the foreign tourists visiting Japan. It served 28.8 million passengers in fiscal year 2017, up 12% from the previous year. Foreign passengers accounted for nearly 70% of those on international flights, mostly from South Korea, Taiwan and elsewhere in Asia thanks to the airport's proximity. An aerial view of Kansai Airport on its opening day on Sept. 4, 1994. The access bridge is the only link to shore for the man-made island.   © Reuters

But the typhoon exposed the airport's vulnerability, a question since its opening in 1994. One of the most prominent weaknesses of the island airport is the soft foundation on which it was built.

With pillars constructed on a base 18 meters deep, the man-made island has sunken 3.4 meters in the past two and a half decades and continues to drop by 6 cm a year.

To cope with the dangers of high waves, the airport installed 5-meter sea walls in 2004. But the typhoon, which happened to coincide with the high tide, triggered waves that surpassed expectations.

The other obvious weak point is the bridge, the sole means of access to the island. Roughly 8,000 people were forced to stay the night at the airport, stranded after the bridge was struck by a 2,591-ton tanker set adrift by the storm. They were evacuated starting on Wednesday morning by ferries that sailed the 24 km across Osaka Bay.

At this time of year, the airport serves a daily average of 195 international flights, most of which fly to and from other parts of Asia.

"I have an important appointment back in China," said 39-year-old Fang Xiu, who was to return to Beijing on Wednesday afternoon. "I need to go back by any measure." Fang managed to get a seat on a flight from Haneda Airport in Tokyo and was hurrying to Shin-Osaka Station to catch a shinkansen for Tokyo. Japan targets 40 million foreign visitors a year by fiscal 2020. Due to an inbound tourism boom, Japan welcomed nearly 16 million tourists in the first half of this year, up 16% from last year and the highest number on record.

Asia's biggest budget airline, AirAsia Group, canceled a total of 16 flights from Tuesday to Thursday, either arriving or departing from Kansai. The company is offering booking date changes, full airfare refunds and switching of flights connecting to other airports in Japan, including Haneda, Narita near Tokyo and New Chitose in Sapporo.

The airline is accepting reservations connecting through Kansai for Friday and later, but "it will depend on how badly the airport is damaged, as we are still not sure of the precise situation of the sites under water," communications manager Motoi Sasaki said.

Australia-based Jetstar canceled a total of 26 flights on Wednesday. Passengers on flights scheduled for Thursday and Friday will transfer to a similar flight departing within 14 days or receive a fare refund.

Singapore's Scoot canceled 14 flights from Tuesday to Thursday, affecting 3,500 passengers. The company offers service between Singapore and Honolulu in Hawaii with a stopover in Kansai, but this route will operate as a direct flight on Thursday.

Foreigners comprise 70% of passengers on budget airline Peach Aviation, which grounded all of its flights from the Osaka airport. The number of visitors to Japan will decline should the cancellations continue.

Budget carrier Air Busan, which operates between Kansai Airport and South Korean cities like Busan, is also rushing to respond by rerouting its flights there to Chubu Centrair International Airport, which serves the Nagoya area.

The effects on trade are becoming apparent as well. Last year, electronic components such as semiconductors accounted for one-fifth of the 5.64 trillion yen ($50.5 billion) in goods exported through Kansai Airport. Kyoto-based chipmaker Rohm will use Narita, Haneda and Chubu starting Thursday instead. Renesas Electronics, Toshiba Memory and Panasonic also are searching for alternative airports.

Companies reliant on inbound tourism were hit hard on the Japanese stock market Wednesday. Shares for Nankai Electric Railway, operator of a train line to the airport, fell 4% from the previous day. Cosmetics maker Fancl plummeted 10%.

Consumption from inbound visitors in 2017 brought about 800 billion yen in economic benefits to the Kansai area, a 20% increase from the previous year and 1% of its gross domestic product, according to the Asia Pacific Institute of Research. The region could lose 50 billion yen to 60 billion yen if the airport is closed for a month.