Cool Japan and other state-backed funds hit by huge losses

Poor management identified as a key cause for underwhelming performance Some of Japan's major public-private funds like Cool Japan and A-Five are struggling to make up losses on their investments. (Source photos by Kyodo and screenshot of A-Five website)
HISAO KODACHI, Nikkei staff writerOctober 12, 2019 17:57 JST | Japan
CopyCopied

In May, his company raised 600 million yen ($5.56 million) in a private placement with venture capital along with money from A-Five, a public-private investment fund that receives monies from the agriculture ministry. But one of Ono's investors was worried, claiming that A-Five knows little about farming and has a reputation for interfering with the companies in which it invests.

Ono had to assure the anxious investor that the government had started pushing funds to reform and that there was little to worry about.

A-Five is one of several entities that pools funds from the government and the private sector to invest in startups. Four of these entities, including the well-known Cool Japan Fund, are facing mounting losses.

Cumulative losses of the four reached 36.7 billion yen in the fiscal year ended March 2019, a 60% increase from the previous year. If their investments fail, the government has to eat the losses -- not an appealing prospect considering the massive budget deficit that Tokyo already faces.

Total outstanding investment by public-private funds in Japan stood at 748.5 billion yen as of last March. Some funds are seeing their investments flourish while others see their deals die on the vine. 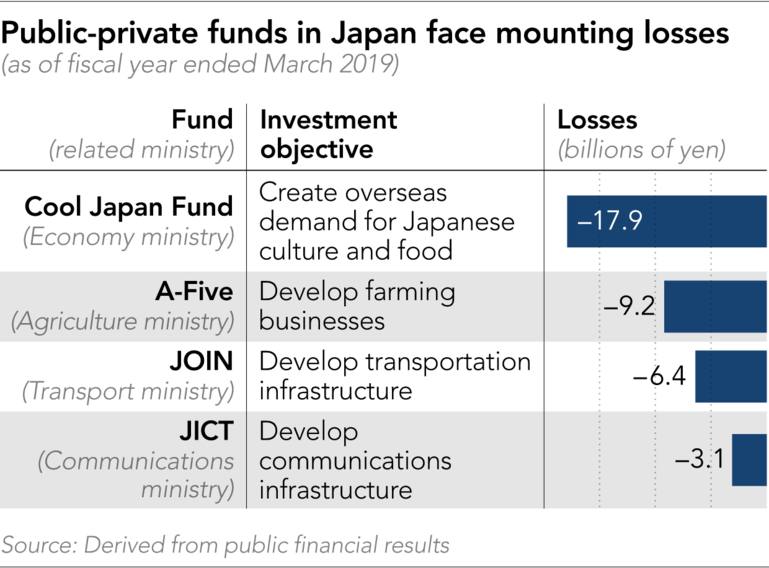 One issue at play is the lack of expertise among fund managers, as is the case with A-Five. Some have little knowledge of the industries in which they invest, while others take too many risks with the companies they back.

Another problem is the lack of good investment opportunities. A-Five was established to encourage the agriculture and fisheries sectors to expand into food processing and sales, but it found few viable deals. The fund was later permitted to invest in other areas of these sectors.

Not all government-backed funds are in such dire straits. Singapore's Temasek is ramping up its investment in startups, with its average 10-year return on yield standing at a healthy 9%.

Japan's Finance Ministry, which overseas the distribution of monies to the funds, is leaning on managers to improve profitability. Some submitted plans at the start of the fiscal year in April with the aim of eliminating losses over the next decade or so.

But the only way these funds can turn a profit is to ramp up spending. A-Five plans to invest an additional 11 billion yen this fiscal year, a ninefold increase over 2018. Cool Japan will spend 40 billion yen more in fiscal 2020, a 120% increase from its planned 2019 spending.

But increasing investment is risky. Public-private funds exist to grow business in areas that solely private capital shuns. The current track record of the four aforementioned funds, however, speaks for itself. If they do not change their ways, the hole they are in will only get deeper.

On the other hand, if the funds boost investment in more profitable, less risky ventures, they will be criticized for crowding out private investment, according to Masahiro Nishikawa, chief fiscal policy analyst at Nomura Securities in Tokyo.

"Investments that are likely to show a profit should be left to the private sector," Nishikawa said. "Public-private funds need to focus on deals that are too risky for purely private capital."

One challenge for the funds is ensuring consistent management over the duration of an investment. If there is too much staff turnover, a deal could tank due to a new manager's inexperience or unfamiliarity with it.

Among the investment deals for all public-private funds in Japan, about 60% run for five to six years, 20% for eight to 10 years, and 10% exceed 10 years.