Teleworking in Japan: The more flexible companies are during the coronavirus outbreak, the better chance they have of retaining valued employees in the long run, experts say. (Photo by Kosaku Mimura)
ERI SUGIURA, Nikkei staff writerMay 12, 2020 12:00 JST | Japan
CopyCopied

TOKYO -- Japanese companies have stumbled upon a possible solution to their chronic labor shortages as measures introduced to contain the spread of the novel coronavirus are also keeping workers happier and more engaged.

Companies that have adopted teleworking and other special workings arrangements during the outbreak have seen a sharp rise in employee satisfaction, according to a recent survey, and experts believe that managers who fail to "be aligned with the new normal" will have a hard time hiring and keeping talent.

Expectation of a long-term labor shortage is a major concern for Japanese companies, particularly for small and midsize ones, which account for more than 99% of the country's businesses.

"Any company who tries to reset entirely to the same system as before COVID-19 will really struggle with employee engagement," Yoko Nakada, head of Japan business group at Lewis Silkin, a London-based law firm specializing in human resources, told the Nikkei Asian Review. "I think they will put themselves at risk of even losing key talent," she said, arguing that telework is "now going to be the new normal globally."

"How flexible employers are able to meet [workstyle] requirements of talented staff is going to define how likely you are to keep talented staff," Nakada added.

Robert Walters Japan, the Japanese subsidiary of the London-based recruitment agency, found that the timing of introducing flexible workstyles has had a significant impact on employee engagement.

Introducing work arrangements for employees in response to the pandemic shows "how a company values its people and places its employees' health and wellbeing as a top priority," said Shigeki Yaginuma, marketing director at Robert Walters Japan who compiled the survey.

According to survey results released late April, 32% of employees working at companies that introduced work from home or flexible hours before the beginning of March answered that they were "very satisfied," while the figure decreased to 15% among employees of companies who introduced such measures in mid-March or later.

Japan experienced a surge of infections from the end of March, with cases exceeding 100 in a single day for the first time on March 27. Prime Minister Shinzo Abe declared the state of emergency on April 7 initially for seven prefectures including Tokyo, but later expanded its coverage nationwide and extended the period until May 31.

Robert Walters' Yaginuma also said companies' investment in the digital infrastructure that enabled them to introduce remote work quckly reflected "a forward-thinking mindset," another facet of corporate culture that could lure employees.

In a country where the population is steadily falling, increasing employee satisfaction and engagement is key, especially for small and midsize enterprises, which often have more trouble hiring than their bigger counterparts. According to the Ministry of Health, Labor and Welfare, the number of jobs opening surged among companies with less than 29 employees, hitting 7.39 million in 2019, more than double what it was a decade ago. The number of opening rose only gradually for companies with fewer than 499 employees and was unchanged for companies with over 500 employees.

A survey conducted by the Ministry of the Small and Medium Enterprise Agency in 2017 found that 73.7% of small and midsize enterprises felt short-staffed, with 75.6% of those saying they faced challenges in hiring. 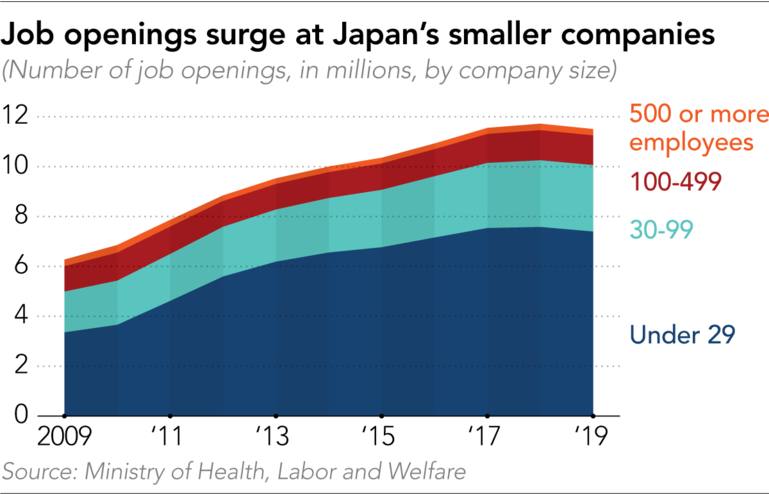 While some companies are cautious about allowing employees to work from home due to concerns about data security and a lack of supervision, those that have offered flexible workstyles are already reaping the benefits. Ryuken, a system engineering company in the northern island of Hokkaido, is one of them.

The company began allowing all 65 of its employees to work from home after Hokkaido Gov. Naomichi Suzuki announced a state of emergency on Feb. 28. While the prefecture lifted the declaration after three weeks, the number of infected cases surged as the second wave of spread and Hokkaido is now included in the 13 prefectures, along with Tokyo, designated as needing "special caution."

Ryuken already introduced telework on a limited basis in 2017, after receiving a proposal from an employee who took a maternity leave. The company was thus able to react quickly to the pandemic, as it already had the necessary work regulations and security measures in place, said Kaname Kawamura, senior managing director of Ryuken.

"Employee benefits including flexible workstyle are very valuable when it comes to talent acquisition for us, as we have lower brand recognition and pay compared to large corporations," Kawamura said, adding that the company has had more female job applicants since the introduction of telework.

While Kawamura believes commuting to work will once again become the norm for the company after the pandemic subsides, "Teleworking will be a tool for employees to continue to work for the company for a long time," by helping them balance work with personal circumstances, such as raising children, caring for elderly relatives or undergoing medical treatment, as well as when their spouses are transferred to a different city for work.

"Those [companies] with a smaller budget will need to be creative in the way they can hire and retain talent," said Nakada from Lewis Silkin.

Nakada predicts that Japanese businesses will predominantly go back to work in the office after the pandemic, while incorporating some amount of working from home.

Talented employees will have learned more about working from home during this time and whether they want that going forward, she said. "If they do, they'll ask for it, and employers who will be able to meet their needs will do better with acquiring and retaining talent."