Outlays estimated at $176bn, driven by electric vehicles and construction TOKYO -- Japanese companies anticipate capital expenditures going up by the most in nearly four decades this financial year amid heavy outlays in technology and real estate, a Development Bank of Japan survey shows.

Domestic investment is on course to rise 21.6% to 19.75 trillion yen ($177 billion) for fiscal 2018, the DBJ reported Wednesday. That represents the strongest spending growth estimate since fiscal 1980, and a seventh straight year of projected gains.

Automakers are pouring funds into electric vehicles, and the fervor has spilled into an array of peripheral industries, such as chemicals and machinery. Ongoing urban redevelopment projects are also driving the historic rise in spending.

The spending estimates in the survey tend to run high. The fiscal 2017 edition projected an 11.2% jump, but actual spending inched up only 2.3%, due to modified plans and construction delays. But based on past results, capital expenditures this fiscal year could realistically grow by 10%, the most since the 14.9% growth logged in fiscal 1990, at the height of Japan's economic bubble.

The latest survey shows manufacturers boosting capital expenditures by 27.2%. This is due in large part to investment and research and development outlays for electric vehicles, on top of redesigns. Extending ranges for electric autos requires development of better batteries and other onboard components. On that front, chemical and electric machinery makers are expected to step up their own investments. 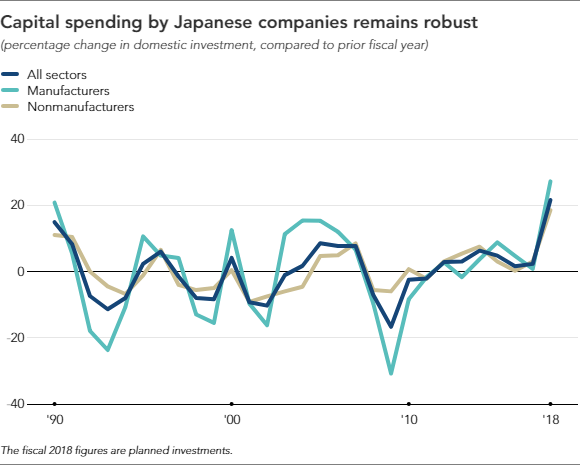 For the nonmanufacturing sector, spending is forecast to rise 18.5%. In addition to urban construction projects, contractors are building massive logistics centers to handle a surge in online orders. Construction starts for hotels remain high ahead of the 2020 Tokyo Olympics.

For the first time in its survey, the DBJ asked companies about the impact of labor shortages. About 60% of nonmanufacturers said a lack of workers is hindering business development. Furthermore, they see the situation growing worse three years down the road. The DBJ expects this to drive more labor-saving investments among retailers and wholesalers.

Overseas capital expenditures are expected to grow 19.1% among all companies. Manufacturers predict a 21.2% gain, with businesses in the transport machinery, electrical machinery and general machinery sectors foreseeing double-digit increases. Among nonmanufacturers, spending abroad is forecast to climb 10.9% as more funds are invested in real estate.

The DBJ survey through the end of June reached out to 3,240 companies with market capitalizations of at least 1 billion yen, with 2,059 companies responding.