Government urged to tighten oversight amid fears over excessive borrowing JAKARTA -- The debt of Indonesia's four major listed state-owned construction companies jumped 57% by the end of 2017 from a year earlier to 156.2 trillion rupiah ($11.3 billion), raising alarm about excessive borrowing to fund the government's infrastructure push.

The combined revenue of the contractors -- Wijaya Karya, Waskita Karya, Pembangunan Perumahan and Adhi Karya -- also surged by 61% to 108.05 trillion rupiah as orders flooded in for building roads, railways and power plants, among other projects.

But part of that growth comes from the contractors' own debt-funded projects, which the government pays for only once they are completed. This is raising risks that lenders and minority shareholders may be burned if the projects turn sour.

With a tight state budget and slow disbursement of government funds, Indonesian President Joko Widodo has relied on companies' ability to fund his ambitious infrastructure development plan. This approach, which many analysts have described as "unprecedented," has turned the previously small and easily managed state-owned construction industry into a behemoth that is moving quickly but also taking on much more risk. 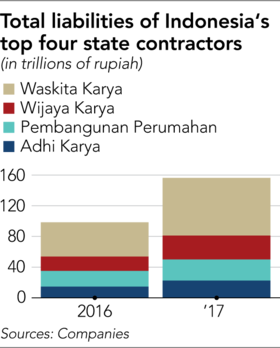 Jean said 20 of Indonesia's biggest SOEs needed one year of profits to repay their debts in 2011, but that figure grew to five years in 2017. "Government oversight will become an increasing focus for us."For some companies, rising interest payments have started to eat into their bottom line. Bahana Securities said Wijaya Karya's fourth-quarter earnings missed expectations due to "higher-than-expected financing costs and taxes." The company, which is the main contractor for the China-backed Jakarta-Bandung high-speed railway, racked up a debt of 31.05 trillion rupiah at the end of 2017, compared to 18.62 trillion rupiah a year earlier.Waskita Karya, which plays a key role in funding and building a toll road network across Java, reported the highest debt of the group at 75.14 trillion rupiah. Despite the surge, the combined debt of SOE contractors is equal to only about 3% of outstanding loans in the domestic banking sector. In order to diversify funding sources, state contractors have ventured into new debt instruments, such as rupiah-denominated bonds sold overseas, known as Komodo bonds. In addition, the government has promised to open up more sectors to foreign investors, and to sell some SOE-led projects to the private sector.

Still, the ballooning debt raises the stake for the government in completing the projects. In February, it was forced to suspend elevated construction work after a string of accidents at projects handled by state contractors. Most of those projects have since been evaluated and allowed to resume, but the mishaps exposed the pitfalls of the SOE-led infrastructure drive.