In regional shift, migrants and money flow into Asia SHENZHEN/CHANTHABURI, Thailand/MUMBAI/TOKYO -- Laurent Le Pen, 36, was assigned to Shenzhen as an engineer by a French telecommunications company in 2007. He initially regarded the city in Guangdong Province as merely another emerging metropolis in Asia, but he soon found himself captivated by its energy and speed.

Inspired by Shenzhen's dynamism, Le Pen quit the French company in 2013 to launch his own business selling mobile devices that monitored the health and safety of elderly people.

In 2016, Le Pen founded another health technology company, this time based around a sonic toothbrush that sends data to a smartphone app, which then gives users specific recommendations for improving their dental hygiene. The new company has sold 500,000 toothbrushes in 70 countries and regions. Le Pen plans to double his sales to 1 million this year.

While the development of a mobile device in France can take a year, it can be done in less than six months in China, Le Pen said. "So you can go two times faster," he said. "That's Shenzhen speed."

He is not the only Western entrepreneur attracted to the energy in Shenzhen, which is increasingly challenging Silicon Valley as home to startups. The city has become a magnet for foreign talent and businesses -- including Apple, which set up a research and development base in the city in 2017.

In 1980, Shenzhen became China's first special economic zone, and ever since it has been one of the great beneficiaries of the country's reform and open-door policies. In addition to technology giants like Apple, Tencent Holdings and Huawei Technologies, the city has an estimated 1.7 million small and midsize high-tech companies. As an entrepreneur, Laurent Le Pen has been inspired by Shenzhen’s energy. (Photo by Takashi Kawakami)

Silicon Valley has "many smart people around" but "you are much faster in Shenzhen," Le Pen said. "It's much easier to do [business] in Shenzhen than anywhere else in the world."

But Shenzhen is hardly alone in attracting entrepreneurs to Asia.

According to the United Nations, the number of immigrants in Asia grew by over 20% from 2010 to 2017, double the rate for Europe. The migrant population in Asia reached 79.6 million in 2017 -- almost 40% more than that of North America.

"Thirty years ago, the model [in Asia] was export-led growth. So you had all these countries that ... just produced and exported to the west," said Valerie Mercer-Blackman, senior economist at the Asian Development Bank. "That's really changing now." This flow of intercontinental travelers such as Le Pen, alongside those who move within Asia, is adding to the region's dynamism.

During the Age of Exploration from the 15th century through the 17th century, Europeans moved to Asia to exploit local resources and colonize nations in the region. In the 20th century, Asians migrated to the U.S. and Europe to pursue affluence.

Now some of that flow is being redirected to Asia. Many ambitious entrepreneurs are attracted to cities in emerging Asian countries, where they see lucrative opportunities in using digital technology to make up for gaps in existing infrastructure.

Ron Hose, a 40-year-old American who was a venture capitalist in Silicon Valley, is one of them. He moved to Manila in 2012 to launch a mobile payment and international remittance service after learning that many people in the Philippines do not have bank accounts. As of 2017, 77% of Filipinos remain unbanked.

"There's pain across the ecosystem," he said. "Where there's pain, there's opportunity." With the smartphone-based payment and remittance services, Hose is tapping into demand from Filipinos working overseas, who contribute about 10% of the nation's economy.

"The place for innovation is Asia," Hose recalled saying to himself when he moved to Manila.

Greg Moran, 33, who operates a rent-a-car company in India, visited the South Asian country in 2011 for the first time. He was struck by the underdeveloped state of transportation there, noticing several people piling onto a tiny auto rickshaw or even on a single motorcycle. He knew that the time was right to start a mobility business there.

"I really didn't want to miss an opportunity to be the first mover in the huge, high-growth market," Moran said.

He quit business school in the U.S. the next year and moved to Bangalore. By 2013, he had launched India's first organized car rental company.

More than 4 million new cars are sold in India per year. But only 2% of its 1.3-billion-strong population own cars, meaning potential demand for rental car and car-sharing services is strong. And an expanding, more digitally literate population suggests room for new markets in location and payment services apps. 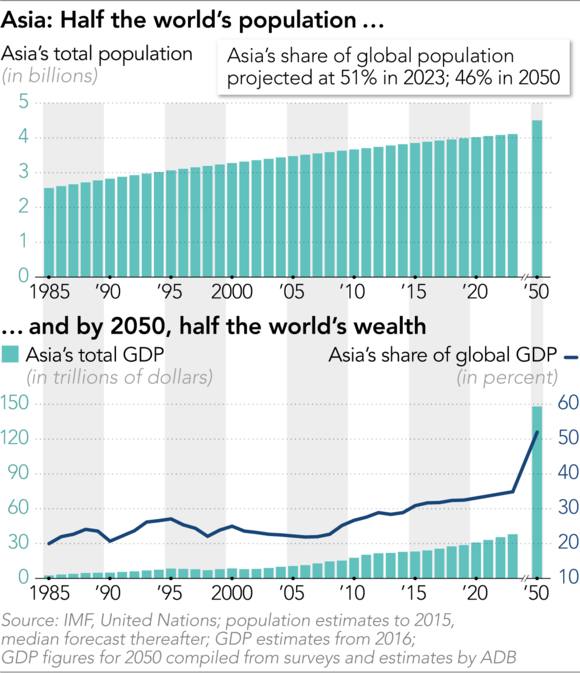 India's business environment is challenging, said Moran, but the opportunities are rich. The country' economy is "growing faster than 6% every year, and welcomes English-speaking foreign entrepreneurs to start new businesses," he said. "There is nowhere else like this on Earth."

The massive inflow of people seeking new opportunities in other countries can cause friction, too. In March 2018, Singapore's then-Manpower Minister Lim Swee Say criticized the presence of "too many foreigners and too much competition for jobs."

The city-state relies on foreigners for about 30% of its workforce. While the government of Singapore has decided to curb the intake of foreign workers to ease popular discontent, the move risks slowing the nation's growth.

At a time when the U.S. and European countries are increasingly inclined toward closed-door policies, some Asian countries -- including Japan, which has begun to accept more foreign workers to compensate for its aging workforce -- are facing questions about their own willingness to accept more people from abroad.

After decades of striving to catch up with the developed world through manufacturing, Asia is becoming a major center of innovation. The primary force behind this transformation is the region's 4 billion consumers -- roughly half of the global population. Asia's crowded cities are at the root of a wide range of urban problems, from pollution to traffic jams, but they are also generating vast amounts of data that power the growth of the digital economy.

In Thailand's Chanthaburi Province, a region known for its tropical fruits, one farmer has tasted the transformative power of the digital revolution spreading across Asia.

For Roong Suparoj, a 61-year-old durian grower, life has changed dramatically in the past several years thanks to Alibaba Group Holding, China's e-commerce behemoth.

Surging exports have tripled the prices of durians produced in Thailand, driving up the farmer's income during the harvesting season in 2018 to about 30 million baht ($945,000).

Alibaba has established a nationwide e-commerce infrastructure that links businesses and consumers across China. That e-commerce empire has made it possible for even small businesses and rural farmers to sell their products to consumers without depending on the traditional large distribution networks controlled by retail giants.

Alibaba is building high-tech logistics centers in such countries as Thailand and Malaysia to bring local products to the vast Chinese market, part of an expansion drive that Ma has called "globalization open to everybody." Jack Ma Yun of Alibaba Group Holding, right, is presented a durian at a signing ceremony in Bangkok in April 2018.   © Reuters

While Alibaba is pursuing its grand plan for global expansion, rapidly-growing social networking platforms are helping individuals in many Asian nations sell their products in ways that, in the past, only established retailers could have achieved.

Some 30 million individual users are selling goods through WeChat, a Chinese messaging and social media platform, while Facebook has become a popular means for retail sales transactions in Thailand and Vietnam. Many such small online retailers are dealing in foreign products.

A 38-year-old retailer in Vietnam uses platforms like Facebook to sell his products, which he says builds a stronger relationship with customers. Because individual credibility in shopping is so important in many Asian countries, social media is an effective way to sell for small retailers in the region.

Users in Southeast Asia spend two to three hours a day on average on communication through Facebook, Twitter and the like, while consumers in China devote two hours to social media activity, according to We Are Social, a British research firm. These figures compare with 48 minutes for Japanese consumers.

Asian countries also occupy many of the top spots on the list of heaviest internet users, led by Thailand, where people spend over nine hours every day on the Web.

Cross-border online shopping has exploded in the Asia-Pacific region in the past few years, according to estimates by Alibaba and Accenture. In 2020, the volume of international transactions over the Internet in the region will be 170% more than in North America and 120% more than Europe, according to forecasts by these firms. As recently as 2014, the figures for the three regions were roughly on the same level.

"Technologies can evolve in an unimaginable way when transferred to places with different economic environments or cultures," says Akiya Nagata, professor of economics at Kyushu University.

Asian millennials, the generation of people in their 20's and 30's who have grown up in a networked society, are raising their collective economic profile as tech-savvy consumers and entrepreneurs.

Ritesh Agarwal, the founder of Oyo Hotels, an Indian chain of budget hotels, is one of the most successful Asian entrepreneurs of the millennial generation. He started the business in 2013 at the age of 19 and has built Oyo into India's largest hotel chain by room count in just two years. Oyo has also become a major hotel chain operator in China, with 500,000 rooms now at home and abroad. This rapid expansion has been driven by Oyo's ability to gather and analyze huge reams of business data.

The hotel chain changes the rates of individual rooms at lightning speed to maximize profits, using artificial-intelligence-based analyses of data for key factors like demand, supply, events and even the weather.

SoftBank Group CEO Masayoshi Son has been impressed by the way the Oyo chain is managed, pointing out that it changes room rates as many as 46 million times per day. Son has lauded Oyo's business model as "hotel management for the new age."

Son has invested in the chain through the SoftBank Vision Fund, his group's 10-trillion-yen investment vehicle. In September, the SoftBank fund led a stunning $800 million fundraising round for Oyo.

Oyo has expanded into Britain and has entered Japan through a joint venture with Yahoo Japan.

The way the chain is taking advantage of cutting-edge information technology born in the West to make inroads into Western industrial nations embodies the innovation -- and ambition -- that is spreading across Asia. 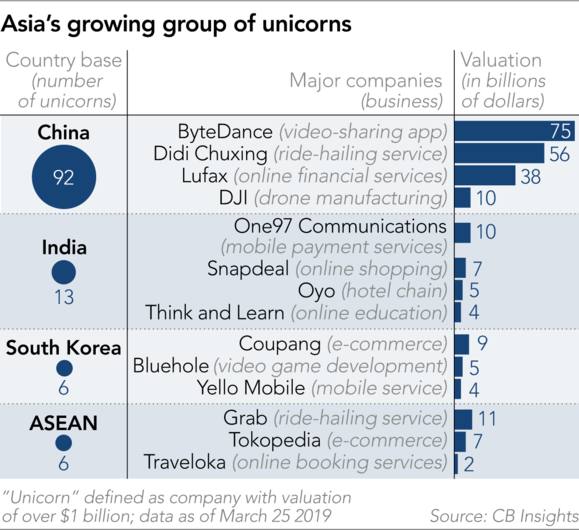 There is plenty of room left to grow. Asia accounts for 50% of the world population and 30% of the world economy. But by 2050, Asia's economic size will grow to account for half the world's total, according to ADB projections. As it narrows the gap, the region's economic face is expected to continue changing rapidly.

"Asian countries contribute about 50%, sometimes more, of global growth," said the ADB's Mercer-Blackman. "[They] are so inserted into all these global value chains." And, as even traditional manufacturing is transformed by automation, "their firms will be able to expand much faster. So that will create more jobs, through expansion and through demand."