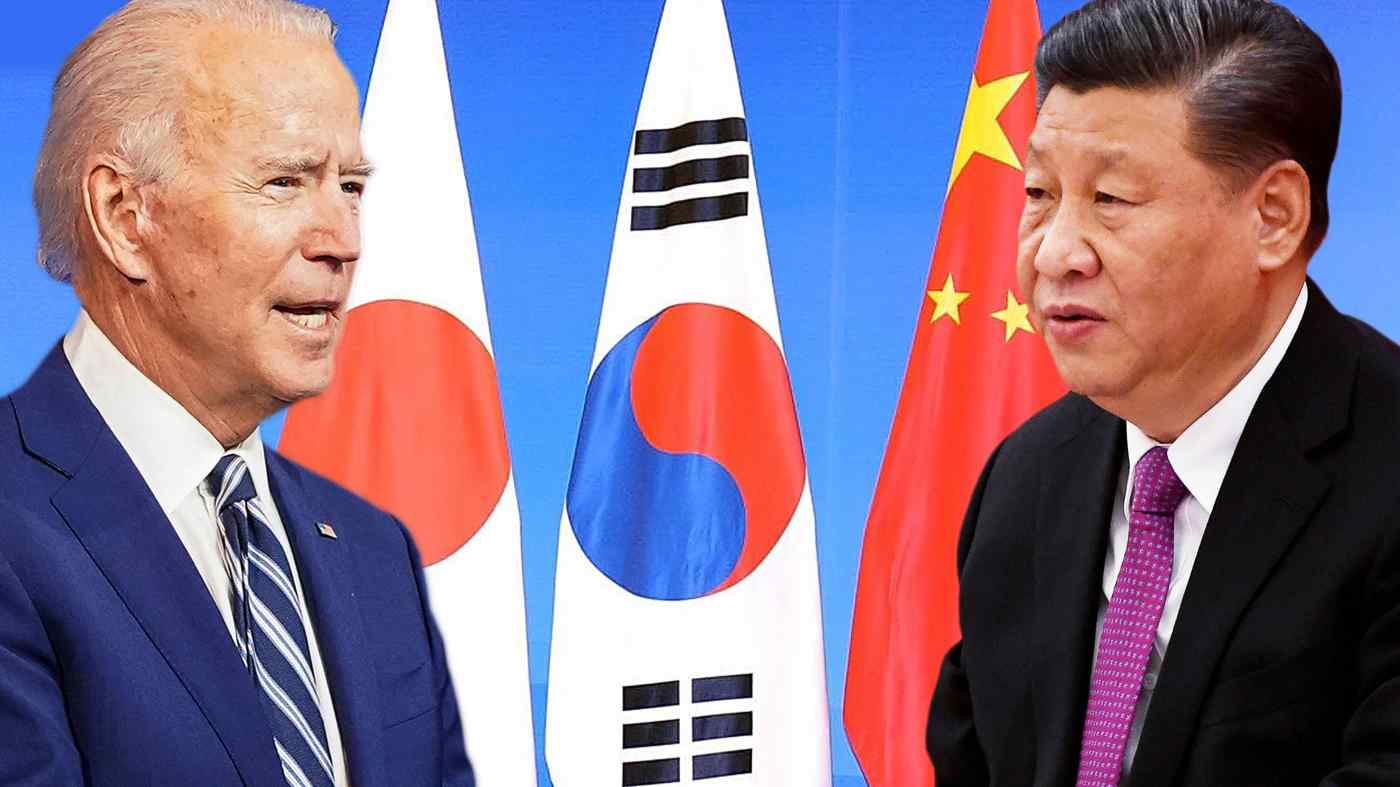 TOKYO -- More than half of business leaders in China and South Korea expect U.S.-China relations to improve under the incoming Joe Biden administration, giving the global economy a lift, according to a recent survey by Nikkei and leading Chinese and South Korean newspapers.

In China, 57% of respondents said the bilateral relationship will improve or greatly improve after Biden takes office as president on Jan. 20, while 51% of South Korean respondents said the same. Japanese business leaders are more pessimistic, with just over 25% expecting an improvement; more than 70% predict bilateral ties will stay the same.

Relations between Washington and Beijing have deteriorated sharply as the Trump administration hit Huawei Technologies and other Chinese companies with sanctions, citing national security risks. More than 60% of those surveyed in each of the three countries said their businesses had been hurt by disrupted supply chains and the fallout from the dispute between the two countries.

Biden, in contrast to Trump, is a multilateralist and has expressed a desire to work with China on international problems such as climate change and the COVID-19 pandemic. But some executives expect Biden to maintain the U.S. government's tough stance on China when it comes to high technology.

The survey was conducted from Dec. 7 to 22 by Nikkei, South Korea's Maeil Business Newspaper and China's Global Times, which is owned by the People's Daily, a mouthpiece of the Chinese Communist Party. A total of 290 top executives, roughly 100 from each country, was surveyed. Executives from Japan, China and South Korea differ in their assessment of how the pandemic will affect their business this year. While nearly 90% of Japanese and around 60% of South Korean managers said the health crisis will likely have a negative or slightly negative effect on their businesses in 2021, roughly 30% of their Chinese counterparts predicted it would have no impact. Another 30% said they expected a positive or slightly positive impact as China's economy recovers from last year's slowdown.

The difference reflects, among other things, the state of the COVID-19 outbreak in the three countries. In China, more executives are optimistic about the business outlook.

"The automobile industry was an engine when economic activity slowed because of the coronavirus," declared Ma Zhenshan, deputy general manager of Volkswagen-China FAW Group sales company, at an industry meeting in December.

China has largely halted the spread of the COVID-19 through lockdowns and other strict measures. At the same time, it took steps to stimulate the economy, such as subsidies for auto purchases. As a result, new car sales rose 12% in November from a year earlier, their eighth consecutive monthly rise. 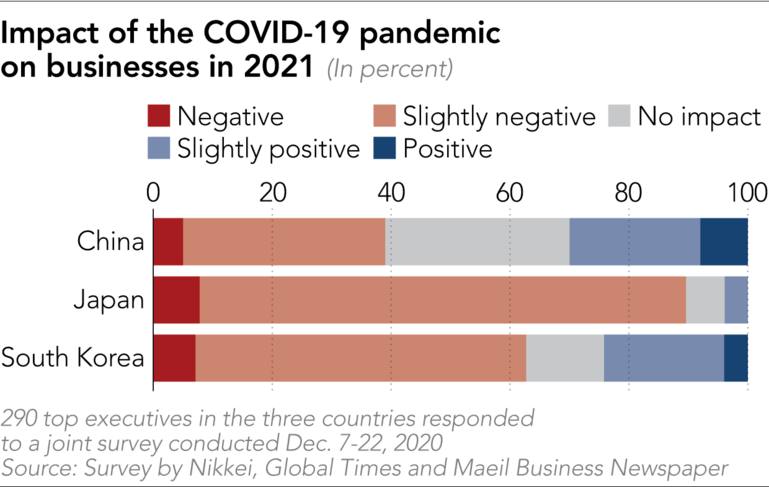 China's economy has bounced back faster than the other two other countries, with its inflation-adjusted gross domestic product rising 3.2% on the year in April to June, and 4.9% the following quarter.

Internet-based services are more widely used in China than in Japan and South Korea. The coronavirus pandemic has accelerated the trend. The growth of internet service companies such as Tencent Holdings, Alibaba Group Holding and JD.com has contributed to China's economic recovery. "We will deepen our innovations while confronting public health, macroeconomic and geopolitical risks," Tencent CEO Ma Huateng said at a session last November.

The tech company posted a net profit of 38.5 billion yuan ($5.9 billion) in the July to September quarter last year, up 90% on the year, as the number of subscribers to its video and music streaming services rose in response to more people spending time at home. The strong result also reflected stronger earnings from online games.

In contrast, Japan and South Korea were hit by new waves of COVID-19, starting in the second half of 2020. The Japanese government recently reimposed a state of emergency in Greater Tokyo. Many Japanese and South Korean companies are stuck in the doldrums.

Regarding the global economic outlook, 53% of Chinese respondents believe the world economy will rapidly recover, while 86% of Japanese and 55% of South Koreans predicted a gradual recovery. The varying pace of the recovery in the three countries may account for the differences. 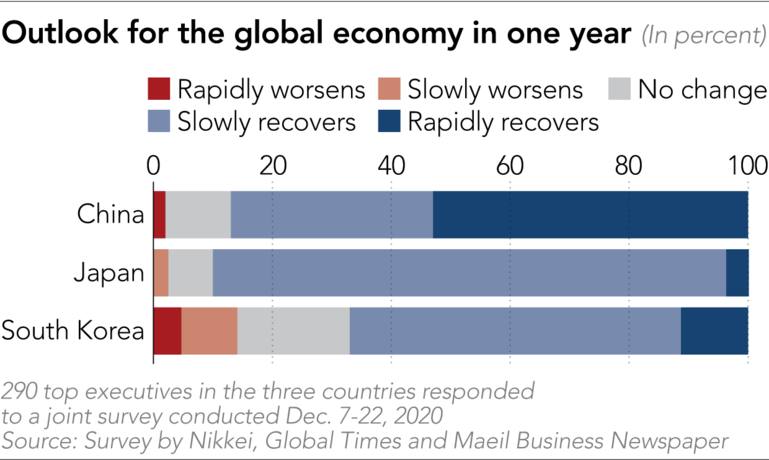 While the survey showed Japanese companies' pessimism over the pandemic, Yasushi Tanaka, a former senior vice president with the Japan International Cooperation Agency, said they "should pay more attention to technological innovations and the development of new markets."

To prevent new infections, 39% of South Korean respondents and 24% of Chinese said more workers will be asked to work from home. The use of online meeting tools offered by Alibaba and other companies has increased sharply in China, while the South Korean government last July announced measures focused on helping companies go digital.

In Japan, there is skepticism about how much work can shift online: Only 9.8% of respondents mentioned an expansion of work from home, while nearly 90% said the status quo will continue. As China and South Korea press ahead with digitization programs to adapt to lifestyle changes brought about by the crisis, calls for a similar effort in Japan are expected to increase.

Asked about plans for capital spending this year, 63% of Chinese business leaders say they plan to boost domestic investment. Around 60% of Japanese and South Korean companies said investment in domestic plant and equipment will level off from the previous year. The finding again mirrors differences in the speed of the recovery in the three countries.

With the pandemic bringing drastic changes to the world economy, Chinese companies are becoming more selective about foreign investment. While 37% say they plan to reduce overseas investment, a plurality of companies surveyed, 38, say they plan to focus their cuts in the U.S. This seems to be a response to the Trump administration's sanctions.

While Japanese and South Korean companies expect to hold both domestic and overseas investment broadly steady, they plan to spend more in Southeast Asia than elsewhere, as the region has been less badly affected by the coronavirus than the U.S. and Europe.

In addition, expectations for medium- and long-term economic growth in Southeast Asia are strong as the Regional Comprehensive Economic Partnership free trade agreement was signed last year by 15 countries, including Japan, China, South Korea and the 10 members states of the Association of Southeast Asian Nations.

Japanese and South Korean companies may consider Southeast Asia an attractive investment destination because the U.S.-China friction is seen as less of a problem in the region.