CAIRO -- In the dusty desert between the Egyptian cities of Cairo and Alexandria, workers are putting finishing touches on a sprawling industrial park intended to house almost 600 Chinese textile and apparel factories.

The China-Egypt Mankai Textile Park in Sadat City would potentially give Chinese companies a base from which to export clothes duty-free into the U.S. and EU, an attractive prospect given rising American tariffs on Chinese imports and increased domestic production costs.

Eyeing a potential 40% to 50% reduction in operating costs, jacket maker Shishi City Fusheng Garment Weaving has budgeted $10 million to shift production for clients in Europe, the Middle East and Africa to Mankai from China next year.

"Egypt is an ideal country for the textile industry," Shi Tianling, who is both chairman of Fusheng and a director of Ningxia Mankai Investment, the park's Chinese developer, told the Nikkei Asian Review.

Shi already started production in Egypt last year for the local market from a rented factory space with 200 workers. "Egypt is close to the EU, and Africa is the continent with the best demographics for the future," he said. 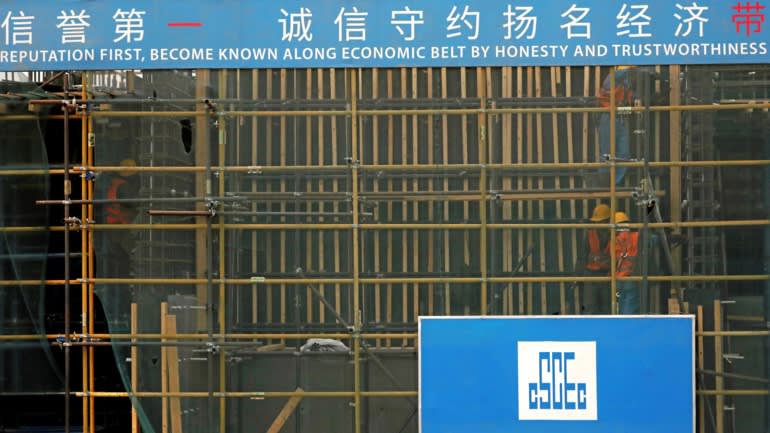 Chinese companies are helping to build a new capital for Egypt, as well as investing in textiles, energy, property and railways.   © Reuters

A number of large Chinese textile and apparel makers are said to be working on their own plans to set up elsewhere in Egypt.

Shandong Ruyi, which now owns high-end Western brands including Bally and Aquascutum, is to put $830 million into spinning and weaving facilities in an older Chinese-backed industrial park east of Cairo, according to Egyptian officials. Huajian Group, a major shoe producer, is said by local officials to be setting up plants in another industrial zone east of Cairo.

Because of the Suez Canal and Egypt's location at the crossroads of trade routes between Europe, Africa and Asia, the country has become a significant node in China's Belt and Road Initiative. Chinese state companies are playing a key role in the development of a new Egyptian capital, also on a site east of Cairo. Other Chinese companies are pursuing investments in energy, property and railways.

Textiles and apparel are already Egypt's biggest exports but the government has ambitious targets to expand output. It remains unclear, however, how many Chinese companies are as committed as Fusheng to using Egypt as a production base.

The Sadat City park, a joint venture between the Egyptian government and recently formed Ningxia Mankai, was originally to open in May with a first group of factories starting up production. While the park itself is largely ready, local officials now talk of machinery and equipment for 140 factories arriving at the park by year-end.

Ningxia Mankai is named for the northern, heavily Muslim inland province of Ningxia that has been designated as China's Belt and Road gateway to the Arab world, but executive Jason Xiong told Nikkei that the company was formed by textile and logistics industry veterans who mostly come from Jiangxi and Guizhou provinces. Xiong said that the Egyptian government has fronted the initial $37 million in development costs.

He said that 70 Chinese companies have committed to the park and that around 20 will begin operations over the summer.

However, four Chinese companies identified by Egyptian officials as investors in Mankai told Nikkei that they in fact had no firm plans. A spokesperson at Shanghai-based Shangtex Holdings, which manufactures industrial textiles, said that its plans are "still in the embryonic stage."

"After an internal inquiry, I can say we do not have such an investment plan," said a Texhong spokesman. "There may be some misunderstanding outside."

Even so, Ningxia Mankai and Egyptian officials are continuing to court potential Chinese tenants.

While in Beijing in April for the Belt and Road Forum for International cooperation, Egyptian President Abdel Fattah al-Sisi met with the chief executive of textile maker Handa Enterprise. Egyptian officials said afterward that Handa had promised to set up a large factory at Mankai, but the company's own statement about the Beijing meetings made no mention of such plans.

Egyptian officials hope that the 3.1 million sq. meter Mankai park can revitalize Sadat City, which has fallen on hard times since late President Anwar Sadat tried to make it the national capital in the late 1970s. The Egyptian Trade and Industry Ministry estimates that Mankai could provide 160,000 jobs once its planned 592 factories are operating at full capacity.

Lower costs for labor, electricity, water and other inputs are seen as key lures for Chinese companies.

"Typical textile worker wages in China could easily be two to four times what they are in Egypt," said Benjamin Cavender, principal at consultancy China Market Research in Shanghai.

Thanks to a free trade agreement with the EU, textiles and apparel can be imported duty free from Egypt and are by far Egypt's top exports to the bloc.

Duty-free access to the U.S., however, is conditional on products being shipped from designated industrial zones and including 10.5% Israeli content, a measure intended to foster regional business partnerships. Textiles and apparel have nonetheless become Egypt's top export to the U.S., with the content requirement usually met through use of imported chemicals, thread, cardboard or zippers. Mankai has already received the relevant zone designation.

"Egypt has strength because of its location," said Jun Han, director of international affairs at trade group China Textile Association. "Regarding Africa, Ethiopia has been the most popular destination for the Chinese but Egypt will offer more opportunities thanks to its geography."

Domestic producers in Egypt have questioned the government's keenness to bring in Chinese manufacturers, worrying they could lose local market share.

"It is all wrong as it will put the national textile industry at stake," said Mahmoud El-Daour, former head of the apparel division at the Cairo Chamber of Commerce. "What we need is a trading city to be a marketplace for local textile production."