Emergency foods in Japan turn up the taste

Once bland meals are now fit for everyday dining, but not everyone is digging in

Emergency food in Japan is getting tastier, but its relatively high cost has kept some consumers away. (Photo courtesy of Sugita Ace)
WATARU SUZUKI, Nikkei staff writerJune 25, 2018 12:17 JST | Japan
CopyCopied

TOKYO -- Even in the world's most earthquake-prone country, many households are ill-prepared to go without food or water for days. But this may change as emergency foods -- long-lasting but typically bland pre-cooked meals -- become tastier.

"Emergency food sounds like something out of the ordinary, but we want to incorporate it into daily life," explains Fumihiro Okada, head of product development at Sugita Ace, a supplier of construction materials.

The company's brand of long-life packaged foods features dishes familiar to Japanese tastes, like oden, a Japanese hot pot, and simmered yellowtail with radish. Dubbed Izameshi -- a combination of the Japanese words "iza," or emergency, and "meshi," or food -- the meals are elegantly packaged in single-portion plastic pouches and sell for between 300 yen and 600 yen ($2.70 to $5.40) each.

According to the U.S. Geological Survey, earthquakes are most frequently detected in Japan. The country was hit by a huge temblor and tsunami in March 2011 that killed some 16,000 people and displaced another 65,000. After the disaster, Japanese started to pay more attention to emergency preparedness.

Still, most people turn their noses up at conventional emergency foods, such as unappealing canned bread. To turn a profit in this niche food industry, producers have to rely on bulk orders from cash-strapped local governments, who usually limit purchases to the least expensive items.

This is why Sugita Ace and other companies are finding ways to tempt finicky households. Despite looking and tasting like normal pre-cooked meals found in supermarkets, most Izameshi products last for three years.

The company's manufacturing process entails heating foods to high temperatures after packaging, killing bacteria that would otherwise cause the food to go bad and preventing new bacteria from forming. While the company can't use certain ingredients, such as spinach, most of its products do not contain chemical seasonings. Since launching in 2014, Izameshi now offers almost 40 different types of food, ranging from white rice and chicken curry to dessert. The company is also planning to launch a lineup of canned udon noodles later this year.

Integrating emergency food into daily menus -- an approach known as rolling stock -- has been advocated by experts like Kazuko Okuda, an honorary professor at Konan Women's University whose home was damaged in the huge earthquake that struck central Japan in 1995.

"The lack of vitamins and minerals in diets after a disaster can lead to death rates higher than those from the disaster itself," she said. "By using emergency food on a daily basis, people can be better prepared and prevent food from going bad."

Reactions to the new emergency foods have been mixed. A Saitama mother in her 40s with two children said she regularly reviews her stock of emergency food, but that "it is very hard to manage expiration dates while maintaining the proper stock and variety of food." She also said that emergency food is "too expensive to eat everyday." 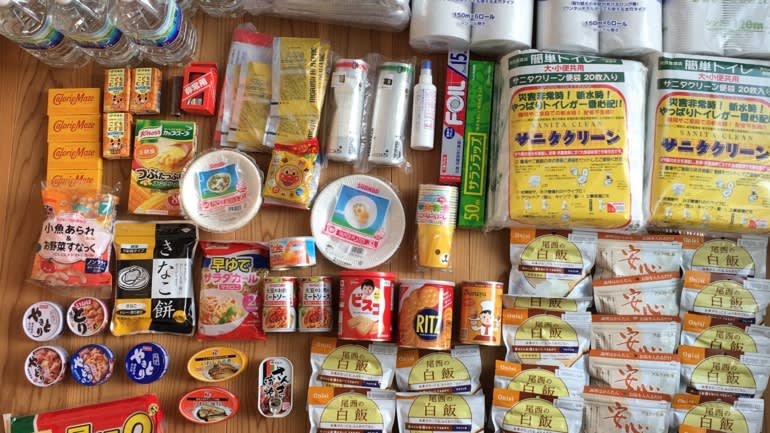 One mother regularly reviews her emergency food, but says it is “very hard” to use it on a daily basis.

Households represent only about a fifth of Japan's 19 billion yen ($171 million) emergency food market, according to research company Fuji Keizai Group. In addition to the difficulty of maintaining supplies, people's urgency to stock up after a large earthquake tends to fade over time. A survey by weather information provider Weathernews showed that about a third of Japanese do not have even a one-day supply of emergency food on hand -- down from 45% before the March 2011 disaster.

Okada admits that it will take years before the business becomes profitable. "We aim to expand our retail channels to supermarkets," he said. Some companies like Onishi Foods, which sells instant dried rice, said they are focused on tapping new customers like schools.

Convincing a broader audience to stock up on emergency food may require the savvy marketing skills of large food companies, many of which remain uninterested in the small and unprofitable sector.

But food major Kagome may be an exception. In 2015, it launched an "emergency food version" of its best-selling vegetable juice with an extended best-before date of five and a half years.

"The interest in emergency food is increasing," said a Kagome spokesman.

Some scientists predict a catastrophic earthquake hitting Japan over the next few decades. A report issued in early June by Japan's Society of Civil Engineers estimated that a new earthquake could cause up to 1,240 trillion yen in damages over 20 years.

Keeping households alert and well-prepared may be key to minimizing the economic consequences of such a disaster.