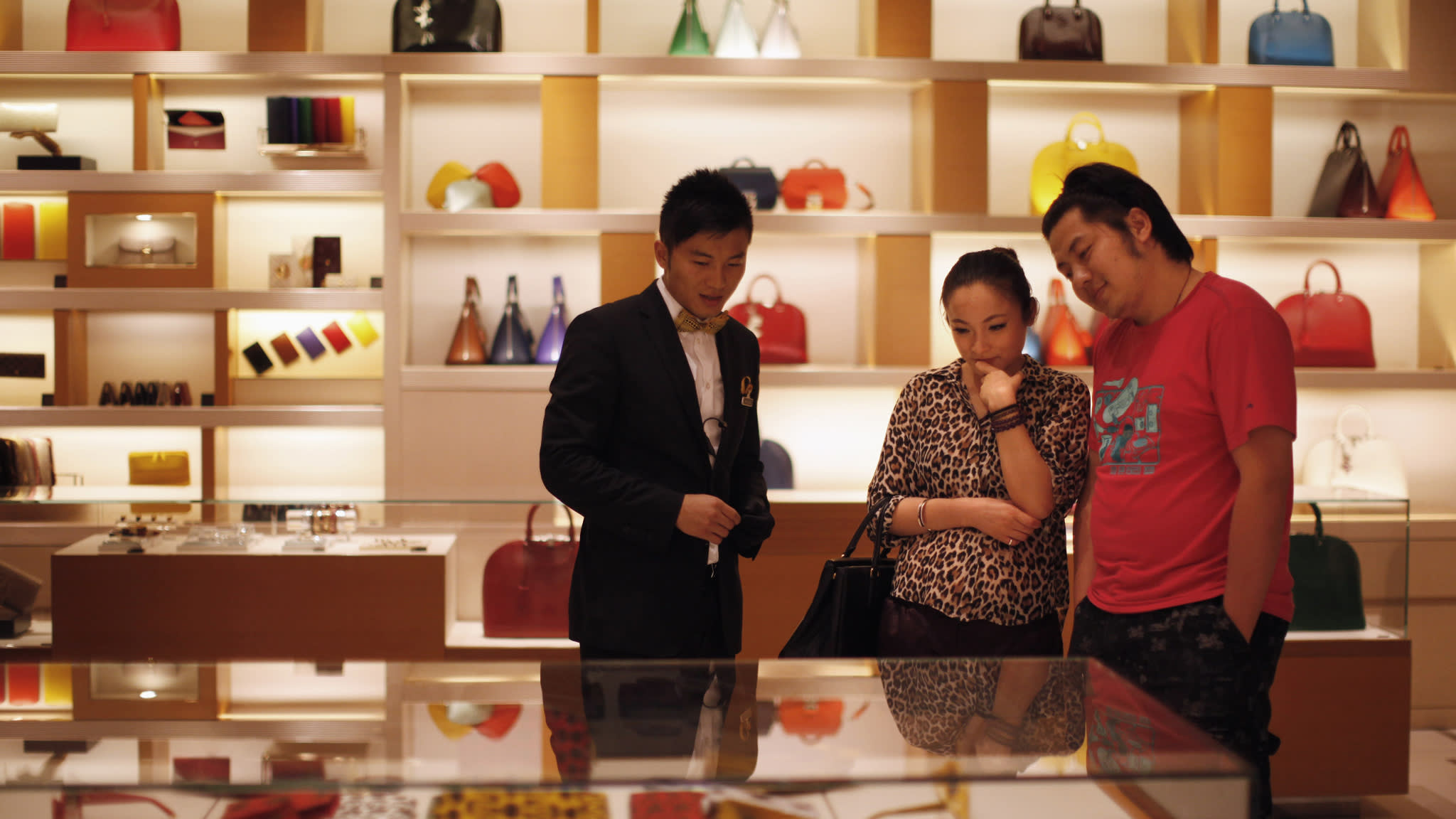 GENEVA -- European luxury brands thrived in the first half of 2018 thanks to brisk demand from affluent Chinese consumers spurred on by a government that sees domestic consumption as crucial to keeping cash in the country.

Net profit at France's LVMH Moet Hennessy Louis Vuitton for the half ended in June jumped 41% on the year to about 3 billion euros ($3.48 billion). Revenue growth was driven by the mainstay fashion and leather goods segment, which logged a 25% in sales, while perfumes, watches and jewelry also sold well.

For both companies, the resurgence of Chinese consumption has made a significant impact. Although President Xi Jinping's push for austerity among the wealthy temporarily cooled purchases of luxury products, the government recently began to encourage the domestic consumption of such goods to prevent capital flight.

"I thought these sneakers were really cute so I bought them right away," said a woman visiting Geneva with her partner on a summer trip to Switzerland and France earlier this month. "I often go to these stores with my friends in China, too."

But luxury brands have learned from prior earnings collapses not to be overly dependent on China. They have been successful at targeting young and ethically conscious shoppers to reduce their reliance on the country given its trade row with the U.S.

Kering's Balenciaga brand is designing a street fashion line with a younger generation in mind. Its thick-soled Triple S sneaker, for example, is a hit. Millennials, defined as the generation born after the 1980s, currently account for 60% of total sales.

LVMH is also expanding its lineup of products for young shoppers, such as luxury sneakers and Louis Vuitton iPhone cases. In addition, the Paris-based luxury goods group has bolstered its presence online, launching a shopping site for its brands last year.

In Europe and the U.S., more consumers are choosing products that address environmental or social issues. Swiss brand Richemont, for instance, has released watches made of easily recyclable materials, forgoing rare materials and precious metals in an effort to tap into demand for ethical goods.

Top brands are not straying from the luxury path, said Rene Weber, a watch analyst at Switzerland's Bank Vontobel, but are instead meeting the needs of consumers who want to try new products.

As part of its diversification strategy, Britain's Burberry has set its sights on the LGBT community. At a London fashion show in February, it unveiled a collection of products with rainbow coloring, a symbol of the movement, running through the brand's signature plaid design.

Although luxury brands are responding to consumers' needs, there is little optimism about future earnings amid growing concern over the U.S.-China trade war. Consumption of luxury goods could drop if Chinese demand recedes again or the global economy slows.

LVMH has yet to see negative effects from the trade spat, but Chief Financial Officer Jean-Jacques Guiony told Bloomberg that "the current trends cannot realistically be extrapolated to the second half of the year."

Kering CFO Jean Marc-Duplaix, meanwhile, said he was very worried about the trade dispute at an earnings briefing.