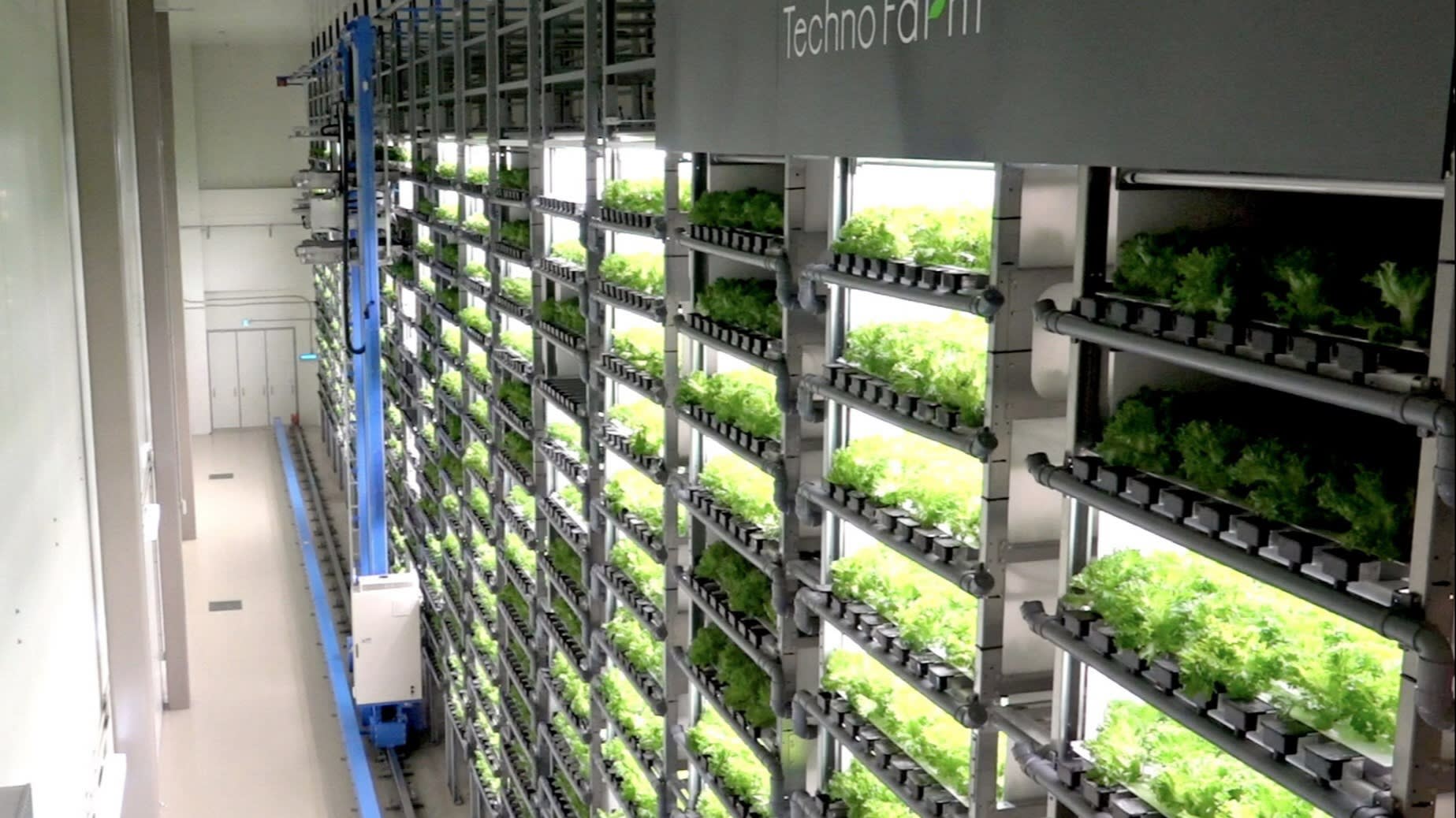 TOKYO -- Lettuce and other vegetables grown in plant factories have become a hot commodity in Japan, as consumers fearful of contracting the coronavirus seek out foods that were raised in sanitary environments and prepackaged before hitting stores.

Those vegetables are pricier than conventionally grown varieties, but their prices have come down. And the factories' ability to maintain consistent quality and stable production volume has added to their appeal as the pandemic disrupts food imports.

Supermarket operator Kidaya Shoten in Urayasu, Chiba Prefecture, set up its first vegetable factory seven years ago, with its three facilities now producing 34,000 heads of lettuce and other products a day.

Vegetable orders from restaurants have fallen at Kidaya amid the pandemic. But its online retail sales of vegetables doubled in April and May, while shipments to supermarkets increased 20%.

Kidaya's pesticide-free lettuce comes in relatively small packages that are popular with customers who live alone. "People are also liking that they are individually packaged" for hygienic reasons, especially amid the pandemic, the company said.

At 128 yen ($1.20) per 80-gram bag, Kidaya's lettuce is on the cheaper end of factory-grown vegetables. It is more expensive than conventionally grown lettuce, which could go for as little as 20 yen for the same amount, but is gaining more interest thanks to consistent quality and volume.

Japan had 386 plant factories nationwide as of February, according to the Japan Greenhouse Horticulture Association. Many of them are smaller, experimental facilities with overly sophisticated equipment, and 40% are in the red.

But "we are starting to see signs that businesses are turning a profit," said Yasufumi Miwa at the Japan Research Institute.

Companies have built up know-how over the years that helps them cut costs and scale up. Kidaya has increased its productivity since figuring out the right intensity of grow lights. Energy-saving LED lights have become cheaper as well.

Kyoto-based Spread brought its second lettuce factory online in 2018. It is one of the world's largest such facilities with a daily output of 30,000 heads, and is 70% automated.

The suggested retail price for Spread's lettuce is 158 yen, about 40% less than in 2008. The company is now working with Nippon Telegraph & Telephone to conduct an artificial intelligence analysis of collected data to further bring down the price.

Spread has also adopted a franchise model for its vegetable factories, and is assisting oil distributor Eneos build a facility by the end of 2020.

Meanwhile, Plants Laboratory offers a cheap, largely plastic factory system that costs a third of conventional vegetable factories, developed jointly with the University of Tokyo. Its factories are now being used at certain locations of Walmart-owned supermarket chain Seiyu. It is also working with East Japan Railway to grow food under elevated rail tracks.

There is a compelling reason for Japan to increase plant factories.

Those facilities can guarantee consistent output regardless of weather and with limited manpower and space, helping to bolster Japan's food sufficiency. The country produces less than 40% of the food it consumes, and its farming population had shrunk 35% in the five years to 2019 -- bringing the average age of the Japanese farmer to 67 years old.

The coronavirus exposed further issues with current supply chains after vegetable shipments from China froze, and the foreign interns many Japanese farmers rely on for labor were unable to leave their countries.

Factory-grown vegetables are seen attracting more demand not only for retail but for commercial uses as well, because they tend to be uniform in size and do not need to be washed for dirt and germs. Restaurants and convenience stores can start using factory-grown lettuce in their salads, for example.

Plant factories were responsible for about 3%, or 17,000 tons, of all lettuce shipped in Japan in 2019, according to research company Fuji Keizai. They are expected to top 10% of the market around 2030.