PHNOM PENH/YANGON -- Clothing brand Esprit says it will no longer source from a garment factory located in an industrial park linked to Myanmar's military in a recent United Nations report, while other brands -- including H&M and Bestseller -- say they will look into the situation.

Supplier lists disclosed by clothing companies and reviewed by the Nikkei Asian Review revealed several well-known brands sourcing from factories inside two industrial zones that, according to the U.N, are owned by military conglomerate Myanmar Economic Holdings Ltd. (MEHL).

The FFM report, released earlier this month, detailed an extensive business empire controlled by Myanmar's military, known as the Tatmadaw, which has carried out a brutal crackdown against the country's Rohingya Muslims.

Revenue from the vast empire -- which spans from construction, gem extraction and insurance to tourism, banking and manufacturing -- enabled the military to avoid accountability and provided financial support for operations linked to human rights violations, the report's authors wrote.

The U.N. has urged international companies to cut ties with military-linked businesses. Among those sourcing from factories within MEHL-owned industrial zones in Yangon -- specifically the Ngwe Pinlae Industrial Zone and Pyinmabin Industrial Zone -- were Next, Bestseller, H&M, Marks & Spencer, C&A and Esprit.

Hong Kong-listed Esprit told Nikkei it has investigated its supply chain and will sever ties with the factory inside Ngwe Pinlae from which it sources, Perfect Gains Garment Manufacturing.

"Esprit will be taking immediate action by stopping all future orders made to the Perfect Gains factory in Myanmar," the company wrote in an email, saying it was previously unaware of the military link. "Esprit will continue to closely monitor this concerning situation."

H&M said it would investigate the report's findings. In an email, they also said the company had held recurrent meetings with the Myanmar government during the past two years to stress the "importance and urgency" of following U.N. and European Union recommendations.

"H&M Group takes seriously the matters raised and we are at this moment going through every section of the report to be able to draw any conclusions and determine what actions are necessary and appropriate," the email stated. "We are fully committed to using our influence beyond our formal and legal responsibilities to make sure we respect and promote human rights throughout our business."

BestSeller also said it would look into the report to "assess if we need to take any specific actions due to the findings." C&A and Next did not return requests for comments.

On its list of suppliers, presented in an online map, Marks & Spencer listed a factory in each of the industrial zones. It also listed Myanmar Wise-Pacific Apparel -- the MEHL joint venture -- as a supplier.

It has since cut ties with Wise-Pacific but declined to answer questions about why and when.

"Ethical trading is fundamental to how we make our clothes and all our suppliers must adhere to our Global Sourcing Principles," a spokesperson said in an email response.

"We regularly audit all of the factories we work with across the world, including those in Myanmar. We continue to monitor the market closely both through our conversations with the ETI and our on-the-ground auditing."

Owned and influenced by senior military figures, MEHL and the Myanmar Economic Corp. (MEC) own 120 businesses and have links to at least 27 more "crony companies," the U.N. mission found. 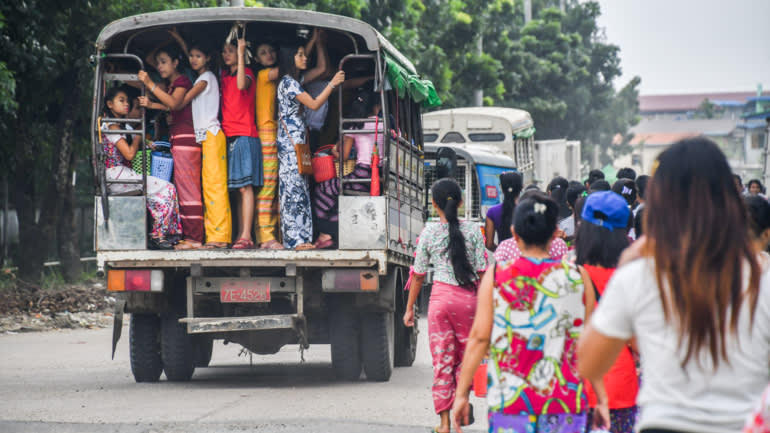 The United Nations is calling on businesses to cut ties with companies linked to Myanmar's military. (Photo by Yuichi Nitta)

This month, Belgian communications company Newtec released a statement saying it had cut ties with Myanmar telco Mytel, which is linked to MEC through its corporate structure, according to the U.N. report.

"Newtec wants to be absolutely clear that we will never knowingly sell to any organization or company linked to the Tatmadaw's campaign of violence across Rakhine state and the atrocities committed against the Rohingya," the company said in a statement.

The U.N. has named both as being responsible for crimes under international law. They have also been sanctioned by the U.S. for their involvement in gross violations of human rights.

The state-backed crackdown on Rohingya drove 700,000 members of the Muslim community to neighboring Bangladesh with a campaign of murder, rape and destruction.

Neither MEHL nor Wise-Pacific responded to requests for comments by the time of publication.