One fast-growing femtech player is Be-A Japan, a startup that sold 60,000 period underwear items up to September after launching the product last year. Sales have "far exceeded our expectations," Chief Operating Officer Kumi Takahashi told Nikkei Asia. The startup raised about 200 million yen ($1.7million) in a seed round in May.

"The femtech industry covers period, menopause, infertility treatment and other areas that have been taboo for open discussions," said Haruka Motohara at venture capital NOW, one of Be-A's investors.

Femtech will grow by creating new markets through new products and services, "and by redefining existing markets such as the hygiene product industry," Motohara said.

For now, investors like NOW are relatively rare in Japan as the business environment and some regulatory hurdles stand in the way of market expansion.

In the U.S., where Takahashi has lived, absorptive period underwear like Be-A's is not new. Thinx, a brand now backed by Kimberly-Clark, was launched in 2013. 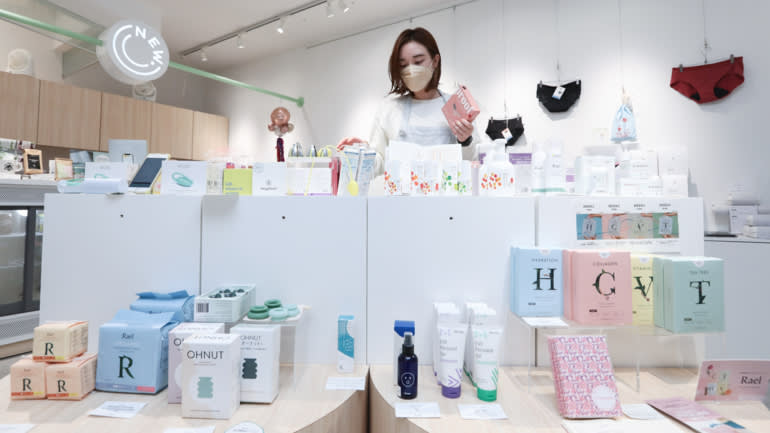 Be-A spent over two years developing its product for Japanese and other Asian markets, which called for better absorption capacity. It partnered with a sewing factory that manufactured underwear for people with weak bladders. The product has been popular with women who have trouble carrying pads around or difficulty changing them at work. They are not cheap, costing 7,590 yen each.

Period underwear hit the Japanese mass market this year when Fast Retailing launched its version under the GU brand. Uniqlo followed in September with a product priced at under 2,000 yen.

Customers often give feedback and make requests on fashion and design to GU.

"With the novel coronavirus pandemic, we had voices saying they wanted femcare-related items," the brand's spokesperson told Nikkei Asia. Some suggested that social distancing and lack of interactions with others have led people to think more about personal comfort.

GU set up the GU Body Lab project this year to focus on female health. MTI, one of its partners, produces the menstrual cycle forecast app Luna Luna.

MTI said it is getting calls from other companies for collaborations due to "something of a femtech boom." The collaborations are also part of the brand's effort to promote its 20th anniversary, said Maaya Hine, Luna Luna's business manager. Increasing interest in femtech comes with the greater attention being given recently to women's health. Japan's industry ministry added the topic to its 2018 guidelines for managing employee well-being.

In July, MTI also entered into a new femtech business partnership with Marubeni.

Unicharm, a Japanese consumer goods company that makes diapers and pads, started offering free seminars on women's health to companies last year. Men and women from over 20 companies attended in 2020, and this year over 50 companies and organizations have applied.

Taboos are being pushed aside. Unicharm initiated the #NoBagForMe campaign in 2019, encouraging women to openly buy and carry sanitary pads. Japanese pharmacies and convenience stores generally wrap such items in opaque bags.

The COVID-19 pandemic put economic strains on some people, and that gave rise to social media campaigns with "period poverty" hashtags that were noticed by politicians and businesses. The FamilyMart convenience chain has discounted pads by 2% until the end of the year.

Hitoshi Watanabe, Unicharm's spokesperson, said that major changes have occurred with open discussions about period issues. "Just a few years ago, there were not many people who talked about them -- or society did not allow them to speak out," he said.

Globally, consultancy Frost and Sullivan predicts that the femtech market could reach $50 billion by 2025. Period underwear, and femtech products in general, "are so convenient that it makes you wonder why they did not exist before," said Be-A's Takahashi. With more female entrepreneurs, femtech is expanding not just in Japan and the U.S. but even in countries like China, she said. Fermata is "creating the environment that enables sales of" femtech products, one of its co-founders says. (Photo by Yuki Kohara)

The COVID-19 pandemic has created a nurturing environment for femtech, according to Fristene Whang, chief marketing officer at Singapore-based Ferne Health. The company provides at-home health consulting and screening services via its online platform, including for sexually transmitted diseases, and for hormone and fertility issues. "Everything is becoming e-commerce based, so definitely there is a gap to fill," she said.

Founded early last year, Ferne works with doctors from the Health Advisory Clinic and other local clinics. It has had about 5,000 customers, counting repeat users, so far, mainly in their 20s to 40s.

In Southeast Asia, Singapore is the main femtech businesses hub with its access to talent, capital and government support, and strong consumer purchasing power in the region, according to Tokyo-based Fermata, which markets femtech products.

After Singapore, Ferne has its eye on Thailand and the Philippines, according to Whang.

Ease Healthcare, another Singapore startup last year, works with local doctors and pharmacists to offer consultations, birth control pills and tests using its online platform. About 20,000 people have created accounts with the company, half of whom have actually paid for services.

In September, the company announced a $1.3 million seed round led by Insignia Ventures Partners.

"As a birth control user myself, I have had difficult experiences accessing contraception in Singapore," said co-founder Guadalupe Lazaro. "It is difficult to find doctors who are open and happy to talk about these issues with you," she said.

The pandemic induced Ease Healthcare to launch earlier than originally planned. One reason was clinics cutting back on health care services, including birth control, because they were only allowed to provide "essential services."

Ease Healthcare hopes to expand a supportive community for people to share their experiences. "Health care isn't just about getting services," said Rio Hoe, another co-founder. It is also about "an environment where you are able to take control of your health."

Hurdles for femtech remain in Japan, according to Amina Sugimoto, co-founder Fermata. One reason is that the concepts underlying many femtech products are new and no guidelines exist for them. "There are many things that are not clear about whether they are classified as medical devices, quasi-drugs or cosmetics," said Sugimoto.

Fermata announced last year a femtech fund, but much needs clarifying, particularly with relevant authorities, before investments can be made, Sugimoto said. "We are creating the environment that enables sales of such products."

Politicians are taking note. Members of the ruling Liberal Democratic Party formed a parliamentary lobby to promote femtech last October. Femtech was also included in the government's basic policy on economic and fiscal management and reform this year.

Sugimoto believes some companies are interested in the topic of women's health and femtech for their credentials in support of the United Nation's Sustainable Development Goals and diversity. But she does not want femtech to just be a passing fad. "We want it to be something that exists naturally" as part of accessible health care for all, she said.