Flipkart and Amazon square off in India's $7bn festive season 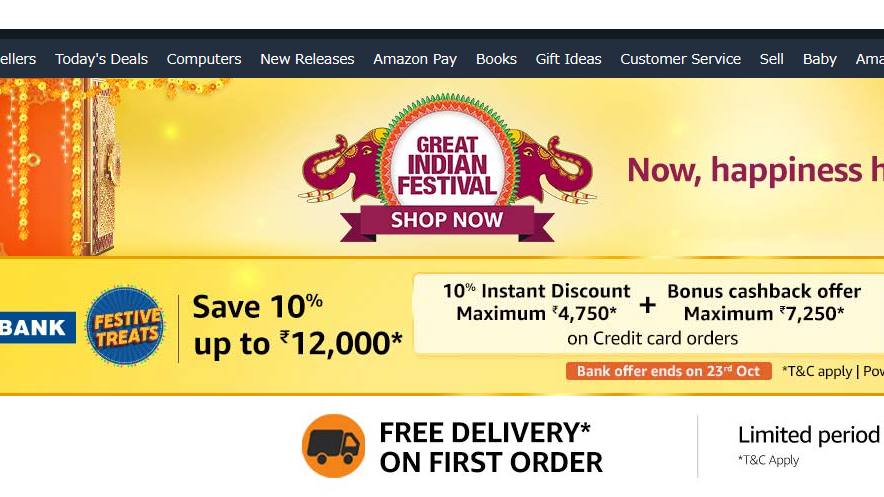 NEW DELHI -- India's traditional festive shopping season has begun and the country's top e-commerce platforms, Walmart-owned Flipkart and Amazon, are trying to outdo each other with sales as well as fending off a fresh challenger, Reliance Industries' newly launched e-commerce venture JioMart.

The coronavirus pandemic has cast a pall over the season this year with India having the second-highest number of total cases in the world behind the U.S. Still, research companies expect e-commerce sales to hit $6.5 billion to $7 billion in this festive season. Sales are expected to be significantly higher than the same period last year, as many consumers are still reluctant to shop in-person due to the continuing pandemic in India.

The country's biggest festival, Diwali, is a little less than a month away on Nov. 14 and is preceded by a number of other celebrations, including the nine-day Navratri that kicked off on Saturday and Dussehra, which falls on Oct. 25. E-commerce companies offer huge discounts on smartphones, laptops, home appliances, furniture, apparel and others.

While Flipkart's sale ends Wednesday, Amazon's lasts until Diwali, and both are offering deep discounts of up to 80% on a wide range of products. To further sweeten these deals, the e-tailers have joined hands with banks and other digital financial services to extend additional discounts, cash refunds and no-cost fixed monthly installment offers. 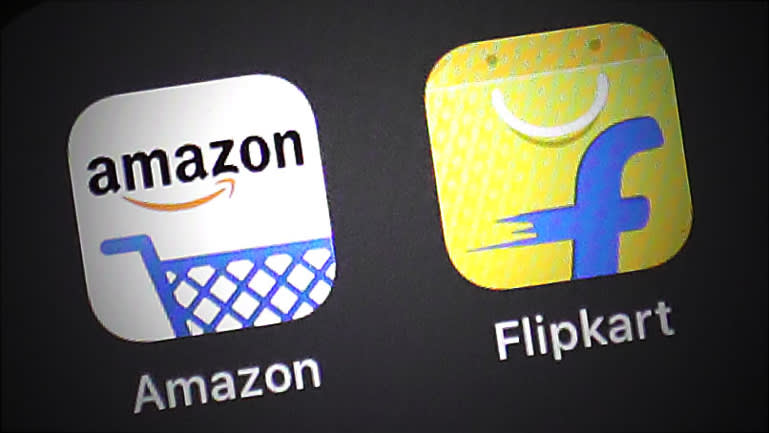 The logos of Amazon and Flipkart. The two rivals will also compete with Reliance's JioMart, which is expected to gradually expand its merchandise lineup.

"There is a lot of competition [during the festive season] between Amazon and Flipkart, and this year JioMart is there as well. Basically, all household categories will see some kind of boost as compared to last year," Arvind Singhal, chairman and managing director of retail consultancy Technopak, told Nikkei Asia.

He said categories such as clothing, footwear, kitchen, dining, consumer durables and furniture will see "bigger growth" this year, while smartphones have remained a "hot category" for several years. Other e-tailers offering mega deals during the period include Snapdeal, Paytm Mall, ShopClues and the newly launched online Apple Store.

Amazon, under a "limited time deal," sold the iPhone 11 (64GB) for 47,999 rupees ($650), a more than 25% discount. Apple's first online store in India, launched last month, offered the same product for 54,900 rupees along with a free pair of Air Pods worth over 14,000 rupees, starting on Saturday but stocks reportedly sold out within a couple of hours.

For smartphone enthusiasts looking for a thriftier option, Flipkart offered far lower prices. It was selling the Chinese Realme 7 (128GB) smartphone at 16,999 rupees, a19% discount, on the opening day of its sale.

According to a report last week by U.S.-based market research company Forrester, online retailers in India are expected to generate about $6.5 billion in sales during this year's festive month until Nov. 15, with 75% of sales between Oct. 15 and Oct. 21. 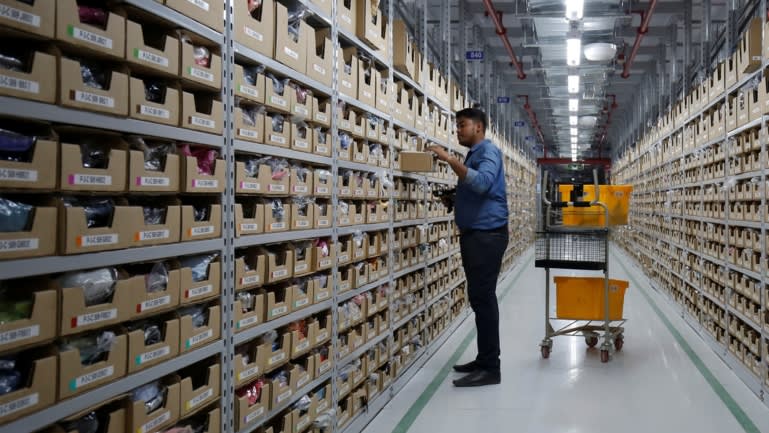 An employee works at an Amazon warehouse on the outskirts of Bangalore. Local e-tailers in India are also competing to expand their distribution networks.   © Reuters

"Online retail spending during the festive month will see a growth of 34%" year-on-year, Forrester said, projecting that smartphone and fashion will account for 50% of total sales with Flipkart maintaining the lead due to its strength in both categories. "Grocery will emerge as the fastest-growing category, as most of the festive-themed categories within grocery move online, aided by the increase in basket size during this period, as well as the buzz created by JioMart."

Ahead of the sale, Amazon said there would be more than 900 new product launches from top brands such as Apple, Samsung, Sony, LG, Panasonic, Xiaomi and Oppo. It said it had "ramped up its delivery infrastructure, adding nearly 200 delivery stations and tens of thousands of delivery partners to its network."

Flipkart said it had increased its last-mile reach with more than 3,000 facilities across the country. "This expansion will also help [hundreds of thousands] of sellers, [micro, small and medium enterprises] and artisans from smaller towns to connect with a pan-India consumer base through Flipkart's supply chain," the company said.

However, Manoj Gairola, a New Delhi-based telecom sector analyst, is not so optimistic about sales this year. "People have lost jobs as businesses suffered because of COVID-19, and the country's growth witnessed a historical decline," he told Nikkei, pointing to a 23.9% year-on-year contraction in gross domestic product in the April-June quarter.

The International Monetary Fund this month predicted India's economy will shrink 10.3% in 2020, sharply revising downward its June forecast of a 4.5% contraction. "Even if an iPhone is selling at a steep discount, how many people here have that kind of money to buy it?" Gairola said. He added that cheaper brands were also unlikely to do well because of widespread job losses and wage cuts in the wake of the pandemic.

"In the past, consumers had been spending enthusiastically during the festive season as the working class used to receive Diwali bonus from their employers, which is not the case this time," he said.

The Confederation of All India Traders, which has a membership of about 70 million, has termed the deep discounts being offered by Flipkart and Amazon as "predatory pricing." In a letter to the government, it requested that either such sales be banned or a special task force appointed to monitor them to ensure that there are no goods and services tax revenue losses to authorities.

That indicates that owners of traditional brick-and-mortar stores have a strong sense of crisis amid the pandemic. Overall online sales "will certainly increase, maybe at the cost of physical retail this time," Technopak's Singhal said.