Street vendors sell vegetables in Yangon. For many locals, it has been standard practice to cope with risks without insurance. (Photo by Ken Kobayashi)

YANGON -- Myanmar's insurance market will soon face a sea change led by technologies and expertise brought in by foreign companies.

A total of 14 foreign insurers will enter the Southeast Asian country's market by the end of this year through either wholly owned subsidiaries or joint venture companies with local peers, the Nikkei Asian Review has learned.

A greater variety of insurance products is expected to appear as Myanmar's government plans to open its insurance market to foreign companies and ease regulations simultaneously, making it possible to use information obtained through the latest technologies such as artificial intelligence and satellites.

"I don't have any insurance. I have been living for 38 years without insurance and I don't think I need it," said Nyi Nyi, a 38-year-old man working at a company in Yangon, Myanmar's biggest city. For many locals, it has been standard practice to cope with risks without insurance.

If they fall ill, they make do with painkillers and traditional medicines available at pharmacies. If they cause a traffic accident, they settle out of court by paying compensation within their ability to do so. 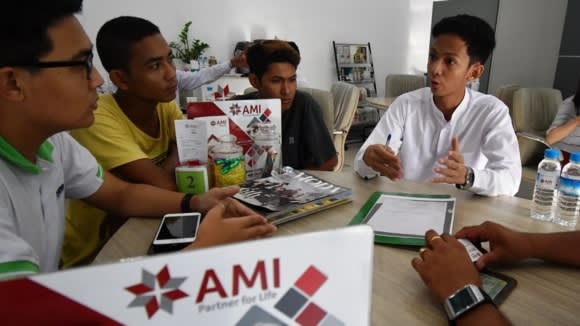 Myanmar has an estimated population of 54 million. The insurance penetration rate -- the ratio of premium income to gross domestic product -- is extremely low there, compared with its neighbors in Southeast Asia.

The rate in Myanmar stood at 0.24% in 2018 -- 0.19% for general insurance and 0.05% for life insurance -- much lower than 0.79% in Cambodia, whose per capita GDP is at the same level as Myanmar and which opened its insurance market to foreign competition earlier.

This is the biggest reason Myanmar's insurance market is considered promising. The foreign insurers could open the curtain on a new era.

In January, the Myanmar government launched the process to open up its market to foreign insurers. In April, five foreign life insurers, including AIA, Manulife and Prudential, were allowed to enter the market through wholly owned subsidiaries.

Anil Wadhwani, president and CEO of Manulife Asia, welcomed the government's decision to embrace foreign insurers in the market.

"The move to open up Myanmar's insurance market is a step in the right direction," he said, adding that it will be "instrumental in spurring the country's ongoing development, boosting competition and driving greater insurance penetration." Foreign insurers have waited for the market to open up for nearly five years. In 2013, the country lifted a ban on private insurers as part of economic reforms associated with the transition to civilian rule. A year later, the government allowed three Japanese insurers to do business in the Thilawa special economic zone, near Yangon, without local partners, hinting at a future full-scale opening of the market.

The entry of foreign insurers brings capital investment, new technology and operational know-how to Myanmar's insurance market. They are likely to include efficient delivery of insurance services to many customers, as well as innovative insurance products that apply data gathered through latest technologies.

"We will deploy digital tools and services on the front end, supported by automated processes and systems at the back end," Nic Nicandrou, chief executive of Prudential Corporation Asia, told the Nikkei Asian Review. "We intend to embrace a digital-led, customer-centric strategy in Myanmar to broaden access to life insurance and provide a seamless end-to-end experience to customers."

The British insurer has life insurance operations in 12 markets in Asia and holds the top three positions in eight of them, including Laos and Cambodia, where the company established its operations in 2016 and 2013. Similar to these emerging markets, Prudential "will start off by offering simple-to-understand and affordable protection and savings products, targeting the masses," Nicandrou said. "Technology is a key focus for us."

As an example, Nicandrou revealed a plan to bring in AI technology to customers in the region. "We will soon be launching our new all-in-one mobile application in Asia, beginning with Malaysia this year. It will be the first app of its kind to offer AI-powered health information to millions of people in the region including Myanmar, empowering them to take control of their health and well-being anytime, anywhere," he said.

Sompo Japan Nipponkoa Insurance aims to sell to Myanmar farmers a product that covers income shortfalls due to droughts and floods, using satellite imagery to determine the extent of damage. The company has applied to the government for a license to establish a joint venture with AYA Myanmar Insurance, affiliated with Myanmar's second largest bank.

The weather index insurance product the Japanese company aims to introduce uses precipitation data based on imagery taken by remote sensing satellites, in determining insurance payments. By paying a low premium for the policy, farmers stand to receive insurance money if they are judged to have suffered from a drought or flood, so they could receive compensation for their income shortfalls. Satellite data will be prepared in a way that allows the insurers to set objective judgment criteria in a country like Myanmar, where ground-level precipitation data is not readily available.

In a joint effort with state-run Myanma Insurance and Myanma Agricultural Development Bank, Sompo Japan is currently running a pilot project to test the weather index insurance in two rural location of the country. Keiji Okada, chief representative of Sompo Japan's Yangon office, said the Myanmar government appears ready to allow insurance companies to use banks and microfinance providers as sales channels for the product.

"The use of insurance is going to spread to farmers and small businesses vulnerable to abnormal weather conditions," Okada said. "Financial services will become more inclusive."

Digital technology plays an important role in the joint endeavor, as "it increases flexibility in terms of distribution channels," according to AYA Myanmar Managing Director Myo Min Thu.

"If the government allows us to distribute insurance through bank branches, microfinance institutions or mobile digital channels, it will be easier to distribute small-ticket size insurance to the masses at the lower end," Myo Min Thu said.