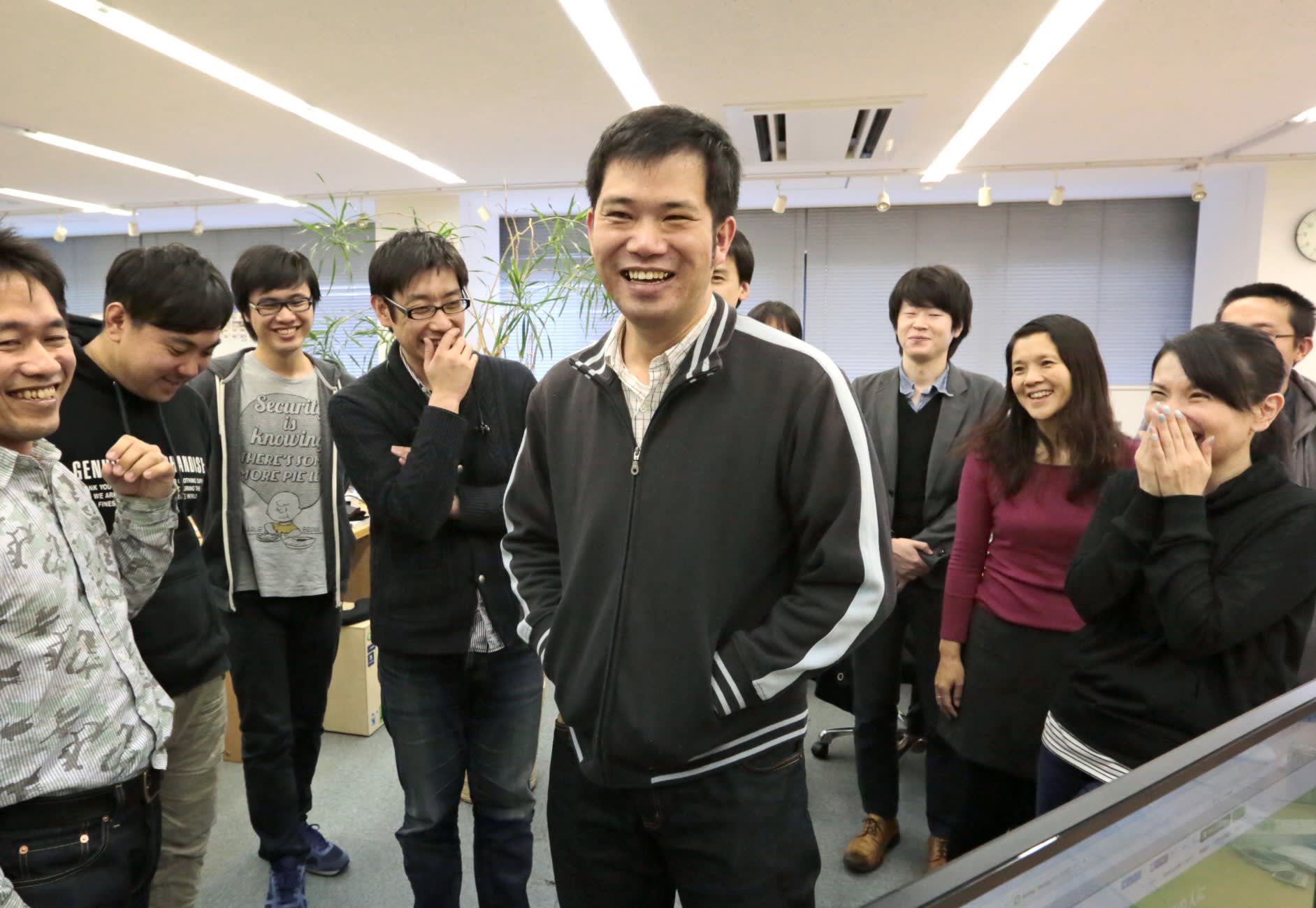 Nulab CEO Masanori Hashimoto, a key member of Myojowaraku, wants to "create an atmosphere that encourages the production of new things."

FUKUOKA, Japan -- The city of Fukuoka, on Japan's southern main island of Kyushu, is fast becoming a center for startups. Thanks to efforts to encourage young people to start their own companies, it now has the highest business formation rate among the 21 biggest cities in the country.

The scheme has attracted numerous young entrepreneurs since it was launched five and a half years ago.

In January, Medmain, a developer of software that aids medical diagnosis using microscopic images, was founded in the city.

The company is led by Osamu Iizuka, a fourth-year student at Kyushu University's School of Medicine. Iizuka is also a member of the university's "startup club," which was set up in June last year.

Iizuka says his artificial intelligence-assisted diagnosis software can yield results in around a minute after analysis of a tissue sample.

The club has quickly gained popularity since it was launched by like-minded students and Masaki Kumano, an associate professor of entrepreneurship. It now has about 150 student members.

The club's activities focus on developing business plans through group work, with advice from Kumano as well as corporate managers. The members then participate in an external contest. Kumano himself has entrepreneurial experience and led a similar program at Sojo University in Kumamoto.

After Iizuka had polished his plan through the club activities, he entered a contest last fall held by a broadcaster in San Francisco, coming out on top among 15 teams from around the world.

Some 50 to 60 more students are expected to join the club this academic year.

"Students are highly motivated thanks partly to a surge of local interest in the initiative," said Kumano. "I intend to have them establish 50 companies in the next 10 years and launch initial public offerings by five of them."

Fukuoka is a major commercial hub in Kyushu, and attracts young people from all over the region. At the beginning of the 2010s, momentum started growing toward encouraging young people to start businesses in the city. Members of Kyushu University's startup club pose for a photo.

One result is Myojowaraku, an annual technology and creativity festival which started in 2011. Startups often announce their business plans there, and various other events are also held, such as information technology-related study meetings, live music performances and a "cosplay convention."

"We wanted to create an atmosphere that encourages the production of new things," said Nulab CEO Masanori Hashimoto, a member of the team behind Myojowaraku. He founded his company, a developer of software that supports communication and collaboration, in the city in 2004.

Mayor Soichiro Takashima, who took office in 2010 at the age of 36, declared in September 2012 that he would aim to make Fukuoka a "startup city" in response to growing interest in creating companies among local young people.

In 2014, Fukuoka was designated a national strategic special zone, with looser tax and other regulations. The municipal government eased visa requirements for foreign entrepreneurs in 2015 and introduced a system to cut the "corporate citizen tax" for startups in 2017.

These moves by the public and private sectors have resonated with many young entrepreneurs.

Skydisc, a developer of technologies applicable to the internet of things, was established in Fukuoka in 2013. It became the first company to take advantage of the city's tax reductions for startups.

"What I found encouraging is not the amount of the tax cut but the overall stance of the municipal government to support startups," said Skydisc CEO Osamu Hashimoto.

According to the Fukuoka Asian Urban Research Center, an incorporated public interest foundation, the city's entry rate -- the percentage of new businesses among the total number of companies -- stood at 7.04% in the year ended March 2016. The city has held the top slot among Japan's 21 largest cities in terms of business formation rate for three years in a row.

But there is more to being a "startup city" than simply encouraging the launch of new businesses.

In April 2017, a startup support facility, Fukuoka Growth Next, opened in the central part of the city's Tenjin district, the biggest shopping and entertainment area in Kyushu.

More than 100 companies have registered to use FGN, which was established through a partnership between the public and private sectors and set up in what used to be an elementary school.

The facility houses co-working offices and workshops. It also has a space for eating and drinking to allow exchanges among entrepreneurs themselves or between entrepreneurs and investors.

"I want to move my company's head office to Fukuoka by the end of the year," said Digilead CEO Toshio Otsubo. Digilead currently has a sales office inside FGN but is based in Naha, Okinawa Prefecture. The company started offering its "O-chat" AI chat platform service on a trial basis in October 2017.

"Enthusiasm for new businesses is mounting in both the public and private sectors. Furthermore, it will be easier to pitch ourselves [in Fukuoka], compared with Tokyo, which is saturated with startups," said Otsubo.

Mountain rescue service company Authentic Japan set up an office at FGN after its president was attracted by the atmosphere.

"This place is a chaos where all kinds of people gather," said Kazufusa Kuga, who founded the company seven years ago, comparing FGN to the early state of the universe. "That pulled us in." 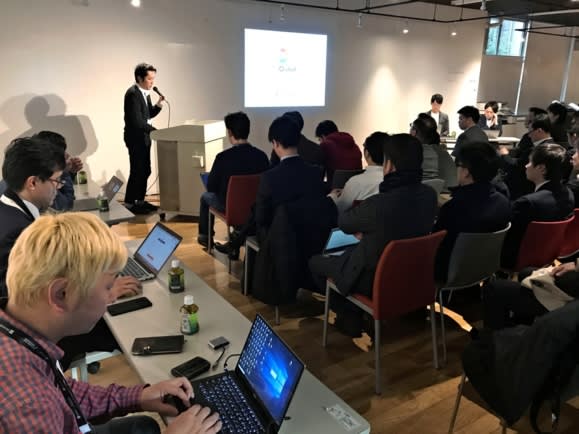 Participants attend a seminar at Fukuoka Growth Next.

In May 2016, the company started a service that provides small radio transmitters to carry when trekking in the mountains. If the subscriber gets lost or stranded, a helicopter can be dispatched to locate the user using a signal from the device. Six operators contracted for the service are ready to dispatch helicopters to anywhere in Japan, except for the southernmost prefecture of Okinawa, as soon as they receive a request. Subscribers now total about 10,000.

Three-year-old software developer Alterbooth, which has a satellite office in FGN, has technology that enables application programs to run in separate packages, or virtual containers, independent of the environment. This gives the system the ability to more easily recover from a failure or to expand.

In February, Alterbooth raised 37.5 million yen ($343,000) through a private placement of shares to a local information systems developer. It aims to use the funds to hire more engineers.

FGN succeeded in raising over 3.7 billion yen, significantly exceeding the targeted 500 million yen, in its first year of operation. Yasunari Tanaka, director-general of the FGN secretariat and president of a subsidiary of Tokyo real estate broker Apaman, said the incubator aims to produce "unicorns," or unlisted companies whose corporate value exceeds $1 billion.

"Large companies are securely incorporated into our circle of supporters, which is not something possible in other regions," Tanaka said.

According to Tokyo's Japan Venture Research, funds raised by unlisted Fukuoka Prefecture companies totaled 11.5 billion yen in 2017, a threefold jump from 2016 -- although that is still about one-eighteenth what their Tokyo counterparts obtained.

A challenge for Fukuoka startups is the lack of local companies to serve as role models in terms of successful IPOs, according to some local entrepreneurs and investors, many of whom claim the city needs graduate from being just a magnet for young entrepreneurs.